Not crocodile tears: Over 500 crocs to be rendered homeless at the Statue of Unity, so a sea plane can land

Sardar Vallabhbhai Patel has many sobriquets — freedom fighter, founding father of the Indian Republic, Iron Man of India, and the man who integrated India into a unified nation.

He has a new moniker now — the man who fragmented the habitat of the mugger crocodiles.

Or maybe, his successors who built Sardar’s statue — ostensibly of unity — are better claimants to the moniker.

Collateral damage seems to be the least of concerns for the multi-level committee — comprising officials of the Civil Aviation Department, Airports Authority of India and Gujarat government — when it comes to issuing and following tall orders for promoting the world’s tallest statue. News has it that the Airports Authority of India and the Department of Civil Aviation had come up with a feasibility report about introducing a seaplane service in the period immediately preceding the public launch of the Statue of Unity. 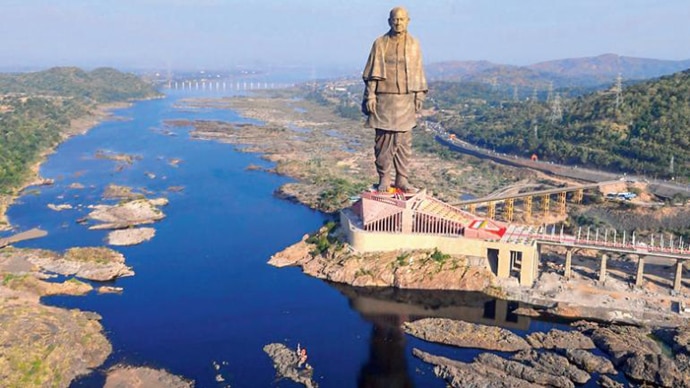 Would Sardar Patel have wanted the crocodiles rendered homeless for his statue? (Source: PTI)

To make way for the seaplane service planned for the terminal to connect cities of Gujarat to the Sardar Patel statue site, the Gujarat Forest Department has started evacuating crocodiles from two ponds on the Sardar Sarovar Dam premises on the Narmada.

There are two ponds close to the statue. The Panchmuli lake (pond no. 3) and the Khalvani Lake (pond no. 4) — known locally as the ‘Mugger Talav’ (crocodile pond), are the home to nearly 500 crocodiles.

According to reports, as of last week, 15 crocodiles were lured into cages using fish as bait, removed from the pond and transported on the back of pick-up trucks. The final destination of the crocodiles was not decided even when they were removed from the pond. Reportedly, the crocodiles were in the custody of the Forest Department for about a week. Then, according to Dr K Sasi Kumar, Deputy Conservator of Forests, Narmada, after considering the possibility of releasing them in their “natural habitat”, it was decided to let them out into the reservoir of the Sardar Sarovar Narmada Dam. “We are rescuing the crocodiles from Ponds 3 and 4, which are close to the site. 10 teams of officials have been deployed for the same,” Kumar added. Suddenly homeless: They look fierce but these crocodiles are helpless in this situation. (Source: Wikimedia Commons)

According to a top official of the Sardar Sarovar Narmada Nigam Ltd (SSNNL), who spoke to the media on the condition of anonymity, “For many years now, the Forest Department has been releasing crocodiles into the reservoir of the dam, apart from the main canal, the Ajwa reservoir and other canals. This particular exercise involves hundreds of crocodiles. It may not be possible to release all into the reservoir in one go. They will have to be distributed in other places as well. It is most likely that a lot of these crocodiles could end up going back closer to the human habitats from where they were once rescued and brought to the Narmada.”

Mugger crocodiles are also called marsh crocodiles. They lay eggs in the marshy banks of water bodies where they also dig burrows and retreat when the temperatures are too hot or too cold. Now, if the crocodiles are relocated to reservoirs (which have concrete banks at an incline), the females would not be able to climb out to lay eggs.

Furthermore, as mentioned by the senior official, the Forest Department has already been releasing crocodiles into the reservoir of the dam. Now, with a sudden influx of crocodiles that are being relocated from this mugger talav, there would be a sudden increase in demand for prey, besides habitat degradation, owing to overpopulation.

The mugger crocodiles (Crocodylus palustris) in the Narmada fall under Schedule 1 of the Wildlife Protection Act, which covers the most endangered species.

Already extinct in Bhutan and Myanmar, these crocodiles are listed as ‘Vulnerable’ on the International Union for Conservation of Nature (IUCN) Red List since 1982. The Narmada — portrayed as a goddess — has a crocodile as her vahana (vehicle). If this is how we treat even our religious symbols, we need to collectively rethink our morals.

The move has, quite expectedly, come under strong criticism from wildlife experts.

Have we collectively lost our minds? https://t.co/sGCj2KWgAQ

Dr Jitendra Gavali, Director, Community Science Centre, Vadodara, called the transfer of reptiles in such large numbers for making a seaplane terminal “against the principles of the Wildlife Protection Act”. Warning that the crocodiles may be harmed, he pointed out that officials can’t even be sure of their exact number in the ponds.

“Moreover releasing them into the dam reservoir would mean that the female crocodiles may not be able to nest if the slope of the dam is more than about 40 degrees. Crocodiles need space on land to nest and also to come out of the waters during winters… If the government has spent crores of rupees making the Statue of Unity, it should spend some more money to make an artificial pond for landing the seaplanes without disturbing the ecological balance and natural habitat of crocodiles,” he reportedly said.

If Sardar would have been alive, he may have shed tears on the plight of these helpless and hapless muggers.

And we are sure they wouldn’t have been crocodile tears.

Also read: Five reasons the Statue of Unity is not as wonderful as the government would have us believe