One of the many important learnings from the renowned physicist's life and work is - if you are a (wo)man of science, your sense of humour will be refined.

Great scientists generally have a great sense of humor. Richard Feynman, a unique mind, an extra-ordinary physicist, a Nobel prize winner, was an extremely funny guy. Yet it's difficult to come anywhere close to Stephen Hawking's sometimes arrogant and sometimes self-deprecatory sense of humour.

If you were to be fortunate enough to be in Hawking’s physical vicinity, and you made a comment or a statement that Hawking thought was nothing but non-sense, he would run his wheelchair over your foot. That was his own unique way of telling you to buzz off, you are wasting his time.

Stephen Hawking was the first one to make fun of his disabilities. One of his closest friends Roger Penrose, with whom he did extraordinary work on mathematical singularities, while introducing Hawking to an audience, well after Hawking was paralysed and wheelchair-bound and had just become a father again, said, “ …the fact that he just became a father shows that some of his body parts are working.”

Numerous jokes in the TV series, The Big Bang Theory, on his speech impediment and other disabilities go on to prove that Hawking had a terrific sense of humour and was never shy of laughing. His only condition would have been that the jokes be extremely smart. Otherwise he would not shy away from his famous “running over the foot”, routine. 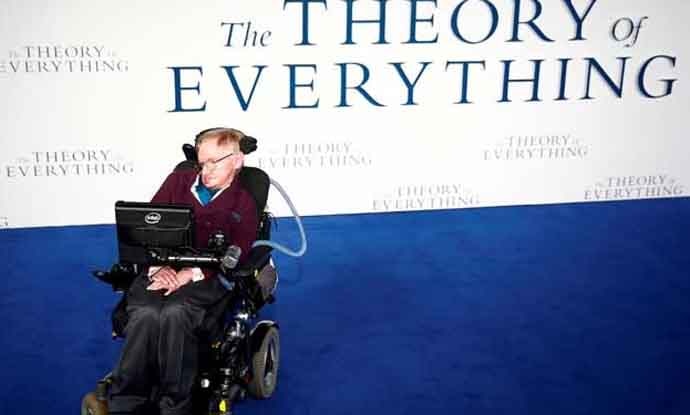 Stephen Hawking at the UK premiere of The Theory of Everything, which was based around his life, at a cinema in central London in 2014. (Credit: Reuters photo)

Hawking was a great advocate of a “singularity” out of which the universe was created at the The Big Bang. The Big Bang created space, time and matter. In his path-breaking bestseller, A Brief History of Time, Hawking mentions a conference organised by the Jesuits in the Vatican on cosmology. He mentions how the Pope told the experts on cosmology that "it's okay to study the evolution of universe after the big bang but we should not inquire into the big bang itself because that was the moment of creation and therefore the work of God".

He later goes on to say, "…I was glad then that he did not know the subject of the talk I had just given at the conference - the possibility that space-time was finite but had no boundary, which means that it had no beginning, no moment of creation. I had no desire to share the fate of Galileo, with whom I feel a strong sense of identity, partly because of the coincidence of having been born exactly 300 years after his death."

I, for one, would have loved Hawking telling the Pope that space-time had no boundaries and there is no moment of creation. But as he cheekily mentions that he did not want to share the fate of Galileo, he very subtly made a scathing remark on organised religion. After all, how many religious gurus who profess love, peace and art of living have a sense of humour or are open to self critique? Stephen Hawking with his second wife Elaine at the stand of German bookseller Rowohlt at the Frankfurt book fair in 2005. (Credit: Reuters photo)

One of the many important learnings for me from Hawking’s life and work is - if you are a (wo)man of science, your sense of humour will be refined. The more scientific your inquiry is, more cutting edge and irrefutable is your critique.

Many years back when Stephen Hawking visited India, he had an audience in Delhi where people were asking him questions on astrology. Needless to say Hawking wanted to trample many feet that evening in Delhi. But it says something about us Indians. The world’s most celebrated cosmologist was expected to assume the role of a neighbourhood astrologer. For most Indians there is no difference between cosmology and astrology. While Hawking’s work on cosmology was the coming together of Einstein’s general theory of relativity and quantum mechanics, an astrologer’s work is a proven fraud, a pseudo-science. Yet we did ask Hawking about astrology.

What does that say about our scientific temperament as a nation? I think it will be safe to say we lack one. One politician says, “theory of evolution is hokum because our elders have not seen an ape turning into a man”, another one says, “my astrologer knows more than NASA scientists”. One judge enlightened us on procreation process of peacocks, some other politician said that cow is the only animal that inhales and exhales oxygen. Mind you, we do have a large section of our society that believes in all of the above.

But this piece is about a man of science. Stephen Hawking was one of the greatest minds of our times. His contributions to our understanding of the universe has become part of our everyday lexicon. He made the word “black hole” popular with the common man.

Stephen Hawking would have been a delight to Albert Einstein. After all, Hawking made significant contributions to the unification of the general theory of relativity with quantum mechanics, which perhaps was the single greatest intellectual quest of 20th century physics.

Hawking’s famous debates on physics and philosophy with a close friend and an equally accomplished British theoretical physicist Roger Penrose were a delight for a science lover. The debate has since been complied into a book, The Nature of Space and Time.

In the beginning of the last century when quantum physics was over-riding classical Newtonian physics in explaining the universe, Albert Einstein who forever had an affinity to a clockwork universe had a similar debate with Niels Bohr. The Einstein-Bohr debate was considered to be one of the greatest intellectual exercise of the last century. The Hawking-Penrose debate is no less. But with Hawking, you could always expect cheeky.

He and Penrose used to bet the loser would gift the winner an annual subscription of Playboy and Penthouse. Hawking preferred Playboy.

Stephen Hawking’s work is humongous. Particularly interesting was the extension of his own idea of singularity theorem. He theorised that universe might have started as a “singularity”. A singularity where all matter, space and time are crunched together. It was a revolutionary idea, one he has so eloquently explained to a layman in A Brief History of Time.

Stephen Hawking is dead. When diagnosed with ALS at the age of 21, his doctors gave him two years. Yet he lived till 76, that too without a havan, umra, or a prayer or an astrologer’s stone.

No RIPs for Dr Hawking, it’s unscientific, otherwise if he were alive he would run his wheelchair over your foot.

#Obituary, #Cosmology, #Physics, #Stephen Hawking
The views and opinions expressed in this article are those of the authors and do not necessarily reflect the official policy or position of DailyO.in or the India Today Group. The writers are solely responsible for any claims arising out of the contents of this article.