The government is likely to make LG Polymers pay a significant portion of the relief handed over to the victims.

Hours after the news of the styrene gas leak in Visakhapatnam became public, Andhra Pradesh Chief Minister YS Jaganmohan Reddy announced a compensation of Rs 1 crore for every family that lost someone in the tragedy on Thursday.

The speed at which the compensation was announced has left the Opposition surprised. The state government sanctioned Rs 30 crore to the District Collector of Visakhapatnam from the Chief Minister’s Relief Fund through a government order issued on Friday. Minister for Agriculture and Cooperation Kurasala Kannababu said the sanction to release the money came in quickly so that the agony of the families could be meaningfully assuaged.

Meanwhile, Jagan, who flew in to Visakhapatnam soon after the newsbreak, went straight to King George Hospital where the victims were admitted, and spoke to them.

The gas leak happened at LG Polymers, which was set to reopen after the lifting of lockdown restrictions. The gas spread to at least five villages close to the foothill of the temporal abode of Varaha Lakshmi Narasimha Swamy temple in Simhachalam.

At least seven people died immediately of asphyxiation and two others because of an accidental fall into an open well. The two could not see because the gas had blinded them. Two others succumbed at the hospital. 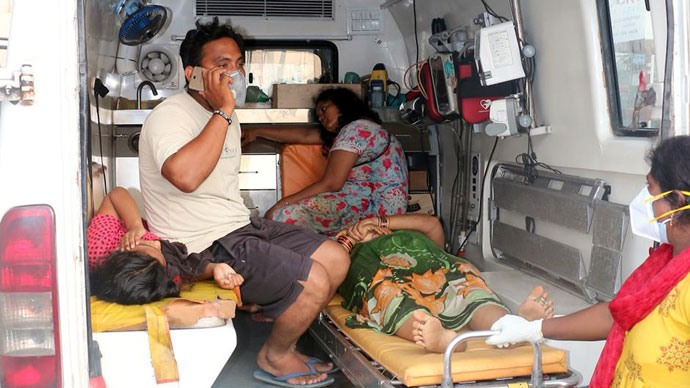 Even as Jagan visited the victims in hospital, the government instituted a probe, headed by Special Chief Secretary of Environment Neerabh Kumar Prasad.

Lamenting the loss of lives, Jagan said that though he cannot get the deceased back to life, “As a man with a kind heart, I would like to assure them that I would stand by these families. Every bereaved family would be given a compensation of Rs 1 crore, whatever be the contribution of the company out of that sum. How much the company would pay up and how much the government should match would be decided between the state and the company. But every bereaved family would get Rs 1 crore.

“Similarly, those who were being treated on a ventilator, would get Rs 10 lakh as a compensation. The ones undergoing treatment for two to three days in the hospital would get Rs 1 lakh each, while those who underwent primary treatment would get Rs 25,000 each. This apart, every individual in the affected villages – the total number is estimated to be around 15,000 — would get a sum of Rs 10,000 each,” the chief minister announced.

There is a reason why the compensation has been kept so high. Even though it wasn’t discussed aloud immediately after the incident, Jagan made the announcement soon after a review meeting with ministers, officials and elected representatives.

In June 2014, Jagan visited Nagaram village, as an opposition leader, shortly after a corroded pipeline of the state-owned Gas Authority of India Ltd (GAIL) exploded. Nineteen people had died in that tragedy. Jagan met the victims and demanded a compensation of Rs 1 crore for every victim family.

Now in power, Jagan has done what he demanded as an opposition leader.

LG Chem, whose subsidiary LG Polymers is, in an official statement said, “We would like to express our deepest condolences to the deceased and their families. At this moment our top priority is to work closely with the local government and the authorities to ensure medical help is provided to all those who have been affected by this incident.

“As a responsible global citizen, it is our responsibility to ensure the health and safety of all local residents and our employees. We have mobilised our technical teams to work with the investigating authorities to arrive at the exact cause of the incident.”

According to the government, concerted efforts are being made by experts in the field to neutralise possible traces of styrene in the area.

Though the compensation has been released by the government, it is being said that the government would recover the maximum portion from the company. Whoever pays, the Visakhapatnam gas tragedy has indeed set a new benchmark in terms of compensation to be paid to the victims.

#Lg polymers, #Gas leak, #Jagan mohan reddy, #Styrenegasleak
The views and opinions expressed in this article are those of the authors and do not necessarily reflect the official policy or position of DailyO.in or the India Today Group. The writers are solely responsible for any claims arising out of the contents of this article.