A riveting excerpt from Romesh Gunesekera’s coming-of-age novel that explores difficult friendships and sudden awakenings in the backdrop of the changing face of Ceylon.

Presenting an exclusive excerpt from Suncatcher by Booker Prize-nominated author Romesh Gunesekara. The coming-of-age novel is set in Ceylon (now Sri Lanka) in the mid-1960s. It explores friendships and awakenings, charting the loss of innocence, search for love and consolation against the backdrop of a country on the brink of social, political and economic changes. 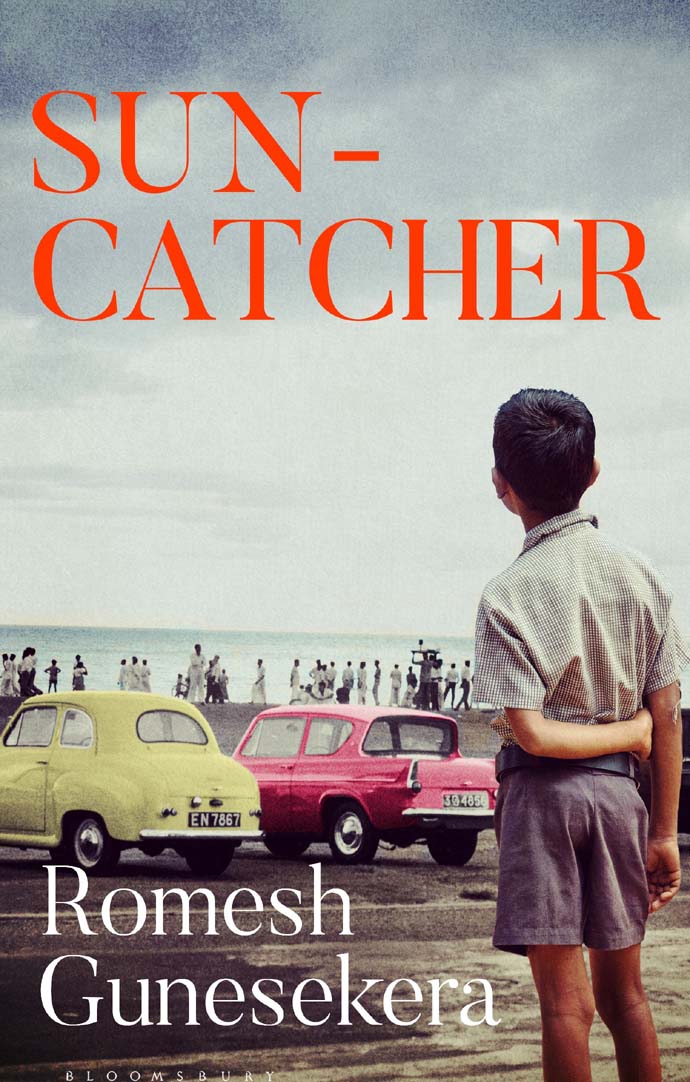 When he had finished the last of the milk, Jay pushed his empty bottle to one side and wiped his lips, manfully, with the back of his hand. I sucked the final drops of mine through my straw and did the same.

'Come on,' Jay wheeled his bike around. 'Show you something phenomenal.'

'Be careful,' Mahela called out.

Jay led his two-wheeled horse in through a gap in the shrubbery and onto the outer verge of the racecourse; I followed, stepping gingerly between the razor leaves and cat's tails. Ahead, the unkempt turf curved in an arc around the building works; the flaky white wooden poles of the main track leaning to take the turn.

Jay checked over his shoulder. 'Another race?'

'Made for horses: Arabians, thoroughbreds.' They were all in my father's racing almanac.

'So, you know the genus Equus.' Jay recoiled widening his eyes in exaggerated surprise. 'But now, use your imagination.' Then he mounted his bike and was away before I could show off some more.

Only power and technique, not imagination, could get wheels moving in such thick grass. Jay had the knack. He drew ahead. One of the white poles marking the circuit had come off and he charged through and across the sand track into a bank of green and purple sage. On the other side of the bushes, pieces of colossal concrete macaroni and fattened cement cubes lay scattered; the main paddock had been gouged out.

'Come up here,' Jay called out scrambling up to the top of the biggest of the piles of building blocks.

Joining him at the top, I found we were higher than anything else around: the milk bar, the old flame trees, even the grandstand on the far side looked puny in the velveteen light. Jay oblivious, shielded his eyes and pointed to the horizon. 'Look, can you see them?'

A seam of perforations appeared in the sky, dot by dot, stitched by the rhythmic flap of black wings, growing larger by the second, blotching the amber sky in dark puffs with every beat.

'Bats. Amazing, no? Every evening they come this way. Two by two, in one beautiful straight line.'

'It's a formation. Like bombers going on a raid.' I'd never noticed them before.

'There are always two at the head. I wonder how long a pair lasts.'

I stole a glance at him, wondering what he meant. Was any join also a potential fault line? At home, between my parents, small differences quickly grew large, needles turned to spikes.

'Is the feeding ground nearby?' I was keen to show we had a common interest.

'We could start over in Havelock Town tomorrow,' I suggested, surprising myself. 'The grounds there.'

'Yeah?' The peaks of his cheekbones softened in the light of the sinking red sun.

'Sure.' I tried to absorb the glow. 'I live that side, on Grebe Road.' Halfway to nowhere, until now.

'Okay.' I kept my voice steady, avoiding any thought of what might happen if he were not to appear.

Inside our house on Grebe Road, on the edge of Colombo's newest residential block, the morning sun never reached the breakfast table. Our beige curtains were permanently drawn. The next morning the gloom hung heavier than normal.

'It is utter chaos.' My mother dropped the telephone handset back in its cradle and sharpened the dark look she gave my father. Although slight in size, she had a high forehead and a tense mouth. 'Dilini says no classes again. School closed.'

'Those madcaps probably think idleness might be the best hope for the youth of today.' My father dismissed her worries and opened the back issue of Tribune he often returned to in times of uncertainty. He relied on a comfortable compromise between idealism and action which now, with socialism back in the fray, was beginning to show some strain.

My mother, a modern convent girl, preserved a strong orthodox work ethic; her aversion to disorder and need for sanctuary bordered on missionary fervour. She provided both frame and engine for our family's fortunes. 'So, what are we going to do about Kairo's education then?'

My father studied the photograph of Che Guevara meeting our Governor-General in his journal: one bearded, the other bald. The Cuban Missile Crisis was over. 'The boy can read, no?' And so, they left me to another day of aimless browsing and drove off to work. My father to the Labour Department where he held the position of an amiable senior executive officer and had the dispensation to come home for lunch, and a nap, before going back to the office to analyse columns of fictitious numbers, as he said, while waiting for a peon to appear with the highpoint of his afternoon: a cup of sweet, milky tea from a tin pot. My mother to Radio Ceylon from where, revelling in the buzz of national broadcasting, she hardly ever returned home to eat.

I finished my Zane Grey and spent the rest of the morning using stolen chalk to connect the random parallel lines and sunray motifs on the back wall of our mishmash of a house.

At lunchtime, emboldened by friendship, I decided to extract some information from my father to impress Jay and cement our alliance; one thing I'd picked up from my father's ramblings was the importance of firm alliances.

'You know where bats come from, Thaththa?' I asked as my father steadily chomped, eyes half-closed, in the final stages of the meal.

'England.' He splintered a curried drumstick with his teeth, revealing a dark vein of marrow which he then proceeded to suck with severe concentration and a whistling sound. 'English willow trees.' He shifted an eye and studied me.' You want to play cricket?'

Unaware that we were talking at cross-purposes, I recalled a National Geographic article that recorded the journeys of the tiniest birds – swallows, wagtails – flying thousands of miles, crossing oceans and continents in seasonal migrations.

'Actually, bats don't have to be English,' he added. 'There wouldn't be enough trees for all of us from the West Indies to Australia if that was the case. India alone has enough cricketers to denude all the shires of England.'

'No, Thaththa. Not cricket bats. I mean bats like flying foxes.'

'Oh.' He bent his leathery head sideways to catch the sound the chicken bones made as he crunched them.

I gave up and curled up with a second-hand Rawhide Kid.

My father, marrow-drunk and drowsy, tried to discharge his duties paternal and political. 'Enough comics, son. Read Gorky or, if you must go American, Steinbeck. Improve your vocabulary and learn to understand the choice you have. This country is at a crossroads. No one knows which path will lead us out of the quagmire.'

Having made his point, he dug into his teeth with a toothpick. Once his teeth were clean, he called Siripala – who did the housework, the cooking and the driving, when he was not too busy smoking cheap cigarettes – with a single-word command: 'Take.' Succinctly meaning that the plates should be cleared. He always spoke in an abbreviated Sinhala to Siripala, as if he had to use a code to speak to a servant in a modern democracy. He stood up and rolled back his shoulders one at a time. 'Time for a quick kip.'

I drifted in and out of my comic book until Siripala had also surrendered to the afternoon's stupor. Then I took up my position on the balcony upstairs from where I could survey the road and plot the Wells Fargo route to Sacramento, dream of a life more exciting than one punctuated by my father's snores.

Across from the house, a large tract of wasteland – a jungle – fenced off with barbed wire, steamed in the afternoon sun, primed for my daydreams of cowboys and cougars.

In the buckskin map of my mind, a serene meadow of tepees and smoke signals began to form in the warm layered air when, across the road, the weekly paper collector, one of the many itinerant hawkers in our neighbourhood, turned the corner and made a beeline for our house. My father hoarded newspapers and my mother constantly tried to flush them away. Siripala would push piles of newspapers out or pull them back in according to who happened to be presiding in the house on the day. Today, the man was early.

Because of the yard-round basket he carried on his head, he could not see me but I crouched low anyway, making the intruder into a gunman with a sombrero and turning his reddish sarong into chaparajos. An unwitting desperado, he lifted the iron hasp of the gate and clanged it, clearly not understanding the risk.

Siripala hurried out, barefoot, shushing to silence him. He pointed to his wrist. The paper collector checked his wrist too. Neither had watches but both pretended their lives blossomed richer than they did. The man patted his headgear and drifted downstream; Siripala retreated.

The realm of make-believe, I could see even then, was not mine alone.

(Excerpted from Suncatcher by Romesh Gunesekara with permission via Bloomsbury India)

Also read: How to read a novel, a poem and a judgment: Yes, we need to learn the art of reading all over again