I shudder to think if I could write an analysis branding Keralites or Bengalis for being sexual perverts or horror-film characters respectively. Would a society or community tolerate such commentary?

In 2010, Mr Shekhar Gupta, during his election tour of Bihar assembly polls, had given a pen-picture of the wall-writing in remote villages of districts like Bhagalpur and Banka which were full of advertisements of Rupa, Lux Cozy, Amul Macho underwear. Mr Gupta’s argument was wearing branded underthings was a sure-shot indication of rising consumerism in the people which meant more purchasing power. Again, in the general elections of 2014, he visited Bihar and chronicled ‘general stores’ in far-flung towns selling not only bangles and bindis, but also sanitary pads and yes, babies' diapers. Perhaps I remember both these years’ old columns vividly because they pertain to districts where my roots lie. Or perhaps because we had heated debates among friends on this manner of depicting the ‘aspirational Bihari’. Or perhaps because Mr Gupta is among the few editors who write so profusely. Some editors, of course, don’t write at all.

But the larger point really is that Bihar, Bihari politics and Bihari society have puzzled observers like no other state. It baffles them that with social indices and educational indicators being what they are, Biharis do not fit into any of their ‘established conclusions’. The state has always led the more developed and ‘progressive’ ones in changing the political direction of the country. If it has shown caste and identity politics of an extreme nature, it has also been at the forefront of defying these identities and standing up for political ideas which changed the course of things. No wonder one finds workers (and active ones at that) of all political hues such as socialists, communists, Maoists and all shades of right-wingers here. Only in Bihar, do you find all of these in the remotest villages, and not just in some clubs and campuses. 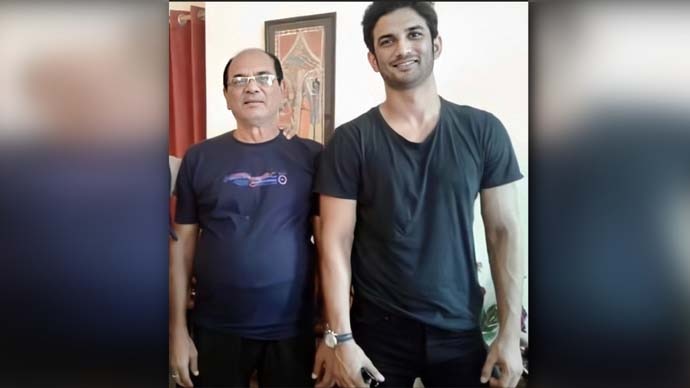 KK Singh (L) and his family members have claimed that they have enough reasons to suspect actress Rhea Chakraborty has something to do with the tragic end of Sushant Singh Rajput (R). (Photo: Twitter/ @Team_SushantSR)

Socially, Biharis, like so many others, have also been grappling with the broken family syndrome as recent generations moved out for bread-and-butter reasons as also to ‘prove themselves’. While migration for work among Biharis had started in the British era itself, it became a reality of almost every household in the recent decades as economic opportunities kept drying up, both for the educated middle class as well as the poor working classes. Yet, no matter where the location, the common Bihari remains rooted to the ‘home’. Her city-dwelling may be plush or humble, but it is invariably called the ‘dera’, a ‘shelter for the time being’.

In all this struggle, the Bihari has faced the humiliation of all kinds, yours truly included, for no other reason but just being a ‘Bihari’. But that’s a debate for another day. For last 48 hours or more, there has been much hash-tagging and WhatsApp-chatting about a PoV column on the ‘toxic environment and the mindset in Bihari families’ following the filing of FIR by the devastated father of the late Sushant Singh Rajput. KK Singh and his family members have claimed that they have enough reasons to suspect actress Rhea Chakraborty has something to do with the tragic end of Rajput. This may or may not be proven in the end. Whether guilty or innocent, Chakraborty’s case would be decided by investigative agencies and the legal process. As for the ills of patriarchy and prejudice against big-city women, I do not think any Indian society can boast to be free of that. And I write this after having closely observed societies in at least ten states in the course of my life. These are challenges we must fight together.

A broken father has voiced his suspicions and sought legal recourse. It must be read as such. And that’s it. To try to ‘intellectualise’ the case into a social theory by making sweeping comments on the Bihari community and condemn the same by smartly bypassing the ‘actual’ questions in the case is taking journalistic liberty to its nadir. I have read some cases from Kerala of sexual perversions beyond my worst imagination. I have also read equally horrific news breaks from the Bhadralok city —  Kolkata — where highly educated people kept living with the corpses of their family members till the stench couldn’t be tolerated by the neighbours. I shudder to think if I could write an analysis branding Keralites or Bengalis for being sexual perverts or horror-film characters respectively. Would a society or community tolerate such commentary? Would I be forgiven for writing such ‘intellectual’ takes? Most important, would I be able to forgive myself for misusing my journalistic liberty to write such stuff?

For at least two decades, I have read most of what Mr Shekhar Gupta has written. One may agree completely or partially with him, one may even disagree with every word, but he writes after scouring the heat and the dust on the ground. The same should apply to those who are published in his leadership.

Also Read | You don't look like a Bihari: Validating my identity in 2020

#Prejudice, #Stereotyping, #Bihari identity, #Sushantsinghrajput
The views and opinions expressed in this article are those of the authors and do not necessarily reflect the official policy or position of DailyO.in or the India Today Group. The writers are solely responsible for any claims arising out of the contents of this article.

The author is a journalist and Advisor, Prasar Bharati.