Those who espouse the cause of cleanliness ensure that their faces are plastered across every available inch of space.

Reality is just a blink away but blink so it might be real again.

Like every year as the hallowed date of October 2 approaches, the vibrational calisthenics of repeating slogans ad nauseam reverberates across media and promotional channels. The din of propaganda making liars out of otherwise honest people. And more disgustingly, it makes those who are sly, revel in the opportunities of their immoral advantage. The creation of a delusional narrative is important, how else would a sense of achievement be sold at every soiled turn and every dirty corner of what could be the mounting of despondency? As an aphrodisiacal substitute neutered India is repeatedly told and India is led by the nose to believe that with every passing year Bharat is becoming a cleaner place.

Dare someone blink it all away

For three years now the Swachhata Mission of the Modi Sarkar has been on in full steam. Flowing with the tide, dignitaries, big and small, from the local school master to the master who leads the country, are regularly seen, mostly around the period leading up to October 2, broom in hand sweeping away the refuse of missed garbage. The camera work, camera being a prerequisite for such important occasions, is without blemish, nary a focus gone wrong nor an obstruction blocking the honorary sweeper's intensity of expression. Millions of rupees and oodles of creativity have kept the Swachh Bharat Mission alive.

Blink but clean thy cuticle first

There is a village… there are villages where people are being fined for defecating in the open. A newspaper reported about a Rs 75,000 fine imposed on one family, does one need any more resolute proof that Swachh Bharat is being forcefully turned into a reality? What are the options - those who do not agree may please move to more salubrious climes in neighbouring countries where obviously cleanliness is not even a national priority.

Blink and your wish may be granted 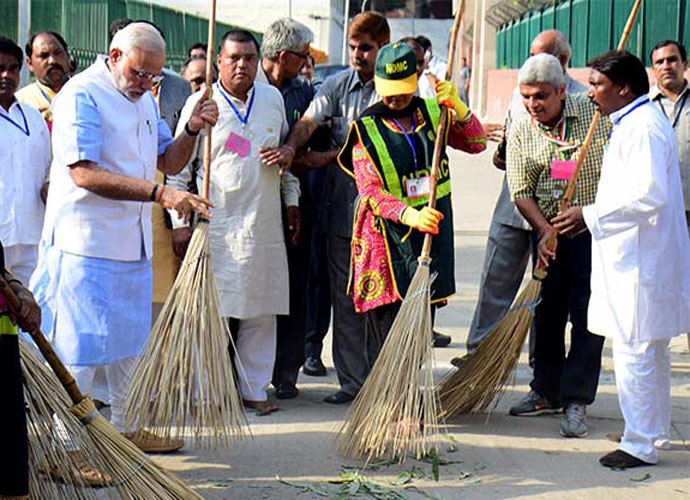 The festive season has begun in right earnest, a little earlier this year than normal but now have begun days, weeks and months of religiosity or to be precise - an explosion of decibel-cracking devotion; a gut expanding gorging of delicacies; an eye-popping imagery of neon exuberance; ear-bursting cracking of crackers and the debilitating debris of its ritualistic fervour. Take a walk early the next day to behold the continuity of a clean India spill out of the dustbins, susurrate in the heaped garbage, stink in the sulphurous fumes of relieved bladders and slip on human faeces innocuously abandoned along park walls and under-construction buildings.

The politics of cleanliness is a very powerful force. It justifies the irrational mathematics of 70 years of inaction leading up to a glorious and assertive exploitation of opportunity. For once there is momentum; for once after Gandhi someone has dared to put cleanliness next to Godliness. God is again paramount as is the clean garbage dump.

Beginning about a century ago, Gandhi started cleaning toilets - first, to send across the message that cleaning one's own shit is desirable and second, possibly more importantly, to challenge the inhibitions within to clean up after somebody else. It was the mark of his greatness that nothing was too small for him to dirty his hands with and yet Gandhi did not need to bombard his clean image for future generations to notice his greatness. Today, those who fly the banner of cleanliness must ensure that their faces are plastered across every available inch of space because the messenger now happens to be more important than the message. So blink India… blink…

Also read: Feeble no is still not a yes. Court ruling will hurt Indian women

#Clean India, #Mahatma Gandhi, #October 2, #Swachh Bharat
The views and opinions expressed in this article are those of the authors and do not necessarily reflect the official policy or position of DailyO.in or the India Today Group. The writers are solely responsible for any claims arising out of the contents of this article.