The Hindu Mahasabha leader's rampant misogyny was duly exposed by a panel of women public figures on India Today's Newsroom.

Exactly as Bollywood actors and celebrities from across the social spectrum are coming out with no-holds-barred condemnation of the prevalent sexism in India, we have a few netas and specimens like Swami Omji Maharaj of the Hindu Mahasabha saying that it's the clothes that women wear that lead to sexual violence.

Swami Omji, whose latest claim to fame is a high-profile eviction from the Bigg Boss house, on the disgusting charge of "throwing pee on the opponents" during the much-hyped reality TV show, was on India Today TV, when he said that women are "kaamini", or the ones who induce sexual desire, and therefore must be guarded in what they wear and how they conduct themselves in public spaces. 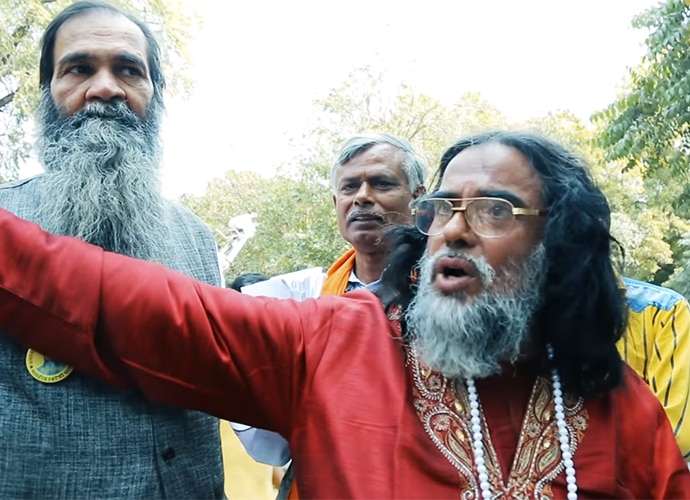 In a red hot panel on Newsroom, anchored by India Today's Rahul Kanwal, Swami'ji faced off established, independent women, such as Supreme Court lawyer Karuna Nundy, BJP's Nupur Sharma and writer Advaita Kala, who tore into the Hindu Mahasabha leader's bastion of sexism and exposed him, once again, as an odious man with an extremely demented mindset.

While the women cited the Constitution, law of the land and the gender equality that's needed in the 21st century in their bid to prove that women must be respected as individuals, as equal citizens of the country, and not as mere mothers, wives or sisters and daughters of men, Swamiji cut an obnoxious figure who kept harping on medieval practices and a mindset that continued to see women as mere sexual commodities.

The face-off reached epic proportions as the self-proclaimed Swami was roasted on live television, even as he kept saying that he worshipped women as divine beings, as required by "good Indian culture".

To the extent that the Swamiji even said that women in burqa are safer because they are fully-clothed and covered! And to think that Swamiji is part of the Hindu Mahasabha, an outfit that's known for its rabid Islamophobia and anti-Muslim bigotry.

Swamiji even went on to the extent of condemning the very idea of celebrating the new year's eve as a western export and not part of Indian culture: therefore indicating that the victims of mass molestation in Bangalore were to be blamed for the sexual assault they faced on December 31 night.

The self-styled godman's nauseating behaviour puts him at par with SP leader Abu Azmi, who compared women to sugar syrup and men to ants, and one notch higher than Karnataka home minister G Parameshwara, who too said that short dresses that the women wear are responsible for sexual assaults.