DailyOh! Why Imran Khan is a Covidiot, to when Daniel Pearl's killer said he was Pranab Mukherjee

Imran Khan walks all the way with the Covidiot crown.

You may or may not have heard Prime Minister Narendra Modi this morning, but by now, we are sure you know what he has asked Indians to do at 9 pm on April 5.

A video messsage to my fellow Indians. https://t.co/rcS97tTFrH

Yes, he wants us to come out in our balconies or doors with candles, diyas or torches, even your mobile flashlights will do, and keep them alight for nine minutes. But before you step out into your balconies and rush to your doors, please switch off all lights inside your house. That’s Diwali six months early? You can treat it whichever way you like, just don’t start bursting crackers.

He didn’t specify that. But we are specifying that because with some people, you never know. Like you do not know with Imran Khan. We have no clue how the Pakistani Prime Minister is dealing with the coronavirus outbreak in his country. We hope he has a clue. Though we doubt that strongly. Khan has said he will not impose a total countrywide lockdown to fight the disease because “total lockdown would create ‘unrest’ like the one being witnessed in a neighbouring country”. The neighbouring country Khan referred to is India. A comparison of numbers will prove how wrong Khan is. 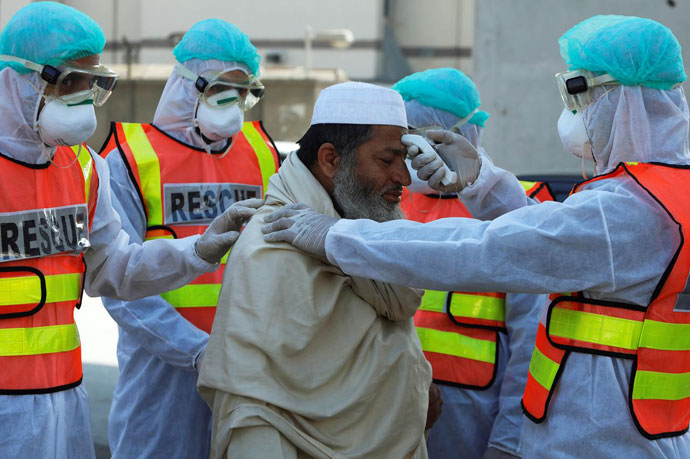 More than 2,400 people have tested positive for coronavirus in Pakistan. (Photo: Reuters)

Pakistan currently has more than 2,400 confirmed cases and over 34 people have died due to the virus. Now, Pakistan has a population of 19.7 crore while, India has 133.92 crore people. India has 2,183 cases and about 52 deaths. No, we are not in some competition with Pakistan on this. This is just to draw home the point that Imran Khan is acting stupid by taking a dig at India at a time like this instead of focusing on saving people in his own country, Pakistan. After all, he is the Prime Minister of the country. He sure makes the cut to qualify as our Covidiot Of The Day.

He sent a delegation of ministers to China when the world was imposing restrictions on travel to and from China. Why did he send them? For aid. Why couldn’t he just do it over phone is a question that we can’t answer. So, the delegation, which included Foreign Minister Shah Mahmood Qureshi, came back and went into a phase of self-quarantine. Thankfully, no one from the delegation is reported to have the disease so far. We wish them well.

But the people of Pakistan are angry. Now, people do remain angry with their governments in general but people in Pakistan are very angry – and rightly so. The country took no steps to halt the spread of coronavirus till it had already spread far and wide.

Early in March, some 250,000 men from Pakistan and foreign countries gathered at Raiwind near Lahore for a five-day meeting of the Tablighi Jamaat. Yes, the same organisation that is being blamed for the sudden spike in cases in India. Some figures suggest in India, Tablighi Jamaat members constitute for about 45 per cent positive cases.

Six of these Tablighi Jamaat members who were admitted in Uttar Pradesh’s Ghaziabad hospital were reported to be roaming around partially nude and spitting around.

Horrible. CMO Ghaziabad has written to @Uppolice complaining that the #TabligiJamaat men in the hospital are roaming around partially nude (without trousers), making vulgar signs, listening to inappropriate music & demanding cigarettes which is making work for nurses difficult.????‍♂️ pic.twitter.com/8Odr7PXyX5

A case has been registered against them. We hope the authorities take the strictest possible action against all people putting public health and life at risk. India is tracking down all people who attended the congregation in Nizamuddin and people who might have come in contact with these men.

India is not the only country trying to track down Tablighi Jamaat members. Pakistan is also busy tracing them.

Pakistani authorities are trying to track down 41,000 Tableeghi Jamaat members who gathered in Raiwind last month.8000 Tableeghis are quarantined in Punjab only. Govt didn't have the foresight to shut this down, now they've spread across the country. https://t.co/k3sPJ5XAL8

It is beyond understating why these men are not coming out on their own.

As the authorities deal with these miscreants, let’s move to some other coronavirus-related developments.

The World Bank has okayed giving US$ 1 billion (about Rs 760,00,00,00,000) aid to India to fight the new virus. The money will address the needs of infected people, at-risk populations, health personnel and other service providers. It will also help enhance medical and testing facilities.

Have you ever wondered what is the difference between World Bank and International Monetary Fund (IMF)? We often hear that so and so country approached IMF for aid or so and so was helped by the World Bank. So, if both are doing the same job, why have two?

The fundamental difference is that the World Bank is primarily a development institution while, the IMF is a cooperative institution and seeks to maintain an orderly system of payments and receipts between nations.

The World Bank primarily gives money to countries for development activities. The Bank's first loans were given out to fund the reconstruction of the war-ravaged economies of western Europe.

The IMF, on the other hand, was formed to resolve the problems that brought in the Great Depression of 1930s. Any country that is a member of the IMF must be ready to give up some amount of sovereignty by giving up economic practices that maybe harming other nations.

IMF’s primary job is to oversee the monetary and exchange rate policies of its member states and act as a guardian of the code of conduct.

So, how do these organisations make money? Every member state makes a contribution depending upon what its economy allows it to contribute. Also, they make money like other banks make money. Interest on loans and sale of bonds kind of activities. Both are also accused of being biased towards nations that contribute more. World Bank, in particular, is often targeted for giving money for building dams that displace thousands of people in developing countries. You see, every problem has a solution and every solution its own problems.

Now, we began by talking about Pakistan’s handling of coronavirus. Let’s go back to Pakistan to talk about its handling of terrorism.

Pakistan has commuted the death sentence given to terrorist Omar Sheikh to seven years. Since Sheikh has already been in jail for about 18 years, he is now set to walk free in Pakistan. Oh, but we didn’t tell you what Sheikh did. 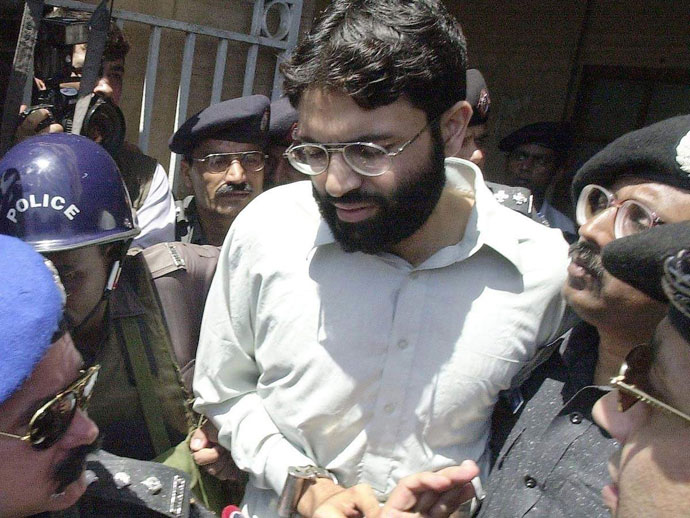 Omar Sheikh kidnapped and killed The Wall Street Journal journalist Daniel Pearl in 2002. Pearl was then the South Asia bureau chief for the organisation.

Of course, Sheikh wasn’t alone in executing the plan. The kidnappers demanded that all Pakistani terrorists who were lodged in Guantanamo Bay prison be released in exchange for Daniel Pearl.

The video of Pearl’s beheading was sent to the US consulate in Karachi. His severed body was recovered later. 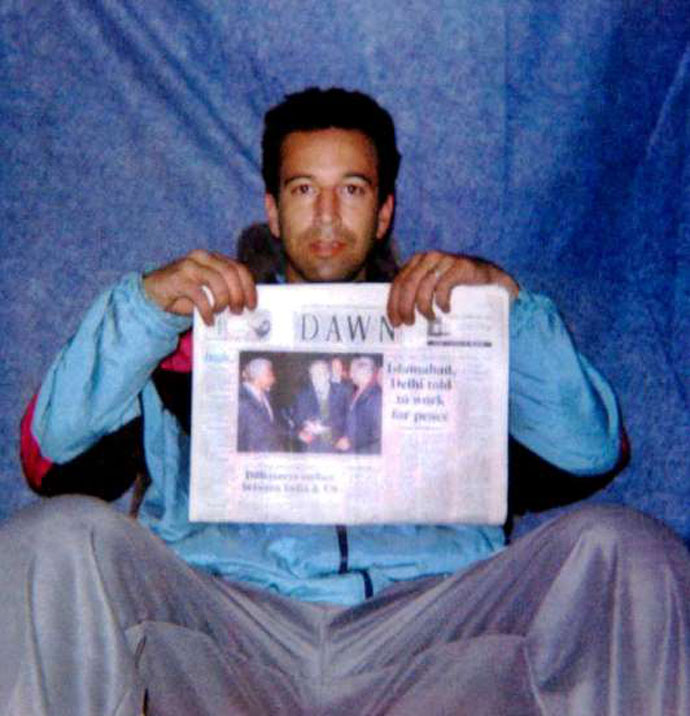 Daniel Pearl was killed by Omar Sheikh and his associates. (Photo: Twitter)

Sheikh is the same man India arrested in 1994 in connection with kidnapping of four foreigners - three British and an American from Delhi. He was lodged in the Tihar Jail till 1999, when he was released in exchange of those onboard the hijacked Air India flight from Kathmandu to New Delhi. Three other terrorists were released as part of the exchange.

Sheikh was born and brought up in London for most part of his life.

He is the same man who made hoax calls to former Pakistan President Asif Ali Zardari, impersonating India's former external affairs minister Pranab Mukherjee in a bid to increase the tension between India and Pakistan.

He first tried to make a call to Pranab Mukherjee pretending to be Asif Ali Zardari but the Indian side grew suspicious because he did not follow the normal procedure that is followed when calls are made between high-ranking people across countries. But the Pakistani side wasn’t smart enough. Pakistanis went claiming Pranab Mukherjee has threatened Pakistan.

Now, we know you would be laughing at that; we laughed as well, but what Pakistan has done by releasing the man is not funny.

Both India and the US need to talk very tough with Pakistan on this. India and Pakistan are not talking (at the heads of state level) but some back channel talks are always on.

Let’s now dwell for a bit on the word cooperate because cooperate is Our Word Of The Day.

According to the Oxford dictionary, to cooperate is “to work together with somebody else in order to achieve something”.

So, let’s work together to defeat the coronavirus. How do you that? Stay home. Practice social distancing. At home, if you are staying with others, help with everything that needs to be done to keep life going.

Listen to these birds chirp the message of cooperation to all of us.

With that, we will take your leave for the day. Have a good work-from-home-free weekend.

Also read: DailyOh! Should you wear (or not wear) masks?