Taliban regime in Afghanistan has now stopped issuing driving license to women. This adds on to the string of bizarre restrictions the Islamic group has imposed on women in the country.

After the Taliban took power in August 2021, Afghans were plunged even deeper into poverty and starvation. Over 3.5 million people are displaced by the conflict and 23 million people facing extreme hunger. 55 per cent of the Afghan population is without enough to eat and 9 million on the brink of famine, reported the UNHCR.

But, for Taliban, the issue doesn’t warrant a concern as they first need to 'control' their women.  In a latest restriction, Taliban has stopped issuing driving license to women, news agency ANI reported citing Afghan media reports.

Before this, women were seen driving cars in major cities like Kabul.

From restraining their movements to stopping single woman from boarding flights, Taliban has heaped several unjustified restrictions on women.

1. A DRESS CODE IN OFFICES The first restriction put by Taliban on women was the imposition of Abaya, a clothing that covers most of their body including the face. Women were also instructed to wear gloves to cover their hands. The order was issued on September 5, 2021, nearly six days after American forces withdrew completely from Afghanistan on August 31, 2021.

In November 2021, Taliban officials issued orders for women not to appear in television dramas and shows. Female journalists were also asked to wear headscarves and cover their hair. The official order had eight new rules which included banning of films that promote foreign cultural values. On March 28, 2022, Taliban ordered the Afghanistan Airlines to stop women from boarding flights unless they are accompanied by a male relative. Though Taliban denied this initially, a letter which was obtained by AFP, confirmed the restriction.

The letter read, “No women are allowed to fly on any domestic or international flights without male relatives.” Two travel agents, AFP contacted also confirmed that they had stopped issuing tickets to solo woman travellers.

As per new rules, women can visit parks only on three days a week - Sunday, Monday and Tuesday. While men will visit the parks on the other four days. The order was from the Ministry of Promotion of Virtue and Prevention of Vice on March 28, 2022.

According to the Taliban, women in Afghanistan will not be allowed on log-distance road trips unless they are accompanied by a male relative. This was also promoted in December 2021 by none other than Ministry for the Promotion of Virtue and Prevention of Vice.

The order also stated that vehicle owners should refuse rides to women not wearing headscarves.

6. NO SCHOOLS FOR GIRLS 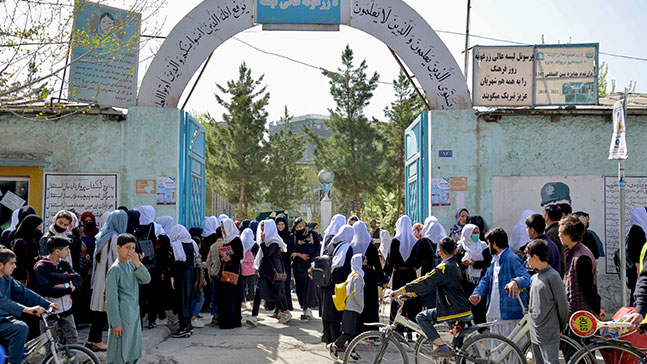 The biggest blow came on March 23. Despite the assurances only days earlier that schools would reopen for girls above sixth grade, on the first day of the school year in Afghanistan, eager female students arriving for class found closed gates and armed Taliban guards.

The reason attributed it to was the lack of women teachers in institutions.

Women in Afghanistan are not allowed to work in a workplace with males. This order was issued by the Taliban within one month of coming to power.  In September 2021, Taliban had ordered the ban in Kabul where almost 27% of workforce is women.

#Talibanregime, #Talibaninafghanistan
The views and opinions expressed in this article are those of the authors and do not necessarily reflect the official policy or position of DailyO.in or the India Today Group. The writers are solely responsible for any claims arising out of the contents of this article.