Taliban makes u-turn on reopening schools for girls, asks them to return home

Did you cry and crib when you had to go to school? In other parts of the world, like Afghanistan, girls cried out their hearts after being asked to go back from school. 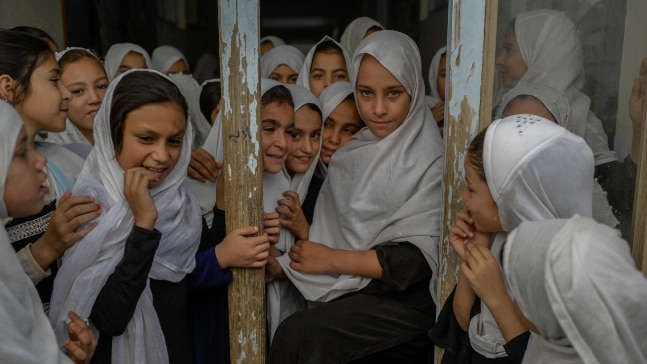 March 23, 2022, schools for girls reopened in the Taliban-ruled Afghanistan. It was announced almost a week ago that secondary schools for older girls (above grade 6) were also reopening. There was cheer and joy among millions of girl children in the country. Thousands put on their uniforms and set off for their neighbourhood schools in gusto.

Ministry of Education, IEA: All schools will restart on 23rd March 2022. pic.twitter.com/ivZt9YEYxN

But when they reached the gates of the schools, they were asked to return home. Some were in class when they were told the bad news.

First, the girls were reluctant to leave, then there was confusion and then came heartbreak. Many asked if it was a crime to be a girl.

“We just want to go to #school” says a young girl with tearful eyes after #Taliban reversed their decision to open secondary schools to girls.“Is being a girl a sin?” she asks; a question that should make our heads hang in shame!pic.twitter.com/GTMnOHaHrP

Human rights and especially women's rights mean nothing to the Taliban, it is known worldwide. In the 1990s, during Taliban's first rule in Afghanistan, girls were banned from schools altogether. Now, in their second stint, when the extremist religious outfit announced that it is finally opening up secondary schools for girl children, there was the hope of some progress. But that hope died a painful death once again when the Afghan girls were told to go back and secondary schools for the girls closed just hours after opening.

#UPDATE Taliban orders secondary girls schools in Afghanistan to shut just hours after they reopened, an official confirms, sparking confusion.An @AFP team was filming at Zarghona High School in Kabul when a teacher entered and ordered everyone to go home pic.twitter.com/8JeLAYvTkP

It has been nearly 187 days since the Taliban banned girls from secondary schools. In some places, schools remain open for boys and younger girls, but not for older girls. When the Taliban took to power in August 2021, the hardline government cited security and the Covid-19 situation to keep the schools closed.

According to some reports, the Taliban Education Ministry was reportedly overruled by the higher leadership. A spokesperson for the Taliban also reportedly said that the schools were asked to be closed again due to a ‘technical issue on deciding on the form of school uniform for girls’.

Heartbreak in Afghanistan today as girls turned away from high schools which Taliban had promised to reopen. Spokesperson says it is a ‘technical issue of deciding on form of school uniform for girls…’. No country on earth bans girls from high school

There were reports of isolated protests by girl students over the u-turn of policy.

Girls protesting after the Taliban locked them out of their schools, again. pic.twitter.com/im5zEi9rfo

The situation in Afghanistan for girls is more complicated than school closure. Limited job opportunities mean that their education and dreams don’t really get to take off in the country. Many educated women in Afghanistan are reportedly sitting at home without jobs due to the endless restrictions imposed on them. The Taliban only allows women to work in limited capacity as either nurse or as teachers. But even then many have not been paid for months now.

On the other hand, families are afraid to send their girl child outside due to the fear of the Taliban and harassment. Poverty and conflict have always hampered and continue to hamper the education of boys and girls in Afghanistan. It needs to be seen what the Taliban’s next move will be and how the international community reacts.