What is Tamil Veda?

Depending on who you ask, you will find one of three books identified as the Tamil Veda, locally known as Dravida Veda or Tamil Marai:

1) Thirukkural, a secular book of 1,330 ethical sayings, by Valluvar, which is over 2,000 years old and of probable Jain origin.

2) Thevaram, a Shaiva book of nearly 800 devotional songs, by Nayanars, which is also over 1,000 years old, that are sung in Shaiva shrines of South India, and given preference over Sanskrit Vedic hymns.

3) Divya Prabandham, a Vaishnava book of 4,000 devotional songs, by Alvars, which is over 1000 years old, that are sung in Vaishanva shrines of South India, and given preference over Sanskrit Vedic hymns.

Now for some history.

Vedic hymns were composed in the Indus plains about 4,000 years ago. They were organised in the Rig Veda and attached to rituals in Yajur Veda and to melodies in the Sama Veda in the Gangetic plains about 3,000 years ago. By around 2,500 years ago, the hermit (shramana) traditions such as Buddhism and Jainism challenged the ritualism of the householder traditions, and preferred Prakrit over Sanskrit. These hermits travelled South along with Vedic Brahmins.

Some theorise that these are the rishis that Rama encountered as he moved South towards Godavari; they told him about vanaras (monkey tribes) of Kishkinda which is modern Deccan plateau and rakshasas (demon tribes) who lived further South. But these are speculations.

The first epigraphic evidence of civilisations in the Indian subcontinent comes from the Ashokan edicts, 2,300 years ago, and Kharavela inscriptions, 2,100 years ago, that refer for the first time southern kingdoms of Cholas, Pandyas and Cheras. Archaeologists have found Tamil Brahmi script, and even cities, dated to this period in Tamil Nadu, and ports where we find Roman gold coins indicating a very thriving sea trade. Here was spoken a proto-Dravidian language, of which Tamil is the most prominent. Other languages that branched out from it were Telugu, Kannada, Tulu and Malayalam. 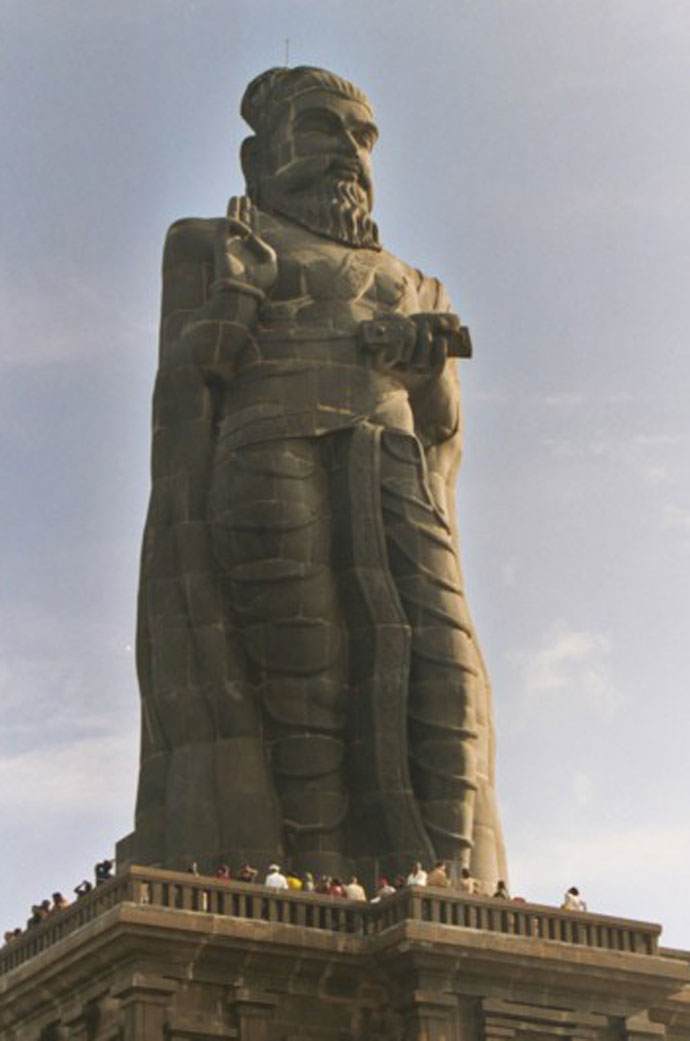 The statue of Valluvar in Kanyakumari. (Credit: Wikimedia Commons)

Over 2,000 years ago, roughly when Ramayana and Mahabharata and even Dharmasutras were being composed in North India, Tamil lands saw the composition of poems about love and longing (the inner or akam poetry) and about war (the outer or puram poetry). Many years after they were written, this body of literature came to be known as Sangam (assembly) songs. They reveal a familiarity with Vedic rituals as well as with Buddhism and Jainism, indicating that northern ideas have moved south 2,000 years ago.

About 1,500 years ago, Tamil poets were composing great epics such as Silappadikaram and Manimekalai. They reveal the popularity of Jainism and Buddhism in the region that today are Tamil Nadu, Andhra Pradesh, Kerala and Karnataka. These clearly overshadowed local Vedic Brahmins leading to much rivalry.

Veda carrying Brahmins had come to the South in waves. We know the earliest version of Sanskrit Mahabharata, written using Sharada script, reached Kerala via Brahmins who wore their top knots in front (purva-shikha). Later, Brahmins who wore their top knots behind (apara-shikha) carried another version of the Sanskrit Mahabharata which became the more voluminous manuscript in Grantha script. These Hindu epics came with ideas about Shiva and Vishnu that started mingling with Dravidian deities such as Murugan, the warlord who stands atop mountains, and Kotravai, the goddess of battle.

Then around 1,200 years ago came a man from Kerala called Adi Shankara, who travelled north via Omkara to Kashi, and then toured all over India doing something remarkable: he resurrected Vedic thinking by reframing it, using Puranic gods. He connected the old Vedic traditions (Nigama) to the later Puranic traditions (Agama) associated with pilgrimage, and worship of icons in temples. He challenged the intellectual traditions of the Buddhists and established the hermit-seer (acharya) tradition within Hinduism. He inspired many scholars to write Sanskrit commentaries on the nature of God based on the Upanishads and the Bhagavad Gita. 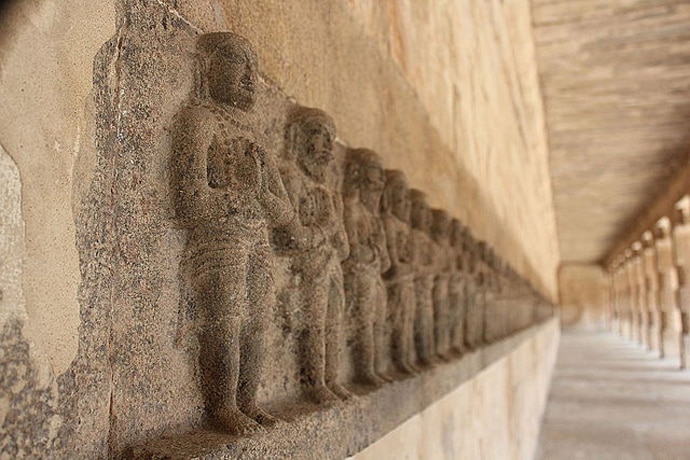 Around the same time, Brahmins like Nathamuni compiled the hymns of Alvar poets, and even composed a few. Later, acharyas like Ramanuja, renowned for his scholarship as well as administrative skills, who lived a 1,000 years ago, integrated the Vaishnava Tamil Veda (Divya Prabandham) with temple rituals in Shrirangam and other major Vaishnava temple complexes. Likewise, Nayanar poet-saints such as Sambandhar and Appar composed songs in praise of Shiva, challenging the ways of the Jains, the Buddhists and even the Vaishnavas. The Shaiva Tamil Veda (Thevaram, along with the larger canon Tirumurai ) was integrated with Shiva Siddhanta philosophy and temple rituals in Chidambaram and other Shaiva temple complexes. They found royal patronage with Pallava, Chola and Pandya kings. 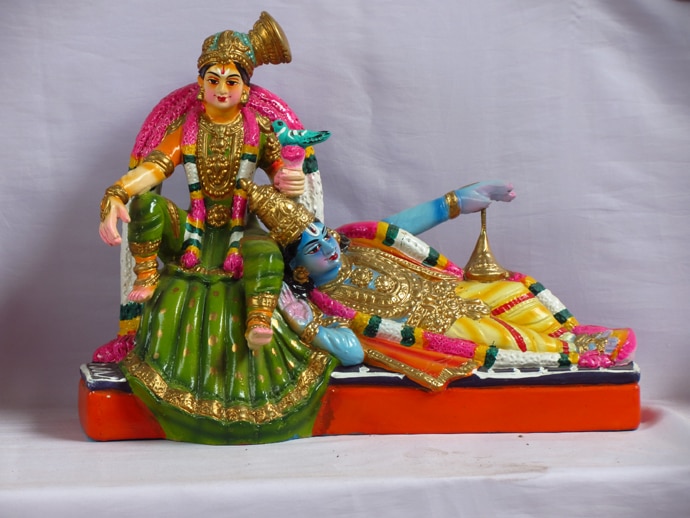 Lord Krishna with his head on the lap of the Alvar saint Andal. Photo: Wikimedia Commons

This period marks a revolution in Hinduism: at one level, the yagna rituals were completely side-lined by temple rituals, and at another level people were giving more importance to emotional relationship with God, over ritual connection via priests. It witnessed Kamban retelling the Ramayana in Tamil, which in turn inspired other poets to retell the Ramayana in their local tongue. And so we find regional Ramayanas gradually appearing in the South, the East and finally in the North and the West. Scholars now are convinced that the origin of passionate Bhakti and a personal relationship between devotee and deity, bypassing temples and Brahmins, originated in the South and spread to the North. We can say that the Tamil Veda marks the rise of the Bhakti movement of India about a 1,000 years ago.

In Tamil mythology, everything started much earlier, at the dawn of time. Shiva gave a discourse on the Veda and so all sages moved North; this caused the earth to tilt and so Shiva ordered his best student, Agastya, to move South. He came carrying northern mountains such as Palni on his shoulders and northern rivers such as Kaveri in his pot. He organised Tamil grammar. He passed it on to his student, son of Jamadagni, who wrote the Tolkappiyam, the earliest work on Tamil Grammar. About 1,200 years ago, around the time of Adi Shankara, a commentary on Tolkappiyam informs us about three grand assemblies of poet-saints organised by Pandyan kings and attended by gods, where Tamil poetry was presented thousands of years ago. Tsunami-like floods washed the coastal cities, where the first two assemblies took place, away. Recent archaeological digs suggest remains of the ancient Madurai, where the third assembly may have taken place, maybe 2,000 years ago. 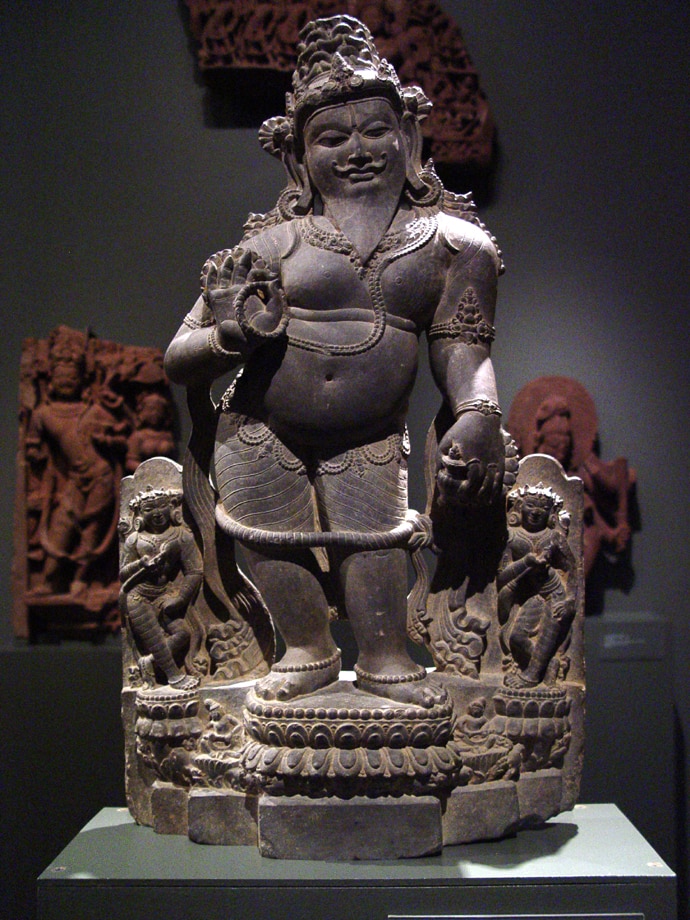 Shiva gave a discourse on the Veda and so all sages moved North; this caused the earth to tilt and so Shiva ordered his best student, Agastya, to move South. Photo: Wikimedia Commons

All this talk of grand Tamil cities with assembly of poet-sages, with trading links to South-East Asia and to Middle East, washed away in floods, has led to the theory that Dravidian language thrived in the Harappan civilisation, 5,000 years ago, before being displaced by Sanskrit-speaking Aryans. This thesis of Tamil being pushed away from the North is popular amongst many South Indians. By contrast, many North Indians believe that from the beginning of time, or at least since the last Ice Age, 12,000 years ago, across the Indian subcontinent, even in cities of Harappan civilisation, Sanskrit, the language of the gods, was spoken, and Tamil is just a branch of Sanskrit. Neither of these are scholarly claims; they are political and best left to politicians.

What we are certain of is that Tamil literature has a well-documented history of nearly 2,500 years. It gave us a secular Tamil Veda, Thirukkural, 2,000 years ago as it exchanged ideas with Vedic, Buddhist and Jain cultures. Then, about a thousand years ago, it gave us the Shaiva and Vaishnava Tamil Vedas of the Nayanar and Alvar poet-saints that erupted into the Bhakti way of thinking that transformed Hinduism forever.

Also read: How different are the Jain Ramayana and Jain Mahabharata from Hindu narrations?