DailyOh! What was missing in the Tanishq ad, to why iPhone is called iPhone

Tanishq boycotted its ad before people could boycott Tanishq - even if they couldn't afford it.

After calls to boycott Tanishq from some sections, Tanishq boycotted its own ad which showed the story of a Hindu woman, married into a Muslim family. The young woman’s old mother-in-law organises a godbharai - the Indian baby shower - for the woman who is pregnant. For some strange reason, the mother-in-law is seen taking the pregnant woman from room to room and then the garden. The garden is so beautifully decked up it is totally possible you miss the jewellery for the garden. You could have also missed the jewellery trying to digest the love with which the mother-in-law sees her daughter-in-law. Thank you for making us notice the beautiful #tanishq ad dear trolls ! pic.twitter.com/Wev3VSaiCw

But many missed the jewellery not for the love or the garden, but 'love jihad'. Then came the calls for boycotting Tanishq on (anti)social media. It is not possible to ascertain how many of those raising the call were planning to buy from Tanishq.

People, you see, aren’t buying big these days. Housing sales in the first three quarters of 2020 – January-March, April-June, July-September – have plunged as much as 62 per cent in the National Capital Region.

The economy is hit; so even those with money are wary of spending what they have. Congress, meanwhile, is fuming over losing what it had. The foundation plaque with Congress chief Sonia Gandhi’s name has gone missing from the Atal Tunnel. Yes, the same tunnel that PM Narendra Modi inaugurated on October 3. Congress says Sonia Gandhi’s name was on the plaque because she had laid the foundation of Atal Tunnel on June 28, 2010. The public may not care about who laid the foundation and who inaugurated a project. What goes my father, we say? The same doesn’t apply to Lahaul-Spiti Congress Chief Gyalchan Thakur because Sonia Gandhi is his leader, even if not the father. 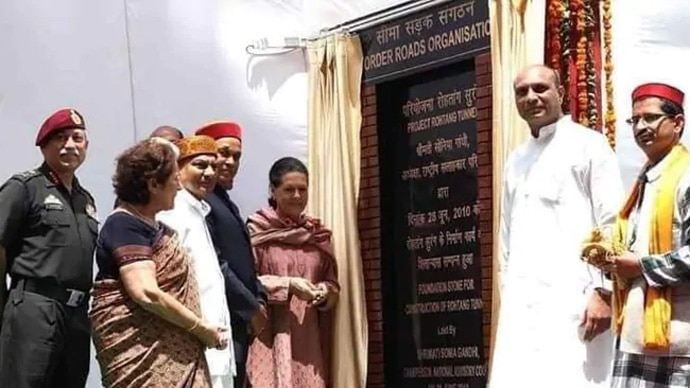 Thakur has lodged an FIR to find out where the plague is. The police may help Thakur find it. We will help you trace the meaning of the word plaque for no other reason than plaque being our Word Of The Day.

Plaque comes from French plakken, which means to stick. In the current sense, plaque is a flat, thin piece of metal or wood with writing on it that is used especially as a reminder of something (such as a historic event or an achievement). The stickers Ghajini stuck were just notes or reminders and not plaque because plaque will remind you over a long period of time. It is also used to define a thin coating that forms on teeth and contains bacteria because that too ‘sticks’ on the teeth.

With the Atal Tunnel named after Atal Bihari Vajpayee and the plaque now saying PM Modi inaugurated it, people may forget Sonia laid the foundation stone unless Thakur can trace the plaque and restore it. The other way is for Congress to return to power. Looks unlikely? Now, go look at the history of elections in India. Indian voters love to throw surprises.

US President Donald Trump currently wants to throw kisses. Not ordinary pecks, you see, but big fat slobbery kisses. That’s because he is feeling powerful having ‘defeated’ Covid. "I feel so powerful. I'll walk in there, I'll kiss everyone in that audience. I'll kiss the guys and the beautiful women, just give you a big fat kiss." Where was he planning to walk? To the crowds gathered in Florida for his rally.

If you call Trump stupid, what do you call a man, who believes a ‘chip’ made of cow dung can reduce radiation from mobile handsets and act as a safeguard against diseases? His parents named him Vallabhbhai Kathiria. He grew to become the chairman of Rashtriya Kamdhenu Aayog chairman. You can choose to call him what you will, but for documentation purposes, he remains Vallabhbhai Kathiria.

If it is thumbs down for Trump and Kathiria, it is thumbs up for Aarogya Setu app from World Health Organisation chief Tedros Adhanom Ghebreyesus, who has been met with thumbs down and boos because he helped (even if unwillingly) China turn an epidemic into a pandemic. The app, Tedros said, helped India identify coronavirus clusters and expand testing in those areas.

Tedros is an unapologetic chief but North Korean dictator Kim Jong-Un turned himself into a teary-eyed apologetic leader. There were so many teardrops, a few even oozed out of his eyes as he said sorry to citizens for failing to improve their lives. He didn't cry alone, of course; his troops cried along.

At a recent speech during celebrations to mark the 75th anniversary of the founding of the ruling Workers' Party, Kim thanked the troops for responding to devastating storms, and for helping to prevent a coronavirus outbreak in the country. He choked on his tears even as he was speaking. Dictators may or may not have hearts, but they have eyes and can use them to shed some of their emotions.

People, however, must not use their kidneys to buy iPhones. Apple is all set to take the wraps off the new iPhone 12 series later today. For Apple, October is the new September because Apple always launches its iPhones in September every year. But this year is not like every year. Do you know why iPhone is called iPhone, like a phone saying to you, “Hey you, I am a phone”? The iPhone gets its name because it can be customised to suit the user. Its screen and applications can be altered to individual taste, like iPod and iGoogle. They could have also called it myPhone but then that would have made it too confusing. Imagine you go to a shop and say 'I want myPhone'. And the person at the shop who has never known you is like, “How am I supposed to have your phone in the first place?”

Apple mulled over many names before it decided upon calling its smartphone 'iPhone'. The names under consideration were 'iPad', 'Telepod', 'Mobi' and 'Tripod'. But they zeroed in on iPhone because it ruled out the others.

No matter which phone you buy and use, please use it responsibly. We are not raising a moral argument, but a legal one. Kangana Ranaut has landed in trouble (some more) because of an irresponsible tweet. Karnataka Police has lodged an FIR against actor Kangana Ranaut over her tweet against farmers who were protesting against the controversial farm laws passed by the government. The police filed the FIR on the orders of a Karnataka court. 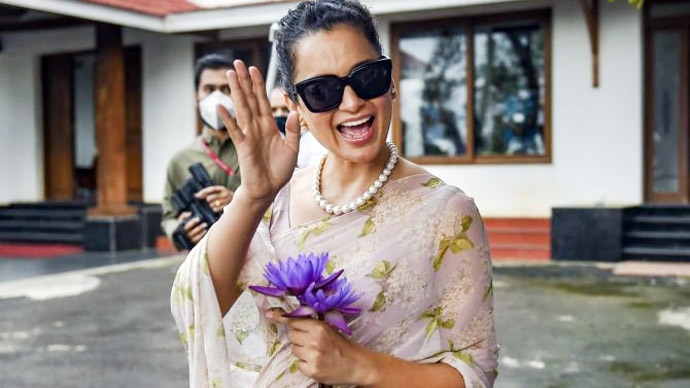 Karnataka Police has lodged an FIR against actor Kangana Ranaut over her tweet against farmers. (Photo: ANI)

If the court has acted stern on Kangana’s tweet, Maharashta Chief Minister Uddhav Thackeray has spoken sternly to Governor Bhagat Singh Koshyari on being questioned if he has turned secular. The conviction with which politicians speak of ideologies is so strong, we have a feeling, they must at times be leaving themselves confused.

In a conviction-filled and sarcasm-laden letter, Koshyari asked Uddhav, “I wonder if you are receiving any divine premonition to keep postponing the reopening of the places of worships time and again or have you suddenly turned secular?”

In his response Thackeray said, “I don't need a certificate from you about my Hindutva.”

There is no agency that issues certificates on secularism but all certified agencies on coronavirus can tell you congregating in public places in large numbers can help coronavirus find you before you find God.

So sit at home and ask God for what you want or just thank him for what you have. And if you don’t know how to kill time sitting at home, we recommend The Umbrella Academy. The US series is available on Netflix.

Also Read: Why Djokovic learnt his greatest lesson in his great French Open 2020 defeat against Nadal