From butter tea to latte, how Tawang is adapting to increasing tourism

The article has been co-authored by Sourina Bej and Nasima Khatoon.

Do you prefer Americano or latte? Lobsang Tenzin quickly picks up the large porcelain mug, and the coffee machine churns to pour out our lattes. The temperature outside Café Suburb has dipped to 2 degrees Celsius after a heavy downpour.

“I would have preferred butter tea, "local chai", you know? This traditional Monpa tea made out of churpi (yak cheese) warms you in this chill,” smiles Tenzin. But not all tourists prefer the sharp smelling protein rich beverage. Instead coffee is quickly becoming the flavour of the picturesque small district in western Arunachal Pradesh, Tawang.

Called the land of Monpas or Mon tribe bordering Bhutan in the west and China in the north, the border town of Tawang is now emerging as a major tourist destination of Northeast India. With it the Monpas fear a cultural erosion of their food habits and living.

“Drinking coffee is not our tradition,” Tenzin’s father turns from the billing counter and adds to our conversation. “We are adapting to packaged milk and Amul cheese slowly.” The Monpa cuisines are inherently dependent on yak products but with decrease in yak produces and more inflow of tin/packaged products with a simultaneous need to meet the tourists’ needs, the recent additions to the Monpa diet are striking. The tradition of Monastic education is also fading away slowly. [Credit: Reuters photo]

According to the livestock census of 2012, the yak population in India is estimated at 76,237, of which 14,000 are found in West Kameng and Tawang districts. “Yak husbandry has to be preserved as it’s the only source of income for many Monpa nomads hailing from Pangchen Valley in Zimithang and Lumpo circle of the district.”

Lham Tsering, the owner of Snow Hill, one of the authentic Monpa serving food restaurants in the Nehru Market of Tawang, credits the decrease in Arunachali yak products to two reasons: the huge tourist inflow and animal herders opting out of yak husbandry. The temperature increase has led to change in alpine pasturelands which serve as fodder to the Arunachali yaks. Yaks are migrating to higher altitudes thereby making it difficult for the herders to traverse and trace yaks in the high altitude terrain.

In addition, tourism has become one of the sought after profession of the Monpa youths of Tawang. Most of the Monpa youths are educated in the metro cities of Bangalore, Pune, or Delhi, and after completing their higher education many return to Tawang with a plan to start their own business/restaurants. 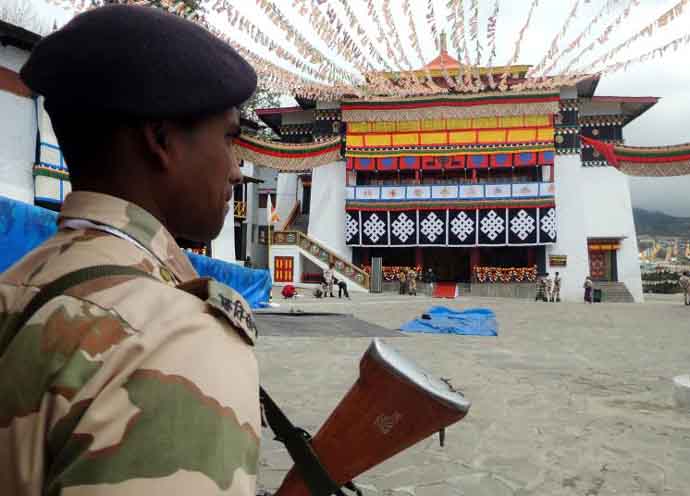 The tradition of Monastic education is also fading away slowly. Many Monpas leave their monastic life mid-way to become an entrepreneur and the monastic education helps them to grow better. “I liked hanging out at Café High Spirits of Pune during my college days,” says Tenzin, an engineer-turned-café owner. Café Suburb is not the High Spirits in Pune, but it surely has the high-spirited American pop music and cappuccinos to compliment.

Alterations to the food habits is not the only change the Monpas have to adapt to. The Monpas have a rich culture of their own, ranging from handicrafts weaving, shoe-making (Tsem-Lham), Shom (headgear made up of yak hair), Shuk (paper, also spelt as Shug) making to mask-making, carpet weaving and Thangka painting. But the handicrafts industry is slowly nearing death as most youths are disinterested to learn the skill and the time-consuming process to weave don’t always reap the desired monetary returns that a hotel business can in Tawang. 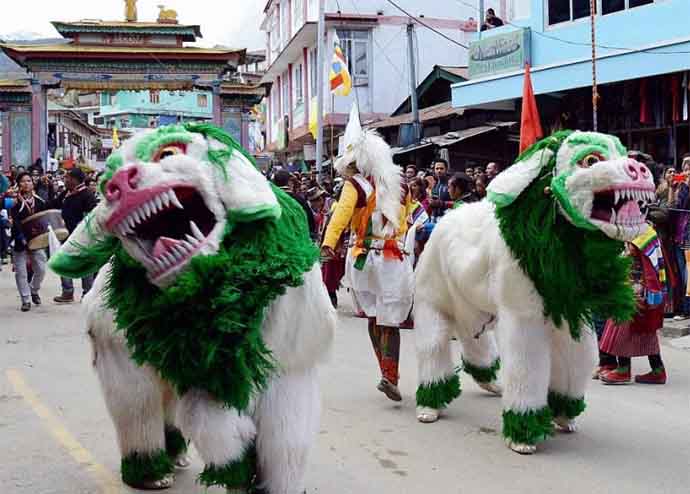 Thukten Thiki, a 70-year-old Monpa woman, living in Blething near India-Bhutan border is one of the very few alive with the knowledge to weave a complete Monpa dress. Sitting on her traditional loom on the porch of her small abode, Thiki starts weaving a cloth of yellow and red colour, especially offered to the monastery. “Only 15cm of cloth can be woven per day given the limited speed of the archaic handmade machine,” says Thiki adjusting her specs over her wrinkled nose. In this pace one complete dress of a Monpa, worn during Losar, Torgya and Snow Lion dance festivals, takes more than four months to finish and costs around Rs 7,000 to Rs 12,000. The Tso-Lham alone costs Rs 3,500.

Today, the local markets and souvenir shops of Tawang are flooded with less expensive Chinese and Bhutanese goods. With skewed prospects of formal border trade (with Bhutan and China) through Tawang, acquiring the raw material of the dress from Bhutan adds to the cost of the product.

The Tawang Handicraft Emporium under the government has attempted to preserve the local crafts. Classes on Thankha painting, mask making, carpet and cloth weaving are organised regularly but has drawn few interested participants.

Similar is the story of yet another unique tradition of Monpas: making of handmade "Shuk" (paper in Monpa language). Mukto, a village, south of the district, is the only place where the raw material, Daphne papyracea or "Shuk Sheng" is grown.

“These papers, used for printing religious texts, are of high quality and can withstand the rough climate for long time,” says Thiki. The cost of one sheet sold to local emporium and market is Rs 5 to Rs 6. Due to availability of cheaper and fine quality papers in market, this age-old craft is facing extinction. Even these few individuals make Shuk only during Losar, Torgya or big government programmes for exhibition.

According to district tourist officer (DTO), the number of tourist inflow is increasing every year. “Last year the number of domestic tourists in Tawang was around 44,000, which was almost twice of the previous year,” says the DTO. A number of initiatives like homestays, community-based tourism and eco-tourism have been initiated by the tourist department of Tawang indicating the government’s desire to promote Tawang as tourist hub of Arunachal Pradesh.

As we pour ourselves a cup of butter tea at the Snow Hill, the sun has set on yet another day in Tawang. A thought crosses our mind as a tourist sumo parks at the restaurant parking lot. May be Tawang will become another Gangtok. But will Monpas be able to sustain its culture from change? A question that has crossed many Monpa minds too.

(The article is based on a recent field visit to Tawang as part of a larger research study undertaken by the International Strategic and Security Studies Programme at NIAS.)

#Tourism, #Monpas, #Arunachal Pradesh, #Tawang
The views and opinions expressed in this article are those of the authors and do not necessarily reflect the official policy or position of DailyO.in or the India Today Group. The writers are solely responsible for any claims arising out of the contents of this article.