The Age of the Unicorns: How India’s tech start-ups have struck it rich

India Today Editor-in-Chief talks about the fascinating evolution of Indian start-ups and how they pulled off their meteoric rise, in the July 12, 2021 edition of the India Today Magazine.

Amid all the gloom and doom of the pandemic, here is a cover story to bring you some cheer. The Indian start-up universe has never been better. Last year, India added its largest number of start-ups, more than 1,600, at a rate of roughly four a day. IT industry body Nasscom rates India as the world’s third-largest tech start-up hub. Technology-driven, disruptive and privately-owned, these bold new enterprises are not just rewriting the traditional rules of business but also collapsing timelines. In 2005, it took an Indian start-up 15 years on average to break into the ‘unicorn’ club. By 2016, this time frame had shrunk to just 2.4 years. Privately-owned startups that cross $1 billion (Rs 7,430 crore) are called unicorns, named after the mythological horse-like creature with a horn on its forehead. The reference to the elusive, mythical beast captures the statistical rarity of their success. While many traditional companies have suffered severely in the Covid-19 pandemic since March 2020, India welcomed 23 unicorns into its start-up hall of fame, taking the total to 48, behind only the US (288) and China (133).

Nearly 21 per cent of India’s unicorns are in fintech, 19 per cent in software-assisted services, and 15 per cent are e-commerce firms. The combined valuation of these 48 unicorns is currently $139.7 billion (Rs 10.4 lakh crore) compared to the Rs 13.23 lakh crore market capitalisation of Reliance Industries, the company with the highest valuation in the Indian stock market. Except that the unicorns have created their value in less than a decade.

India embarked on this new tryst with destiny three decades ago when the government unshackled control over the economy. One of the goals of liberalisation was to unleash the animal spirits of our entrepreneurs. Since then, India’s GDP has grown from $270.5 billion in 1990 to $2.87 trillion in 2019. And the rise of the unicorns best captures India’s current entrepreneurial zeitgeist. 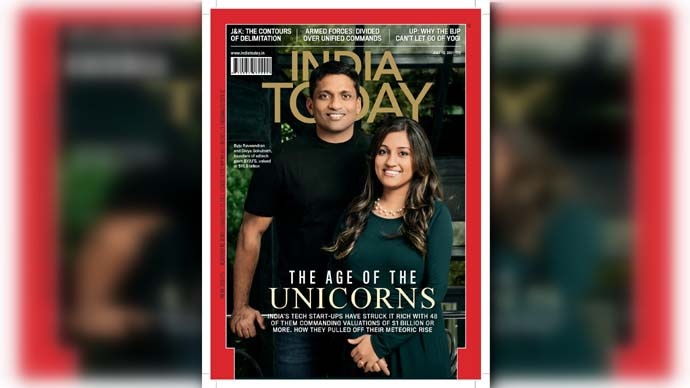 This is no accident. It is the maturing of a trend that began over a decade ago. A new generation of Indian start-ups, backed by angel investors, rose from the ashes of the great recession of 2008. They built their successes on the first wave of post-liberalisation entrepreneurs who powered India’s rise as a global IT and ITES hub. In 2015, for instance, 1,200 start-ups were launched in India. The rapidly changing digital environment in the country also propelled their rise. It is estimated that 43 per cent of the Indian population, or roughly 622 million people, are active internet users. Interestingly, while the urban internet users increased by 4 per cent year-on-year, growth in rural India was 13 per cent, highlighting the growth potential in digital services. Another sleeping-giant opportunity is the 100 million Jan Dhan account-holders introduced by the Modi government, who have been authenticated by Aadhaar. Sooner or later, they will be part of the digital economy. Digital payments are widespread. Mobile phone data, the cheapest in the world, has fuelled the digitisation of consumerism. The availability of cheap capital in the US has seen their venture capitalists investing in Indian start-ups. More recently, as multiple waves of the pandemic and lockdowns forced people indoors, they veered towards digital platforms to shop for essentials, order meals, and use e-commerce systems to pay for them.

India’s most valuable start-up, the Bengaluru-based edtech firm Byju’s, epitomises this phenomenon. Founded a decade ago by Byju Raveendran, 40, and his wife Divya Gokulnath, 34, the portal broke down subjects like science and mathematics into video lessons and used interactive tools to tap into India’s colossal education market. The firm is, in fact, a ‘decacorn’, or part of the $10 billion club, reaching a valuation of $16.5 billion (Rs 1.2 lakh crore) this June. This is equal to what the central government earned from custom duties last year. How the son of schoolteacher parents from a village in north Kerala came to build the world’s 11th most valuable start-up is clearly the stuff of business legend. And he’s not alone.

Our cover story ‘The Age of the Unicorns’, by Executive Editor M.G. Arun and Deputy Editor Shwweta Punj, describes the fascinating evolution of Indian start-ups.

As with all businesses, there is a flip side to this boom. Soaring valuations are a game of perception. The cash burn is massive and many domestic investors and financial advisors caution that the Indian start-up universe is a bubble. This has naturally fuelled concerns about the sustainability of these business models. For every unicorn, there are dozens of start-ups that have crashed and burned or turned into plough horses. Investors, however, continue to pump in money, hoping for a windfall. Once the poster child of India’s start-up boom, Flipkart has made consistent losses since its launch 14 years ago. Despite the boom in online classes during the pandemic, Byju’s has not met its target of $150 million profit in 2021-21 due to its high investments in marketing. Yet their investors keep the faith, saying it is a game of “last man standing” and of these start-ups being a “watering hole” where customers have no choice but to keep returning for services or products. However, what is most important is the “burn rate”, or how much loss investors are willing to bear before they bail out.

Yet, for all these associated risks, unicorns are essentially a good thing. They reflect what businesses should be. They have a big idea, pursue it doggedly and are agile in ways entrenched businesses may not be. They can also create jobs at a time when jobs are being lost everywhere. Consulting firm KPMG reckons the e-tail and allied ecosystem will create 1.45 million jobs this year in India, led by the logistics and warehousing sector. Start-ups also foster a culture of innovation and entrepreneurship. This, in turn, unleashes creative destruction in society, leading to progress. So, here’s to the unicorns. May their herd increase!