The BJP promoted the Anupam Kher-starrer The Accidental Prime Minister from its very own Twitter handle, officially endorsing a movie which apparently tries to show former PM Manmohan Singh as a weak PM, who got to occupy the highest seat, seemingly only to keep it warm for Congress president Rahul Gandhi. The movie released on January 11 – the same day as the Vicky Kaushal-starrer Uri: The Surgical Strike also hit the cinema halls.

So, when it came to choosing between the two movies showing, of course, in nearby theatres, veteran BJP leader LK Advani, now a member of the BJP's 'margdarshak mandal' and on that account, with ample time to watch movies presumably, opted for a theatre showing Uri.

He was spotted at an Uri show along with his daughter Pratibha Advani.

See who is in the theatre to watch Uri movie ???? pic.twitter.com/4W9rjQU7kE

So, why did the veteran leader choose to venture out and watch Uri over The Accidental Prime Minister?

There are five probable reasons for this choice:

1) Advani wanted to confirm that the surgical strikes happened?

The government of India claims between September 28 and 29, 2016, Indian troops crossed over into the Pakistani side of the border, launching an attack on terrorist infrastructure there. The strike was touted as India’s response to the attack by Pakistani terrorists on an Indian Army base in Uri earlier that month. Vicky Kaushal in a still from Uri, which is based on the surgical strike India launched against Pakistan in September 2016.

Supporters of the Indian government said the army's strikes had taught Pakistan a long-awaited lesson — but Islamabad dismissed the reports as an "illusion".

Not just the Pakistani government, many Indian politicians too insinuated the government was lying about the strikes.

It could be that Advani went to watch the film to ascertain if PM Modi’s claim over the strikes was indeed true. Given the reported lack of conversation between the two, it is unlikely that Advani could have straight away put that question to Modi. So, perhaps he went to watch the movie instead.

2) Maybe Advani no longer cares about accidental (or deliberate) PMs?

There is nothing that the BJP leader has not done to realise his dream of being India’s PM — but he couldn’t go beyond being deputy PM.

At 91, Advani knows that not even an accident of fate could likely get him the chair he always had his eyes on. So, why watch how someone else became PM – that too, a man from some other party. Learn something new maybe — like how to be an accidental President? 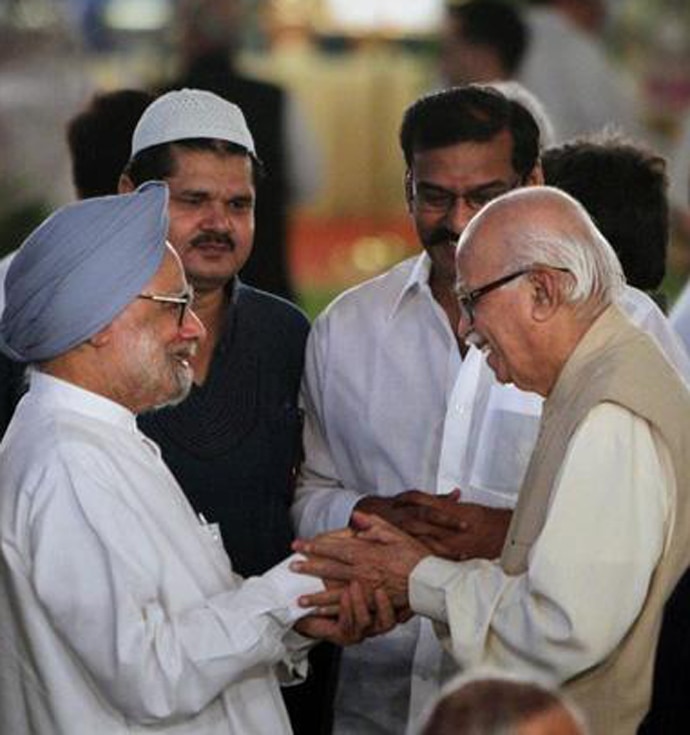 3) Advani is not active on Twitter — does he know the BJP endorsed the other movie?

Much of the bitter squabbling over The Accidental Prime Minister between the BJP and Congress happened on Twitter. While Advani is on Twitter, he hasn’t been too active beyond August 2016.

So, even if the BJP promoted the movie heavily on Twitter, how was Advani to know?

The former deputy PM is a voracious reader. He started reading while he was a teen and simply never stopped. It is likely Advani has read The Accidental Prime Minister: The Making and Unmaking of Manmohan Singh by Sanjaya Baru — on which the movie is based — when released in 2014.

Now, those how read know the movie is never as good as the book, so Advani could have well decided to give the film a miss.

5) How to dramatise Manmohan Singh?

Singh is a simple man, both in mind and mannerisms. With the same walk, the same expression, he could be happy, irritated, sad or angry. That doesn’t leave much room for someone to dramatise him — a must for any screen depiction.

Advani probably anticipated this and decided to watch Uri instead, given that it's both action and power-packed.

And it has Vicky Kaushal.