Beyond vanilla 'sex': Tinder introduces 23 genders to choose from

The move will at least lead to more conversation about different gender identities,

Tinder has given Indians a new reason to swipe right for it. On November 13, the dating app announced 23 gender categories, apart from ‘man’ and ‘woman’, for its users.

According to various reports, the new categories would include transgender, hijra, pangender, non-binary, trans-man, trans-woman, gender-questioning, intersex, among others.

Apart from boosting the inclusivity credentials of Tinder India, this step is important in several ways. An individual alone should get to decide where on the gender-sexuality specturm they wish to place themselves. (Photo: YouTube/screengrab)

The idea that gender is a spectrum is not a new one, but has not really become part of India’s popular culture yet. For many, ‘gender’ continues to mean men, women, and a vague, hardly-understood world of ‘hijras’ (or the term used to denote the community in India’s many languages).

The sex of a child, depending upon the biological organs it is born with, can be assigned at birth. Gender, however, is a social construct — society decides what clothes, hair, make-up, behavioural traits, jobs, roles are ‘more appropriate’ for a man or a woman.

For a lot of people, confirming to their ascribed gender comes naturally. Many, however, struggle with it. To what degree does a biological male wish to confirm to society’s definition of ‘man’, or a biological female to rules of woman-ness, or where they wish to place themselves on the gender and sexual spectrum, should be left to that individual alone.

For a concept to gain recognition — and then acceptance — it needs to become more than a concept: it needs to be a part of people’s lived reality. Tinder is popular among young people, and is therefore a great way to introduce them to new ideas.

Conversations around gender identity in India urgently need to move beyond “activist spaces” and feature in the mainstream, and for this, Tinder can be an important vehicle.

Giving people a list of 23 genders and asking them to choose one label for themselves can be seen as going against the idea of the individual deciding their own identity. To work around this, Tinder India gives users the option of typing in any word that describes their gender identity, using the “Edit Info” feature.

It also gives people the option of not declaring their gender at all. 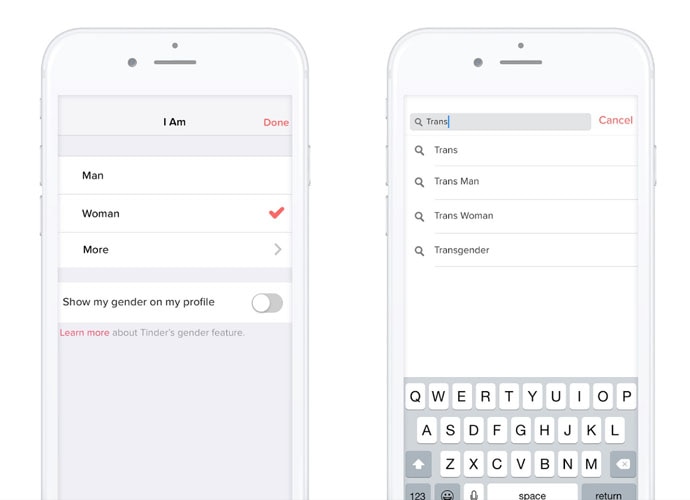 This step by Tinder is corrective action for flak it has faced in the past — so far, it provided users only two gender options, when India legally recognises three genders. Also, several users had their profiles suspended after others reported them over gender issues.

However, it seems willing to accept its mistakes. In a statement, the company has said: “We know that we haven’t been perfect in the past. If you believe you were ever wrongfully removed from Tinder because another user reported you unfairly due to your gender, we want to invite you back to our platform. Simply send an email to questions@gotinder.com with details about your account.”

In conservative Indian society, it remains to be seen how many people will actually choose to identify as minority genders on a dating app. But hopefully, more people will at least talk about and discuss these identities, bringing awareness and acceptance about them.

Sexuality and gender are fundamental to people’s identity. By not allowing them to choose who they are — or who they want to be — society condemns them to live a diminished existence, to a life where they are in conflict with their most basic urges.

Dating is an area where we most express, interact with, and experience our own, and others’, gender and sexual identities. It is then only fair that a dating app should allow people to be more than XX and XY chromosome binaries.

This year has been good for India’s gender and sexual minorities. While the Supreme Court decriminalised homosexuality, the government accepted crucial recommendations in how ‘transgenders’ are defined in its Transgender Persons (Protection of Rights) Bill (the earlier definition was restrictive, now the Bill simply says any person “whose gender does not match with the gender assigned at birth and includes trans-men, trans-women, gender-queers, and other sociocultural identities.”).

However, for such minorities to be able to have a truly free and fulfilling existence, inclusivity needs to move beyond legal and legislative spaces, and touch life as we live it.

Hopefully, with this step by Tinder, people will learn and live sexuality in more liberal, more liberating ways.