Tata Institute of Social Sciences (TISS) was in the news recently for a strike over the institute's decision to withdraw financial aid to students from the Scheduled Castes, Scheduled Tribes and Other Backward Classes, who were eligible for the Union government's post-matriculation scholarship.

The strike stretched for over 100 days.

But the students were not aware of the consequences they would face due to the strike. Fahad Ahmad, general secretary of the TISS students' union, who was at the forefront of the agitation, has been denied his PhD registration by the administration.

Fahad reportedly cleared all entrance tests, including a viva and submitted his MPhil thesis too. He was reportedly denied PhD admission because of his participation in the struggle for continuation of financial aid to marginalised students. 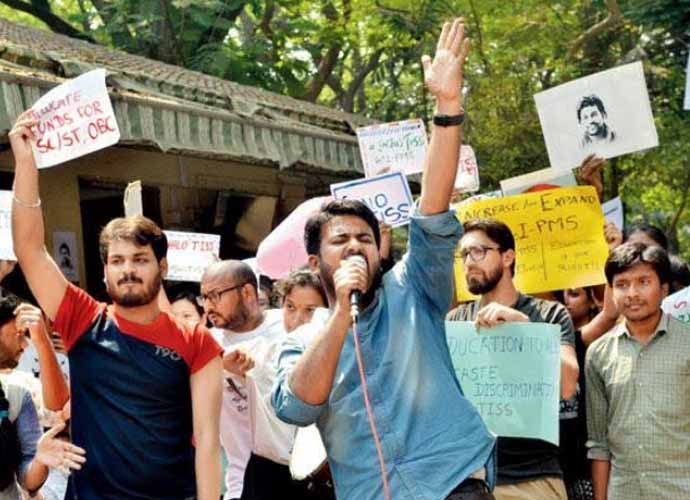 Fahad Ahmad has been denied admission to PhD by TISS. (Photo: Via author)

Here is what TISS reportedly told Fahad while denying him admission: "As a recipient of the Junior Research Fellowship from the University Research Grants Commission, you are aware that the grant of fellowship by the UGC which comes from public funds is regulated by the guidelines issued for availing JRF. One of the conditions therein pertains to maintenance of discipline during the period of residency in the institute.

"Between February 20, 2018 till March 28, 2018, you have been involved in protest against the institute during which you engaged in various disruptive illegal activities including obstructing persons (staff and residents)... You along with others also failed to favourably respond to appeals of the institute and therefore the institute was left with no alternative, but to approach the appropriate court of law which granted prohibitory orders and the said matter is now pending before the honourable court."

TISS is considered a highly reputed institution for the study of the social sciences. Students not just from India but world over look to TISS for admission to study and do research.

Many students from the institution have pursued PhD research work on issues of the most marginalised people, including SCs and STs.

So, it was surprising to see that when students like Fahad Ahmad raised their voice against the rollback of financial aid provided to SC/ST/OBC students, the TISS administration locked horns with the students' body.

It was because of this confrontational approach that a problem that could have been resolved amicably has become a flashpoint between students and the TISS administration.

The tussle reached a point where the institution's convocation ceremony saw many students refusing to accept their degrees.

Fahad was one of those students. Fahad Ahmad refused to accept his degree as a mark of protest. (Photo: Via author)

He went on to add that if he's denied his fundamental right to education, the students will collectively struggle against the draconian decision of the TISS administration.

Many compared the TISS student agitation to the famous agitation which struck the JNU campus where Kanhaiya Kumar, a young leader, was allegedly targeted for asking questions of the government.

A country that proudly claims to be the world's largest democracy cannot curb student movements with an iron hand.

Why are we suppressing the voices of youngsters who are the future of our country?

Is the government afraid of young students like Fahad, who dare to ask the establishment tough questions?

Ironically, social sciences teach us the significance of debates and the importance of questioning the powers that be for the health of democracy.