The Army-loving, Swachh Bharat-spearheading Rustom star is the Indian poster boy of patriotism.

Yes, Akshay Kumar has successfully ticked all the “Right” boxes. And with Toilet: Ek Prem Katha he has successfully managed to add a whole new layer to that image. The prime minister’s mission, at its two-and-a-half-year-mark, however, has not attained quite a lot. According to a report card prepared by IndiaSpend, of the 193,081 villages to be Open Defecation Free (ODF), 53.9 per cent of these have not been verified, as of yet.

Additionally, despite a construction spree - between May 1 and May 21, 2017, 489,710 individual household latrines were constructed across the country - 51.6 per cent of households across the country did not use an improved sanitation facility. In fact, the guidelines of Swachh Bharat Abhiyan requires 8 per cent of the funds allocated to be used for information, education and communication (IEC) activities. From 2016 to 2017 only one per cent of the total expenditure had been made on IEC. So perhaps , Akshay Kumar’s movie comes at a good time. 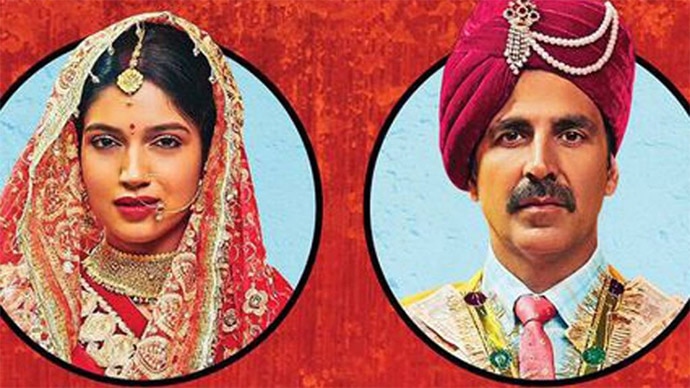 But is that this entire movie is aiming for? Educating the masses about the effectiveness and the sanitary benefits of not defecating in the open?

The film is reportedly based on a real-life incident where a bride left the groom's home after the wedding. The satirical comedy takes it further with the protagonist’s attempt to build a toilet in the village, in an attempt to win back the affection of his wife.

“I am just doing my work by picking subjects that I like. I read the toilet story in newspapers and when I found that somebody has already written a script around it, I decided to go for it,” said Akshay Kumar to The Hindu.

On one hand, when we have a lot of thespians and artists openly criticising the Modi regime and the growing intolerance in India, the flipside consists of a slew of famous actors who are building an image that aligns a lot with the ruling government. And while we have the likes of MP and actor Paresh Rawal who openly asks for a war crime to be committed upon Arundhati Roy, and Ajay Devgan who makes ignorant remarks about the effects of demonetisation, we have the more suave and careful Akshay Kumar, who gets the photo-ops but says nothing much.

And is he reaping the benefits of it? Pretty much. Thanks to his affable image, and his rather careful picking of this subject, the man has received the blessings of the prime minister on his upcoming venture.

Barely a month ago, Akshay Kumar was given the best actor award for Rustom at the 64th National Film Awards, when there were clearly better contenders with from better movies with far superior acting abilities. But of course, Rustom had him waltzing around in a naval officer’s uniform, so that does the trick.

But benefits and perks he is receiving aside, the fact that Akshay Kumar is making a movie about open defecation is a pretty big deal. The entertainer has a country-wide appeal, perhaps only to be contested by Shah Rukh Khan and Salman Khan. And cinema, especially mainstream cinema has a gigantic scope. The medium that surpasses class and caste can be a powerful tool to spread this important message and for that one can only hope for his success.