Everyday, we come across stories that challenge the way we have traditionally perceived institutions, constructs and practices. Such is the tale of Aarav Appukuttan and Sukanyeah Krishna, who found love in the unlikeliest of places – a hospital.

Three years ago, 46-year-old Appukuttan met 22-year-old Krishna at a Mumbai hospital where the former underwent a sex reassignment surgery and the latter was there for her first appointment for the same.

Appukuttan was born as Bindu and Krishna was born as Chandu. Neither conformed to the gender they were assigned by society. One was a man trapped in a woman’s body. The other, a woman trapped in a man’s. According to Appukuttan, their meeting was purely by chance and it all happened because he managed to eavesdrop while Krishna was speaking to her family on the phone in Malayalam at the Kokilaben Dhirubhai Ambani Hospital in Andheri.

A conversation began, and a three-hour-long wait for the doctor was enough time for them to get to know each other and exchange numbers.

Speaking to MidDay, Krishna recalled: "I got a call from a relative, and I was speaking to them in Malayalam about my surgery and health. When I finished my call, he was talking to someone on the phone in the same language. After disconnecting his call, Aarav came to me and asked whether I am from Kerala, after which we got talking." 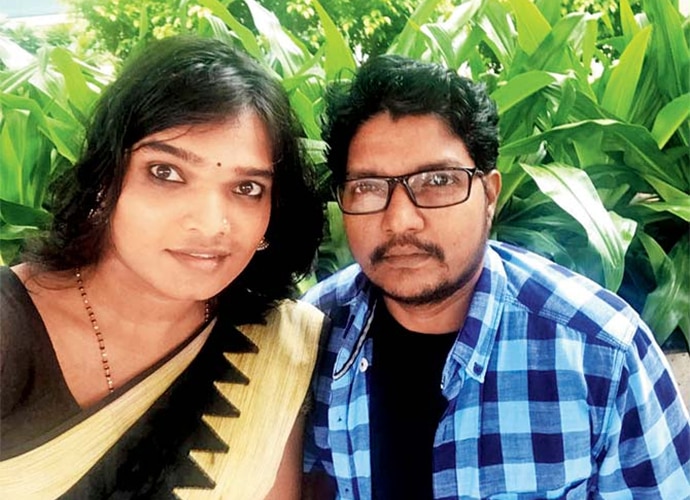 "He went to Kerala and I returned to Bangalore, where I had moved two years ago for my job. A day later, Aarav called me and we discussed our surgeries and our treatment in detail. At first, we would speak once a week, then it became twice a week. Soon, we started talking very day," she adds.

This is a love story that bloomed not only out of similar medical experiences, loss of parents, a common dissociation from their society-assigned gender and a common mother tongue, but also out of empathy – both Appukuttan and Krishna counsel parents with children who identify as transgender. Neither of them had a happy childhood.

Appukuttan recalls feeling unnerved by the attraction he felt towards the girls he would sit beside in class. He said, "Since childhood, I had a strong feeling I was born to be a boy. When I was 13 years old, I realised I was not a woman. After I moved to Mumbai, as I wore men's clothes and cropped my hair like a boy, the women in local trains would yell at me when I boarded the ladies' compartment."

He even confided in his mother about this, who then took him to a doctor. The doctor said problems like these were common during the onset of puberty because of hormonal imbalances, and her asked to wait for a few years before opting for treatment.

A few years later, however, he lost his mother and shifted his focus to his sibling, who needed his care. “I used to hate my body and wanted to cut it sometimes. But, I had to restrain myself and keep my feelings in check for 45 years. I always behaved like everything was normal,” he said. It was only after he went to Dubai that he managed to save enough money to go ahead with a gender reassignment surgery. "In a year, I changed totally, from female to male. Even my moustache and beard started growing," he added.

Krishna too had tough beginnings. Born as Chandu, Krishna experienced gender dysphoria at a young age. "They told me to wear boys' clothes and to play with boys. I would always ask them why they treated me like a boy even though I felt like a girl on the inside," she said.

Krishna’s childhood was full of humiliation, taunts and mockery. From the way she walked to the way she talked, every one of her moves was mocked by her peers. In fact, her family, far from being supportive, tried to “fix the problem”; by taking her to see a doctor who gave her hormonal injections that resulted in several health issues. These health issues also resulted in her being unable to appear for her SSC examination.

“With the therapy, my facial and body structure changed. I started developing muscles, my shoulders became broader and I lost a lot of hair on my head,” she said. “No one understood what I was going through. During my Class 10 board exams, I fainted owing to the pressure,” she added.

Once she turned 18, it took her a year to convince her family of a sex-change operation. Soon, she moved to Bangalore and started working as a web designer to earn for the expensive surgery.

The Transgender Persons (Protection of Rights) Bill introduced in Parliament in 2016 was aimed towards guaranteeing equality and promoting welfare for transgendered people.

The bill, which came in the wake of a 2014 Supreme Court judgment – one which said those feeling removed from the binary gender, should be treated as the third gender. It also upheld a transgender person’s right to self-identified gender – and came under fire when it was finally introduced.

But things are not entirely disappointing.

But legal recognition or not, the trans community does not stop itself from declaring love. 2016 saw the first public transgender wedding in India, when Madhuri Sarode married Jay Kumar Sharma at a temple in Mumbai.

“We wanted a small marriage ceremony, but our friends are asking for a treat. So, we will have a grand wedding,” says Appukuttan.

Aarav Appukuttan and Sukanyeah Krishna's story brings hope. After all, what more can one ask of a love story, that triumphs not just hate, but convention, society and biology?