Why India needs holistic implementation of laws for LGBTQ+ community

The mere recognition of their community as the third gender is not sufficient. Laws must ensure that their community is holistically accepted in the fabric of Indian society.

In a unique initiative, the Noida Metro Rail Corporation (NMRC) decided last month to convert Aqua Line's Sector 50 Metro station into a 'She-Man' station in order to promote transgender rights. It also plans to include members of the transgender community at ticket counters and other areas of the station. Just a few days ago, Assam became the first state in the country to form a welfare board exclusively for transgenders.

Much earlier, in 2016, Odisha had become the first state in the country to give transgender people social welfare benefits such as a pension, housing and food grains — usually allocated for only the most impoverished and those living below the poverty line (BPL). This includes free housing, 100 days of paid work annually, pensions and loans to start their own businesses. They are also entitled to 5 kg of food grains every month under the National Food Security Act. Similarly, recently in another progressive gesture, the Bhubaneswar Municipal Corporation (BMC) roped in members from the transgender community to collect pending property taxes of around Rs 11 crore. In Rourkela, they have been drafted as Corona Warriors.

As per Census 2011, there are 4.9 lakh transgenders in India. On April 16, 2020, the Indian transgender community celebrated six years of the landmark judgment of the Supreme Court in National Legal Services Authority (NALSA) vs Union of India, wherein the apex court recognised the right of transgenders to self-determine their gender identity. Two days later, on April 18, 2020, the Government of India released the draft rules on transgender rights in the exercise of the powers conferred on it by sub-section (1) and (2) of Section 22 of the historic Transgender Persons (Protection of Rights) Act, 2019 (parent law) passed by the Indian Parliament in November 2019. While some stark anomalies in the law have been pointed out by activists and experts, particularly relating to the additional requirement of a certificate from the District Magistrate so as to be officially recognised as "transgender", coalescing diverse trans identities like persons with intersex variations, genderqueer and persons with socio-cultural identities as kinner, hijra, aravanai and jogta into one umbrella and not aligning provisions in IPC (for crimes relating to sexual and physical abuse) and several other bigender laws with the new transgender law, a number of issues relating to operationalising even the existing law as enacted remain.

Education: There are no provisions that mention how people from the community are to be protected from discrimination and humiliation in schools and other educational institutes. Trans students experience resentment, prejudice and threatening environments in schools, which leads to significant dropout rates, with very few trans people advancing to higher education. There are no reservations for their higher education prospects either.

Employment: Transgender individuals in India often face stigma and systematic exclusion in employment. This takes many forms and can include termination, failure to hire, demotion, and hostile work environment among others. There is no provision for separate toilets for them either in educational institutions or in offices and they are not allowed entry into the regular toilets meant for men and women. No comprehensive law exists yet to put an end to all such issues. Workplace-related research on lesbian, gay, bisexual and trans (LGBT) individuals reveals that trans workers are the most marginalised and are excluded from gainful employment, with discrimination occurring at all phases of the employment process, including recruitment, training opportunities, employee benefits, and access to job advancement. Unemployment, low-paying and high-risk, and unstable jobs feed into the cycle of poverty and homelessness. As a result, some feel they have no alternative but to turn to sex work. HIV prevalence among India's transgender community is 26 times higher than the national rate and at the same time, it is difficult to access healthcare without facing discrimination.

Housing: The Centre has failed to address the most basic issue faced by the trans-community vis-à-vis housing. Sexual orientation or gender identity is nowhere specified as protected classes for availing the benefits of Centre/state-funded housing initiatives. Many times, landlords do not let their houses on rent to trans people for fear of drawing social stigma and consternation.

Public spaces: This is another area where transgender people commonly encounter discrimination. Public spaces include everything from restaurants to shops to banks — and people can experience humiliating treatment in these environments. There is no central law prohibiting sex discrimination in such public accommodations. Most transgender people are in very bad condition because of social exclusion.

There is a lack of sensitivity regarding the issues that people from the LGBTQ+ community face. The mere recognition of their community as the third gender is not sufficient. Laws must ensure that their community is holistically accepted in the fabric of Indian society. 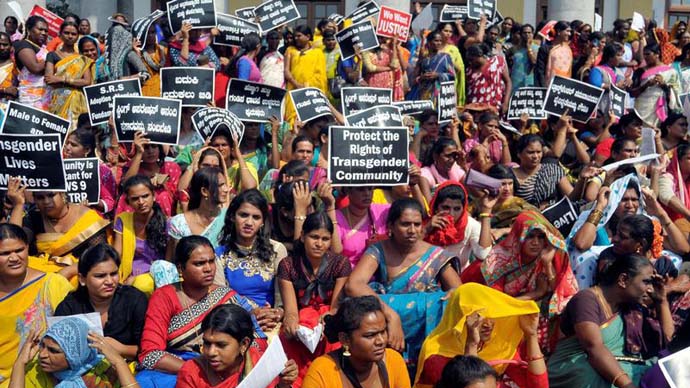 There is a lack of sensitivity regarding the issues that people from the LGBTQ+ community face. (Photo: Reuters)

The international community's recent commitment to Sustainable Development Goals (SDGs) presents an opportunity to catalyse and expand positive interventions. The SDGs are guided by the UN Charter and grounded in the Universal Declaration of Human Rights (UDHR). They reiterate universal respect for human rights and dignity, justice and non-discrimination, and a world of equal opportunity permitting the full realisation of human potential for all irrespective of race, colour, sex, language, religion, political or other opinions, national or social origin, property, birth, disability, or other status. India is a member of the UDHR and needs a holistic implementation of laws for the LGBTQ+ community that actually relieves them of their real struggles.

Also Read: Being a transperson in India during Covid-19 pandemic