What the TRP bomb means for the future of media

There is a major disruption around the corner in the world of media. No one knows the shape of things to come, but it is for certain that content will once again be the king.

The TRP time bomb had been ticking for a long time though the trigger may have been pulled yesterday for collateral reasons.

A silver lining during the pandemic missed by many is the gradual return of advertisers to print media — in particular the vernacular papers. Like many other industries, mainstream publications that were till now lukewarm about the web discovered the virtues of digital. Problems of physical distribution forced publishers to revisit their digital strategy. Many top papers went behind a paywall and were encouraged by the response of subscribers. In the age of apps, a sizable section of readers was happy to read papers on their phone, tablets or PCs.

While this indicates a change in habits and customer preferences, it also reveals a growing disenchantment and fatigue with the changing format of TV news. During the days of Doordarshan watching television was like a social occasion at home or in villages. After that, with the advent of commercial news channels, TV became a source of wholesome news and wrap up of the day’s events from politics to sports. There was a healthy complementarity between TV and newspapers. People got the top-line and perspective from the television in the evening and looked for in-depth news, analyses and views from the morning papers. 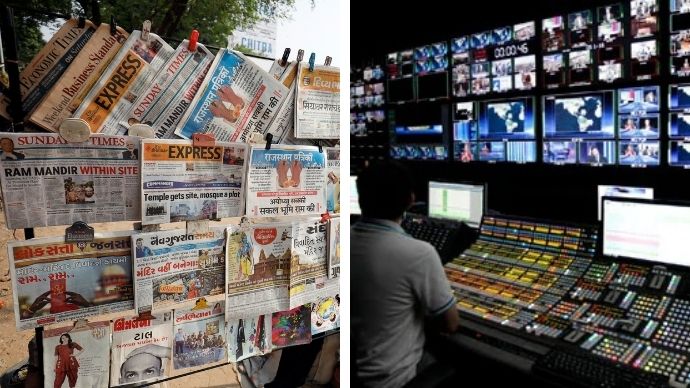 Just as the newspapers had followed a policy of ‘dumbing down’ the content, TV news channels turned to competitive sensationalism. (Photo: Reuters)

The landscape changed when TV news channels started competing with general entertainment channels in the race for TRP, and news morphed into infotainment to attract more eyeballs. This first happened with Hindi and regional language channels. To get a larger share of the advertisement pie, they attempted to expand viewership base among non-readers of newspapers and consumers of non-serious news. That gave birth to the genre of ‘sansani’ (sensational) TV News.

However the biggest innovation — or one may call it an invention — of Indian TV journalism was the creation of politics as a form of mass entertainment. Matters went to another extreme when the English news channels discovered that if they remain stuck with the old BBC and CNN style of programming, targeting the “high-brow” audience for whom English was the primary medium of consuming information, the market for them would shrink like the readership of editorial pages of mainline English dailies.

So, pretty much like newspapers had followed a policy of ‘dumbing down’ the content, English TV news channels, vying with their vernacular siblings and general entertainment cousins (primarily in the Hindi-speaking heartland), turned to competitive sensationalism.

As a result, real news vanished from TV. Studios turned to WWF (wrestling) sets day after day, evening after evening. So much so, those who genuinely wished to know what was happening around the country and the world would draw a blank even if they sat before the television for hours. There could be tension in Ladakh border, Presidential elections in America, floods in Assam or blasts in Beirut, but TV anchors will be busy debating a single issue of their choice giving everything else a miss. Everything started being measured in terms of marketability — as reflected in the Broadcast Audience Research Council (BARC) viewership ratings — sliced and diced as per convenience, flashed every week. The economic climate of the country was of as little interest, like the daily weather, if it did not generate the numbers.

In such a situation where does the reader or viewer go? First, social media was seen as a source of salvation. But, soon people realised that in times of ‘fake news’ there were serious credibility issues with Twitter, Facebook and WhatsApp. Though many news portals and YouTube news channels mushroomed nationally and regionally as did some hyper-local ones, their trust quotient was abysmal.

However, looking at the brighter side, this could potentially be a watershed moment for media. Some media experts are predicting that a radical change in programming format of TV news is inevitable as the advertisers will not be comfortable for very long with associating their brands with a toxic ambience. So, is there a future for subscription-based news channels? Will viewers be willing to pay a premium for an advertisement-free environment in return for quality news? Greater dependence on subscription should increase accountability among producers because otherwise, viewers will shift their bucks to competitors. But, it will require an overhaul of the TV business model going back to the drawing board and these are early days yet to make a sanguine call.

However, all this can augur well for the written word — whether in printed or digital format. Research indicates that be it in literature or in news, writing has greater longevity and believability than talking heads and moving pictures. A post-Covid world may see a lowering of physical commute and rise in remote work. This, by definition, will be largely a knowledge-based economy.

Whether it will lead to people reading more, one cannot say for certain. But it should definitely stir the need for quality information and news for a variety of reasons. Being confined to the home and much-reduced social interaction, people will look for sources to keep updated about what is happening around the world and the latest development in various fields. With lesser opportunities for conversations, debates and sparring, the “argumentative Indian” will turn to the media for intellectual stimulation in the form of analysis by well-known commentators and opinion of thought leaders. Not the kind that happens in loud TV debates, but in a more distilled and refined form.

Though it may appear counterintuitive, those of us working from home during the pandemic know that WFH does not free up time for watching television. News consumption habits are changing when people snack on information from their mobiles or laptops in between work and commute.

This is a need gap that print can try to capture — either on paper or digital format. Social media will act as a force multiplier while new platforms like Podcasts can be the amplifiers. The market will get segmented that television with its current ‘one size fits all’ approach will not be able to service.

There is a major disruption around the corner in the world of media. No one knows the shape of things to come, but it is for certain that content will once again be the king. So, in an atmosphere of doom and gloom caused by recent downsizing of media houses, there may be a reason for scribes to smile, after all.