Trump was awarded the

There are some awards and celebrations across the world that are noted for their difficulty, dedication, prestige and honour. The diligent process of selection and filtration makes it so respectable and worthy. A Nobel prize, the Pulitzer prize , a rank in an Ivy League college, a Black Belt Grandmaster in martial arts are few of the many noteworthy events that command a different kind of respect.

But it seems like there are two ways of wearing a taekwondo black belt. What does it take?

In the second method, you just have to be Donald Trump. Sirf naam hi kaafi hai.

The former US President was awarded the honorary 9th Dan Certificate, the highest level in martial arts, by Kukkiwon president Lee Dong-sup at Florida. Even though Trump has never practiced the art; no, not even a day. Trump obviously enjoyed the honour because he thought taekwondo was a 'magnificent martial art for self-defense'. 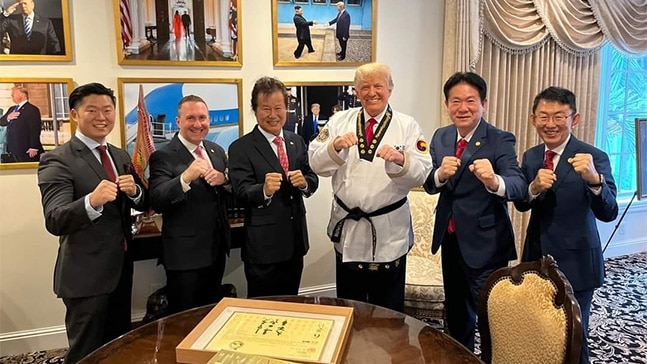 Apparantly, Lee got to know that Trump was quite interested in taekwondo and so a South Korean resident in the US helped organise the meeting. Trump vowed to wear the taekwondo clothing at Congress, if he returned to the White House in future.

Levels up to Putin Many mocked this act of publicity because many consider 75-year-old Trump to be unworthy of recieving such an honorary title. Taekwondo is based on 5 basic tenets- Courtesy, Integrity, Perseverance, Self-Control and Indomitable Spirit... none of which seem very Trump, to be honest.

As a taekwondo marital artist I see this as deeply insulting to taekwondo as an art and to all the fellow fighters...this guy can barely lift his legs...

Why would an Asian American give any award to Trump after what he's done to vilify the Asian community?No, tgf is not worthy of such an honor. https://t.co/PqZVAGkErV

Trump received an honorary black belt from the World Taekwondo Headquarters president at Mar-a-Lago last Friday.Hey, Siri. How do you turn your national martial art into a joke meme overnight? pic.twitter.com/ERPHyBTTB7

I spent 5 years. Took 5 to 6 classes a week to get my black belt. Another 5 years to get my 2nd degree. This is insulting And that is the point

What do you think? Does Trump deserve this?