There is a tree. There is a white-bearded man, though the man in this case is in jail over rape charges.

Jingle bells, and the chime of puja ki ghantiyan. Baubles and lights, roli and teeka. All beautiful, all festive, all to gladden the hearts of believers.

As most of the world celebrates Christmas, some in India are celebrating Tulsi Pujan Divas, or the day to worship the plant Tulsi.

Tulsi Pujan Divas, which seems to be a relatively recent phenomenon pioneered by the Asaram Trust, has many parallels with Christmas. There is a tree, there are rituals to decorate the tree. There is even a white-bearded man, though the man in this case is in jail over rape charges.

Asaram has an old habit of "rescuing" days dedicated to “western festivals” and suitably Indianising them. The intellectual property rights of celebrating Valentine’s Day as Mother Father Day, too, rest with him.

Tulsi, the basil plant, is sacred to Hindus, and is worshipped across India. It features prominently in a lot of Hindu rituals, and as it happens, already has a day dedicated to it.

Tulsi is a consort of Lord Vishnu, and their marriage is celebrated annually as Tulsi Vivah in the lunar month of Kartik shukla paksha, between prabodhini ekadashi and poornima (between the eleventh day and full moon day of the waxing cycle of the moon). This year in north India, the day fell on November 1.

However, there is nothing wrong in dedicating another day to her. It appears that the observing of Tulsi Pujan Divas involves planting a Tulsi at your home, watering it, and following the usual puja rituals. So far, so good.

But a festival is supposed to be a day of celebration. Whether we observe Tulsi Pujan Divas or Christmas, let’s be motivated by positivity and cheer, and not out of competitive festivity, insecurity, or the desire to keep out the “other”.

One of the reasons Asaram’s website lists out for observing Tulsi Pujan Divas – started in 2014 – is that around this time every year, substance abuse, suicides and other immoral activities go up, especially among the youth. To rescue them from this debauchery and denigration, he came up with the idea of worshipping a sacred plant instead. 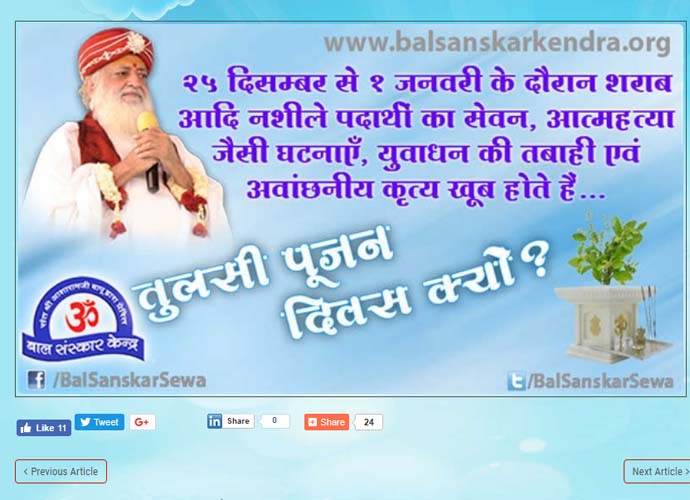 Even if one were to look past the irony of the rescue plan coming from a rape-accused, there are other fundamental problems with this premise. Substance abuse and suicides are not part of any culture, and efforts to stem both should be made all year round.

Also, some propagating Tulsi Pujan Divas seem to be treating it as a defence mechanism against the invading armies of western, “foreign” culture, which is making “Indians” forget their own heritage.

So far, Christmas does not seem to have interfered with the celebrations of any Hindu festival. Imagining threats where none exist is fear-mongering, not really in keeping with the festive spirit.

Holi or Christmas, Lohri or Eid, are all occasions to make merry, count our blessings, and spread joy. If you erect barriers around festivals, you are essentially limiting happiness.

Tulsi has healing and cleansing properties, it is believed to purify the air around it. Hopefully, planting of Tulsi and worshipping it can also cleanse our brains of the toxins of divisiveness, hatred, and small-mindedness.

Also read: What Salman Khan's Tiger Zinda Hai can teach you about ISIS threat to India

#Christmas, #Tulsi Pujan Divas
The views and opinions expressed in this article are those of the authors and do not necessarily reflect the official policy or position of DailyO.in or the India Today Group. The writers are solely responsible for any claims arising out of the contents of this article.