Protests, even terror strikes, in other nations are handled with sense and sensibility by the police. Why was that completely absent in Tuticorin's Sterlite agitation?

At a time anger in Tamil Nadu's Tuticorin is still simmering, a video released by news agency ANI has highlighted how the killing of 12 people on Tuesday (May 22) was purely an act of extreme state intimidation, causing grievous harm, as well as loss of lives, to the public.

The video shows a Tamil Nadu policeman in plainclothes, armed with what appears to be an assault rifle, parked atop a police bus. On the road where the bus is parked are a large number of policemen — some wearing bullet-proof vests, some without any protection. In a short while, another policeman reaches the roof of the bus. He strides the length of the bus like an expert commando and then takes his position with an assault rifle. The first cop has by now come down.

Then a voice is heard in the background, "At least one should die."

While it is not clear if the policeman seen in this video actually killed anyone, 12 lives were claimed in the police firing that followed. What the video helps to ascertain is that the aim of the police on duty was apparently to kill — not disperse the mob.

In a shameless justification of the killing, Tamil Nadu chief minister Edappadi K Palaniswami said, "The police had to take action under unavoidable circumstances to protect public life..."

Announcing the customary compensation that follows such incidents, Palaniswami fixed the price of each life lost at Rs 10 lakh. He has also announced Rs 3 lakh for the seriously injured and Rs 1 lakh for those with minor injuries.

Tuticorin, unfortunately, is not the only instance where peaceful protesters have been killed or faced extreme police high-handedness.

In January 2017, the Jallikattu protest on the Marina beach in Tamil Nadu spiralled out of control because of the way the police handled the initial agitation. 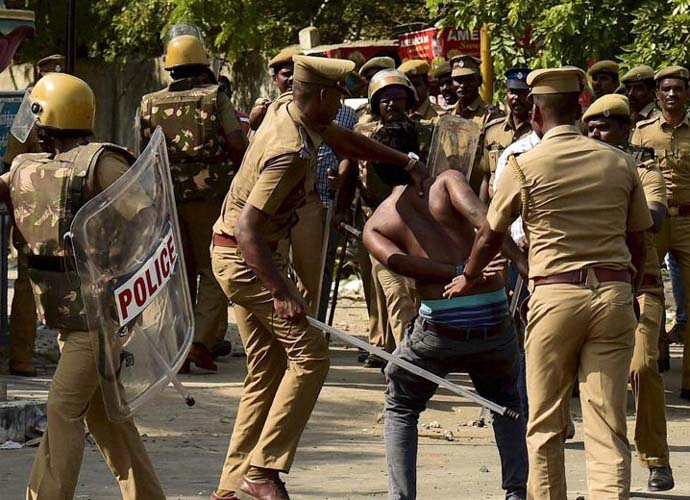 In June 2017, five farmers were killed in Madhya Pradesh's Mandsaur district — they were demanding better prices in the drought-ravaged region that recorded a farmer suicide every five hours in 2016-17. The price of each life lost in the firing in Mandsaur was fixed at Rs 1 crore.

In February 2016, police high-handedness was at full display in the national capital when policemen beat up students who were protesting against the death of Dalit scholar Rohith Vemula, reportedly driven to suicide in Hyderabad over his student grant being suspended.

There are numerous instances that show the state apparently knows no other way of handling protests other than using indiscriminate violence to bring these to an end.

The message from the Tuticorin video is clear: Kill at least one — to scare the others into submission.

We now know that people in Tamil Nadu had been protesting against the Vedanta Sterlite copper plant for the past 99 days claiming the plant was polluting the local environment thereby putting lives at risk. In these 99 days, the Tamil Nadu government made no effort to reach out to the protesters. On the 100th day, the state government sent in the police to kill. For 99 days no one took stock of the Tuticorin protesters.

By what law does the state draw the legitimacy to kill those who demand of it their most basic rights? Who sanctioned the deployment of snipers to take aim at people who committed no crime, other than organise peaceful protests?

Contrast the police action in Tuticorin with what we saw in Canada just last month. A police officer, Ken Lam, refused to be provoked into using deadly force. Instead of gunning down a suspect after a van tore down Yonge Street, felling pedestrians one by one, he held his fire.

This should make us in India question what kind of training we provide to our men in khaki about dealing with their own people. Just how (if at all) sensitised are they?

More than 90 per cent police officers in the city of London carry out their duties without a gun. Most rely on tools such as handcuffs, batons and occasionally stun-guns to keep the city safe.

The administration believes that letting police officers carry guns sends a wrong message to the public and can cause more problems than it actually solves.

The incident in Tuticorin proved the London administration right.

These 12 lives could have been saved, had someone in the Tamil Nadu government bothered to reach out to the people (quite like they do during elections). But it looks like no one was interested in addressing their concerns and everybody in the administration thought this protest could be silenced with a gun. The tragedy is, it is all set to get louder now.

Also read: Why a comeback for Mayawati in Uttar Pradesh looks impossible