Twitter has refused to block all accounts that government wants banned citing freedom of speech.

You cannot distribute what you do not have. You cannot have what does not exist. So, respect the one who creates what you need to have. Prime Minister Narendra Modi today told Lok Sabha that wealth creators should not be abused and derided because we need the wealth they create to distribute to the needy. Fair point if the distribution is fair. BJP said it was unfair for Congress leaders, led by Rahul Gandhi, to walk out of the House even as the PM was talking. What else did the PM talk about? Modi said that andolanjeevis were exploiting farmers and called the farmers’ andolan pavitra andolan. Will that help create pavitra rishta with andolankaaris? Ask time because only time can tell. From pavitra andolan, let’s move over to Twitter and government of India’s not so pavitra spat.

If you can’t decide on what you want to do, you can begin by deciding what not to do, unless you got a problem with taking decisions too. Under pressure from the India government, Twitter was compelled to take a decision on which accounts to block for allegedly spreading “misinformation and provocative content” over farmers protest. In the process of deciding which account to block, Twitter ended up deciding which account it won’t block.

The government of India which asked for a ban on 1,178 accounts, got a blog instead. The blog says Twitter won’t block accounts of journalists, media entities, activists and politicians as doing so “would violate their fundamental right to free expression under Indian law”. So, the government of India took to Koo, an Indian social media platform, to respond. What did it say? “Govt will share its response soon.” Twitter's response to government's demand to ban some accounts. 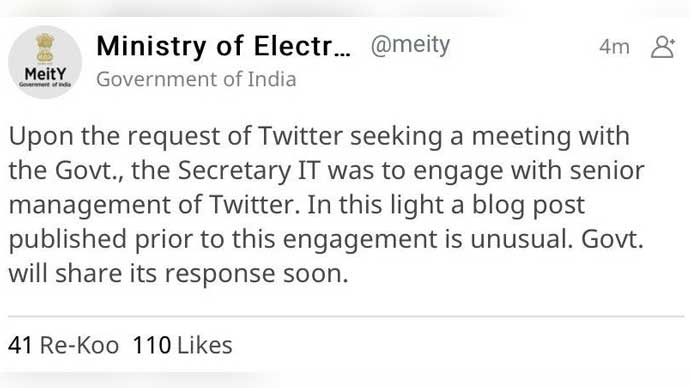 The government's response to Twitter's blog on Koo.

Accounts that Twitter will be acting against are accounts reportedly with Khalistani links trying to create disturbance in the name of farmers’ protest. Delhi Police’s action, meanwhile, has led to the arrest of Iqbal Singh a day after the arrest of Deep Sidhu. Both Singh and Sidhu stand accused of instigating violence on Republic Day which saw the hoisting of a religious flag at Red Fort. Singh was seen in several videos urging crowds at Lahori Gate to enter the Red Fort.

While talking about farmers’ protest, arrests and account blocking over, above and beyond the protests, let us not forget that hundreds are missing in Uttarakhand after the flood that struck on Sunday. Nearly 25-35 people are feared trapped in the 2.5 km-long tunnel. Rescuers are believed to have covered about 120 metres of the 2.5 kms of the tunnel. What stands in the way of the rescuers and the trapped people are debris, slush and the fear of gushing water. The other thing making the operation difficult is the design of the tunnel. There is an entry and then the tunnel branches into two directions. So, you see, before reaching the light at the end of the tunnel, rescuers will be faced with a dark patch till T-point.

The tragedy in the Tapovan tunnel reminded us of the tragedy in the tunnel of a Chilean gold and copper mine. The incident that came to be known as Chilean mining accident happened on August 5, 2010. That afternoon, over 700,000 metric tonnes of rock suddenly caved in. Miners close to the entrance quickly escaped, but 33 men got trapped deep inside the tunnel. Now, mine tragedies are common but this one wasn’t. These men were to be rescued from a depth of 2,300 feet. Exploratory boreholes were drilled. Seventeen days after the accident, a note was found taped to a drill bit pulled back to the surface: “Estamos bien en el refugio los 33 (We are well in the shelter, the 33 of us).” And guess what? The men, all the 33 of them, came out alive after 69 days of remaining inside the tunnel. The note saying 'we are well in the shelter, the 33 of us' that helped save the victims of Chile tunnel tragedy. (Photo: Reuters)

From Chile, let’s take you to America where the Joe Biden administration has said, “India is one of the most important partners in the Indo-Pacific region to us. We welcome India's emergence as a leading global power and its role as a net security provider in the region.” The statement came from US State Department spokesperson Ned Price. All global partnerships come at a price and reading the offer document doesn’t help because the hidden costs aren’t mentioned in the document. Leave the readers to read the offer document and then re-read it to read between the lines.

We will use our time understanding the word partner. Partner is the Word Of The Day. The fact that this happens to be Valentine’s week, however, is purely coincidental. The word is also for those without partners - the alone, not lonely types. Partner comes from Latin word partitionem, which means ‘a sharing, partition, division, distribution’. You when you share something with a person, the person becomes your partner as you become the person’s partner. You could be a partner in crime, or a partner in life, or just someone’s dance partner. The movie Partner (2007) was a copy of the movie Hitch (2005) and since there was no content sharing or content copying partnership between the two, producers of Hitch almost sued makers of Partner. Why did they ‘almost sue’ and not ‘actually sue’ in unknown like most behind-the-scene settlements tend to be.

You can watch Hitch, or watch Partner, or watch one. You can also choose to watch none. We are spoilt for choices that go on to spoil us in more ways than one. One of the ways in which choice spoils us is by luring us to preservative-laced food and beverages. To help you make a healthy choice, we suggest home-made kanji. As always, the recipe is on us. The ingredients and efforts are on you.

You can go grab your ingredients now.

#Farm laws, #Narendra Modi, #Koo, #Twitter
The views and opinions expressed in this article are those of the authors and do not necessarily reflect the official policy or position of DailyO.in or the India Today Group. The writers are solely responsible for any claims arising out of the contents of this article.