Why India should not delay implementation of two-child policy

In 1952, India became the first country in the world to start a government family planning programme.

In 2024, India will become the world's most populous country.

That says something about how effective the programme has been. India is bursting at the seams (Source: Business Today)

While many people suggest that India's population is its greatest strength, given that this population makes for easy and cheap labour, this 1.3 billion plus population — nearly a fourfold increase since independence 71 years ago — is a drain on the resources of the country that is choking due to the pressure of its own people because, despite occupying just 2.4 per cent of the world's land area, India supports over 17.31 per cent of the world population.

India is currently the second most populous country in the world. With about 15 million people added every year, the country contributes more to the annual world population growth than any other country.

In short, India is bursting at the seams.

According to an East Asia Forum report, the total demand for water in India in 2050 is projected to be more than 50 per cent of what it was in 2000.

According to the same report, the demand for food will double in the year 2050 and even if India manages to feed its expanding population, its growth may not be ecologically sustainable.

Also, a nation with this huge a population can hardly be expected to provide a particularly good quality of life to its people. Already about 25 per cent Indians live on less than $2 a day and the country accounts for one in three of the global population living in poverty.

Against this background, about 125 members of Parliament have reportedly signed a writ petition addressed to President Ram Nath Kovind, seeking the implementation of a two-child policy.

A two-child policy is a government-imposed limit of two children allowed per family or the payment of government subsidies only to the first two children.

The two-child policy, famously known as 'hum do, humare do', has been frequently publicised through advocacy ads on trucks or public walls. 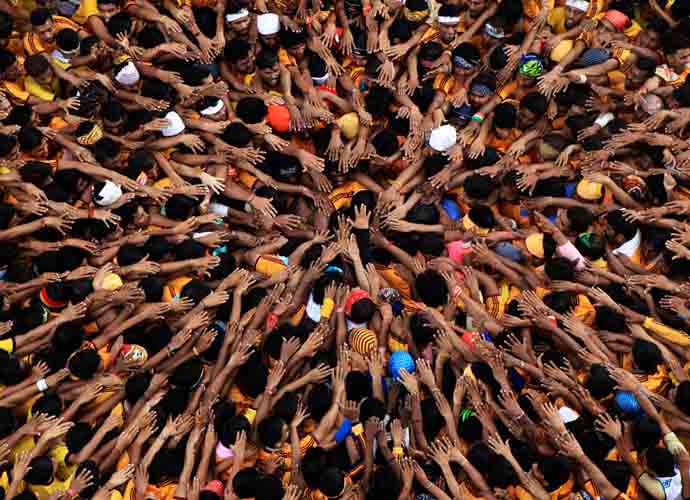 Hum do, hamare hazaaron: India is not prepared to handle this explosion in population (Source: AP)

Four BJP MPs have reportedly submitted the petition to Kovind.

Ironically, some BJP leaders, including some party legislators, have advocated that people produce more than two children. The call has also been made by the party's ideological wing, the Rashtriya Swayamsevak Sangh (RSS).

Uttar Pradesh BJP MLA Vikram Saini recently asked Hindus to go on producing children until a law in this regard was passed. Interestingly, Saini made the remarks while addressing a population control campaign programme.

Unfortunately, it is difficult to see anything in this country without adding a religious angle to it. Most news about fertility rates tends to separate the data by religion.

But India's population problem can best be understood by looking at the data state-wise, not through a religious prism. Fertility rate, the average number of children a woman would have in a given population, shows vast disparities across the length and breadth of India.

West Bengal's fertility rate at 1.64 is lower than that of Norway at 1.75, which is worried about its social welfare system being stretched by an ageing population. Kerala's fertility rate is nearly the same at 1.56.

In contrast, Bihar's fertility rate is a staggering 3.41. Uttar Pradesh's score is nearly the same as Bihar.

Any policy initiative must bear in mind this disparity.

The Infant height map has a remarkable inverse correlation to the state-wise fertility map of India: "Lower the fertility rate, taller the infants"@sanjayuvacha pic.twitter.com/V59QaPAmds

It is for this reason that a lot of people from Bihar and Uttar Pradesh are crossing their state's borders in desperate search of work.

Critiques of the strict implementation of the two-child policy also say that India's fertility rate is dropping and will eventually hit replacement-level — meaning that fewer babies are being born than people are dying — fertility. They however miss the point that even if the nation's fertility rates remain unchanged, the population may double to 2.5 billion by 2100. And even if replacement-level fertility were achieved today, the population would still reach nearly 2 billion by 2100.

We are definitely not prepared to handle this explosion in our population.

It is the right of every individual to live a life of dignity. Our crumbling public transport, overburdened healthcare system, our desperation to get children admission in nursery classes, are all proof that our numbers are reducing us to individuals just managing to somehow breathe and not really live.

The Delhi Metro and Mumbai local trains are examples of how our numbers deny us even a smooth commute to work.

Children cannot just be produced because families need more hands to earn. Because, before these children start to earn, they must themselves be given the best care possible, including quality education and nutrition.

Even the most efficient government, with the best of intentions in place, cannot ensure any of that if we continue to grow at the current rate.

Also read: No water, no growth: India faces its 'worst water crisis' and a drying GDP