Two women enter Sabarimala: Round one to women, but BJP, Congress have much to answer for

The new year has begun on a hopeful note for the women of India. On January 2, two women managed to enter the Sabarimala temple and offer prayers — a full three months after the Supreme Court allowed them to do so.

In many ways, this is the Rosa Parks moment for Indian women.

Discrimination against women on the basis of their gender is no less than apartheid itself. Menstruating women are not dirty, not impure, not a ‘temptation’, not a desecration.

In 1955, Rosa Parks had refused to give up her seat in a bus for a white man. The two women who entered Sabarimala — Bindhu and Kanakdurga — have today refused to give up their space in the public sphere for the prejudices of Hindu upper-caste men. In 1955, Rosa Parks refused to give up her seat in a bus for a white man in Alabama. (Photo: Wikimedia Commons)

The unholy uproar in Sabarimala is a glaring example of what women are still up against — in the 21st century, it took the Supreme Court of India to rule that being of menstruating age should not deny women the right to worship a deity. But the verdict was greeted by a hardening of stand by conservatives, who, for months, have virtually laid siege to the temple.

The protesters found powerful backing in the BJP, the party governing the country. It is the central government’s job to uphold the rule of the law, but the BJP was happier to jettison its duties and pander to its vote-base instead.

The conduct of the national Opposition party, the Congress, was worse — while the party’s official handle put out tweets in favour of the verdict and president Rahul Gandhi backed it, the local state unit was part of the protests against it.

Thus, religious and political power structures joined hands across all manner of divides to deny women their due.

In the midst of all this, while the CPI(M) government in Kerala made all the right noises, it was unable to ensure that the SC’s verdict was upheld. 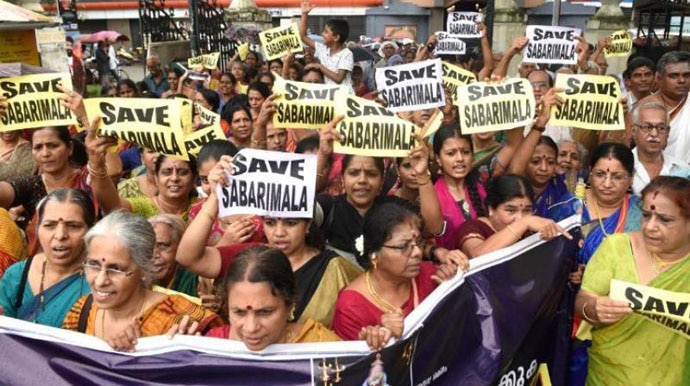 There have been protests against the SC verdict. On January 2, after the women entered Sabarimala temple, it was reportedly closed for 'purification' rituals. (Photo: PTI/file)

But on January 2, by making sure the two women managed to enter the temple, the Pinarayai Vijayan government has shown it is capable of doing its job — upholding the rule of law.

Of course, efforts are already on to paint this as a Communist government’s attempt to ‘attack’ Hindu sentiments. But the function of a government is not to take care of one community’s ‘sentiments’; it is to ensure that what the courts lay down is followed — even more so where the rights of the traditionally disadvantaged are concerned.

Have the Communists desecrated Sabarimala shrine by facilitating entry of women of restricted age group into the temple? Devastating, if true.

On January 1, Kerala had seen another significant event — a ‘women’s wall’, where lakhs of women lined up from the state’s northern Kasaragod district to the southern Thiruvananthapuram district, in protest against "conservative-communal forces, which try to deny women their legitimate rights and renaissance values" (in the words of CM Vijayan). Lakhs came together to form a 'women's wall' in Kerala on January 1. (Photo: PTI)

While it was heartening to see so many women out in public, demanding their due, the fact that the event was backed by the CPI(M) raised questions — instead of making grand statements about a protest, shouldn't the CM make sure women get to use the right the SC had granted them?

By making sure women do enter the temple, Vijayan has shown he is willing to walk his talk.

As for the BJP and the Congress — history will take note which side they were standing on when women were trying to push back against millennia of restrictions.

Sabarimala is not about one temple alone — it is about the long-due de-stigmatisation of menstruation, it is about firmly establishing that no community’s ‘sentiments’ are above the law, it is about demonstrating that the state’s job is to protect the rights of the individual against the threats of a group.

The BJP and the Congress have a choice to make — they can either do the right thing, or go down in history as parties that backed gender apartheid, and made sure their vote banks remained chained in regression and inequality.

Also read: Sabarimala: BJP, Congress both think faith is above the law. We should be very afraid