How I got addicted to Donald Trump

CNN has acknowledged that Trump has been excellent for ratings.

This year, while at the Ziro Festival in Arunachal Pradesh, I felt this strange craving I couldn’t quite put a finger on. I knew I was missing something, something I wanted to the point of desperation.

I couldn’t be missing Delhi, the city I live in part of the year. No one misses Delhi. Which is why half of South Delhi has moved to Goa. I wasn’t missing Dehradun, my hometown—I’d just spent ten months there and was dying to escape.

So what could it be? Poor connectivity? I’m not a social media addict so it couldn’t be that either. In fact, I was positively relieved that there was no Internet. The lack of a television? Was I really missing Arnab Goswami or Sambit Patra that much?

After a day of gigging, I’d lie on my bed, unable to sleep, counting numbers. Then it came to me, in a lightening moment of epiphany: I was missing Donald Trump. I had, as much as I’d hate to admit it, become a Trump addict. I was never into The Apprentice. My obsession started much later. (Photo: Reuters)

My Trump addiction started in his election year. Without realising it, I was watching Trump every night on TV. Despite being a crap TV buff all my life, I was never into The Apprentice and the ‘You’re Fired’ avatar of Donald. I’m addicted to Trump the President.

There’s good reason for this. On the first day of his presidency, Trump reportedly told his aides to treat each day of the term as a new episode of a reality show. He’s kept his promise and we, the viewers, have rewarded him with high ratings. There is no better reality show than the White House.

Like with all addictions, it starts bit by bit. And then, it takes over your life. As I would soon realise: I wasn’t consuming Trump, Trump was consuming me. It would start with the early morning tweets. A late riser by habit, I started waking up early and tuning into National Public Radio (NPR). I am addicted to Donald Trump, the President, who got the world interested in American politics. (Photo: Reuters)

Post-dinner, it was always CNN. I’d bought a new Amazon Firestick but the fired-up TV did not interest me at all. My record is shameful: I’ve only watched two episodes of Sacred Games on Netflix. My friends called me up and said: We have done it; India has done it. Apparently Sacred Games was a national achievement. I couldn’t be bothered less. I wanted CNN, night after night.

CNN is relentless. Trump drops a tweet and within minutes the channel has a panel of ten scrubbed beautiful, handsome people analysing it threadbare. It’s soothing. It’s relaxing (if you’re not a liberal American). It’s ugely entertaining. It’s not intellectually taxing like binge-watching a thriller series, where one has to keep track of who did what and when.

Nowadays, I don’t stop at CNN either. RT, or Russia Today as it was known earlier, is also pretty intense when it comes to Trump coverage. RT has a disproportionate obsession with American politics; the Trump toy train runs on a loop. 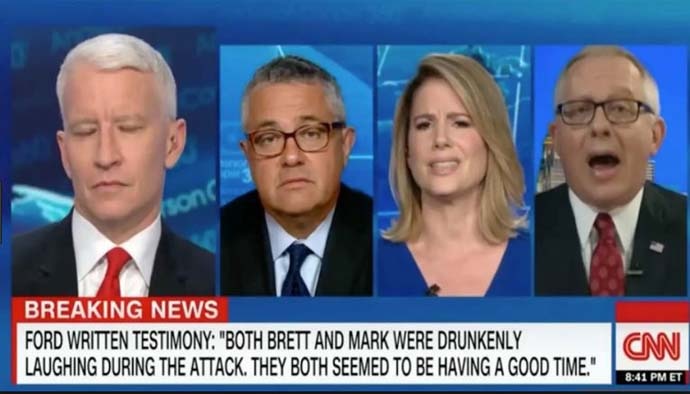 CNN has acknowledged that Trump has been excellent for ratings. For people like me, sitting in the foothills of the Himalayas, Trump is a TV phenomenon, a high-definition myth. He doesn’t give me palpitations or make me want to leave the country or call my shrink. He keeps it interesting at all times, for Trump strikes me as someone who gets bored easily , and the last thing he’d want is for the audience to get bored. He’s a genuine TV star who cares deeply for the viewer. Earlier, one didn’t even realise when the American midterm elections happened. This time we even knew the results. (Photo: Reuters)

One of Trump’s biggest achievements is that he has got the world interested in American politics. I’ve always loved reading American writers, like Joan Didion, John Updike, Gore Vidal and Joyce Carol Oates, except when they start writing long pieces and tomes about the Democratic and Republican conventions, and the inner workings of American governments. That stuff can get so opaque for an outsider. And so, while I devoured fiction and non-fiction by these writers, I stayed off the political stuff.

Before Trump, Obama had some international TV appeal, but only once in a while when he delivered a stirring speech or appeared on talk shows at the end of his tenure. George Bush we knew for his gaffes and the invasion of Iraq. But I can’t think of any American president who one followed speech after speech, tweet after tweet.

These days, one feels quite knowledgeable about American politics. One knows that Brett Kavanaugh was the President’s Supreme Court nominee. One knows there is something called the Senate Judiciary Committee. In the past, the appointment of the ‘Associate Justice of the Supreme Court’ wouldn’t have been of much interest to the rest of us living elsewhere.

Similarly, the recently concluded midterms again drew the international viewer in. Earlier, one didn’t even realise when the American midterm elections happened. This time we knew how the race shaped up, and that the Republicans control the Senate and the Democrats the House.

With Trump, it’s the daily show. He learns about the American presidency (and government) as he goes along, so do we. Trump is addicted to Trump and I to him.

Also Read: The tragedy of being Donald Trump