An ode to coffee

Harper's Bazaar raises its cup to six start-ups that are changing the way we brew.

There’s more to coffee than chain stores and instant powders. In fact, there’s a new vocabulary emerging, one that pays attention to flavour, the environment, the roots of your morning cuppa. There’s single-estate (sourced from one plantation) and shade-grown (grown under a plush forest cover). And you can forget the pre-packaged granules simply stirred in hot water. Now, you have different grinds depending on the equipment. Have a French Press? Opt for coarse. Finer for the siphon-like Aeropress, medium for filters and the Moka Pot you use over a burner. Then, the roasts. What’s good for black coffee, and what works with sugar and cream.

Since when did caffeine get so complicated, right? Don’t worry. The new breed of Indian coffee entrepreneurs will tell you what you need to know, and more. Bazaar raises its cup to six start-ups that are changing the way we brew. 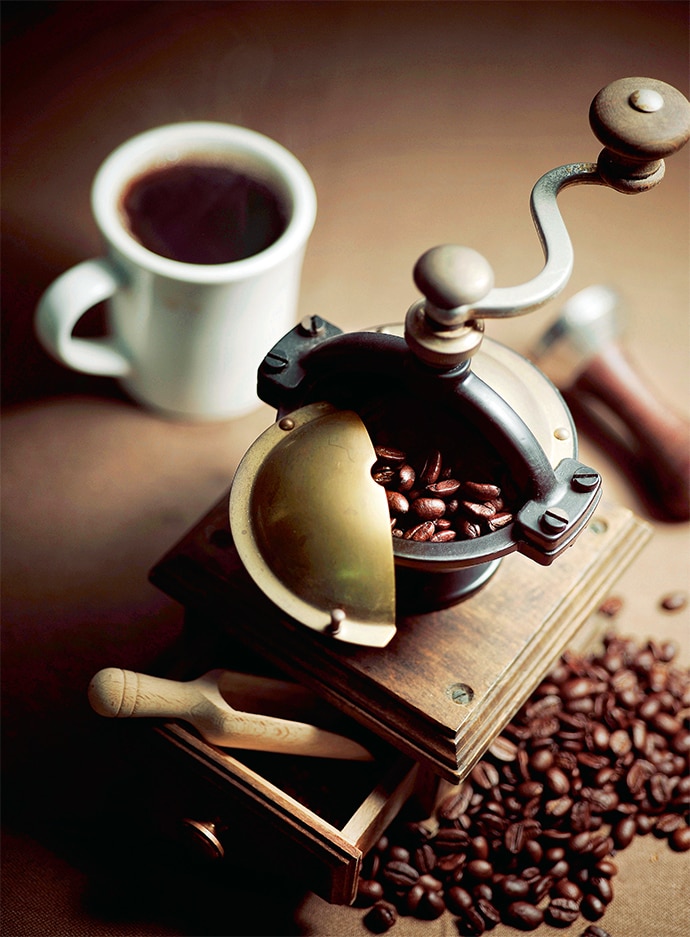 “The idea was born out of our own need for a fresh pot of good coffee,” says Matt Chitharanjan, who co-founded Blue Tokai with his partner Namrata Asthana. An avid coffee enthusiast, he roasted his own grind every day for several years to brew the perfect cup.

Having worked primarily in the United States—Chitharanjan as an economist and Asthana as a communications consultant—and later in Chennai, freshly ground coffee was never scarce, until the duo moved to Delhi in 2012 for a change of pace. A few months later, “we decided to start BT on our honeymoon in Ladakh,” he says. They took crash courses in coffee-making with Bengaluru’s resident coffee expert, Sunalini Menon, at her Coffee Lab Pvt Ltd, and six months later, in January 2013, Blue Tokai was born. 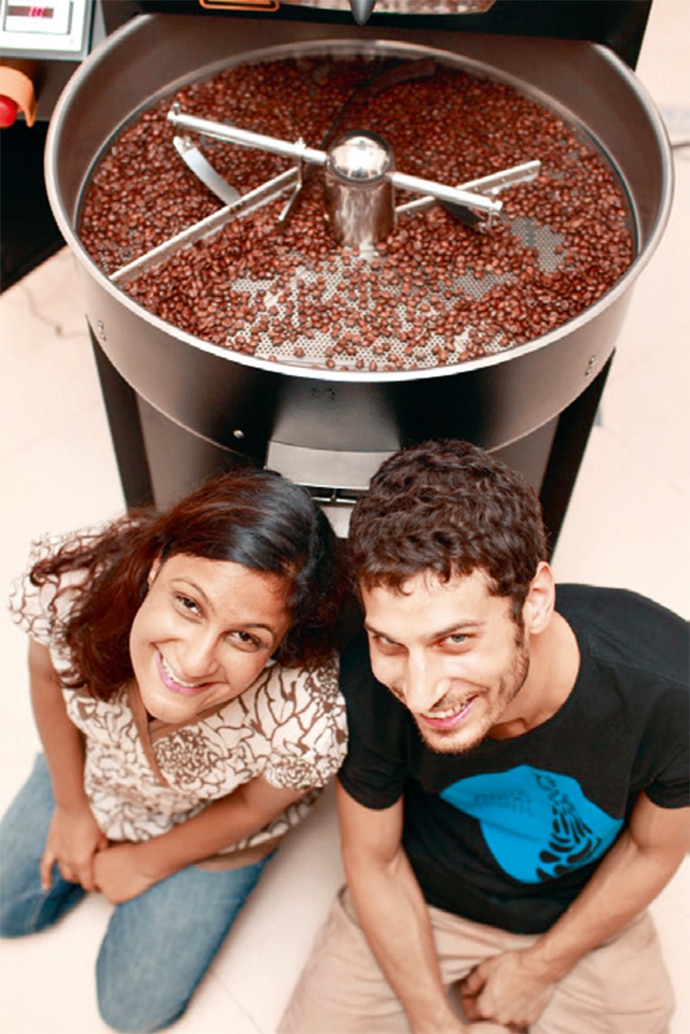 He roasted, she worked on packaging, and they taste-tested 15 coffees before settling on the eight coffee producers they now retail. Try their fruit-and-nut flavoured certified organic arabica beans from MS Estate. We also love that their bags carry the roasting date and estate name, and come etched with Gond and Mata ni pachedi folk art; they’re now planning to add Warli art as well. Beginners take note: Their website also packs an extensive curation of manual coffee brewing equipment and grinders.

Earlier this year, they added another layer to their growing coffee kingdom by launching two café-cum-roasteries in Delhi, and one in Mumbai later in July. Country domination, one step at a time. 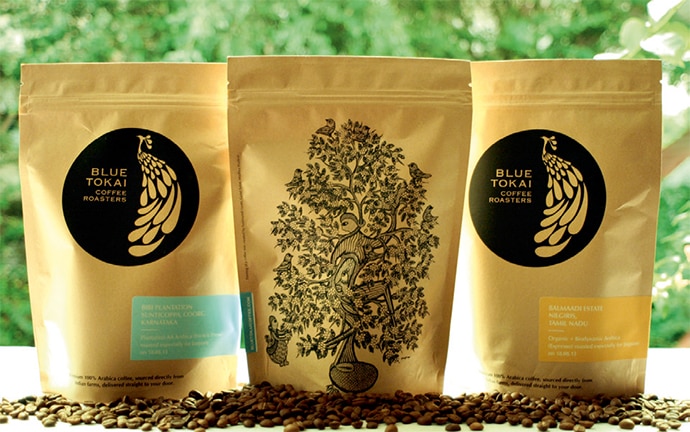 Tej Thammaiah had fuelled his friends’ coffee addiction for many years. A third-generation coffee farmer and owner of the Nellikad Estate at Pollibetta in Coorg, he had access to some of the choicest beans in the country. Conversations over cups of this quality coffee eventually led to what is today The Flying Squirrel. Headed by five of them—Tej, Ashish (an ex-advertising executive), Sreeram (operations), Laeeq (business development), and Ravi (digital marketing)—the boutique brand was formed in 2013. 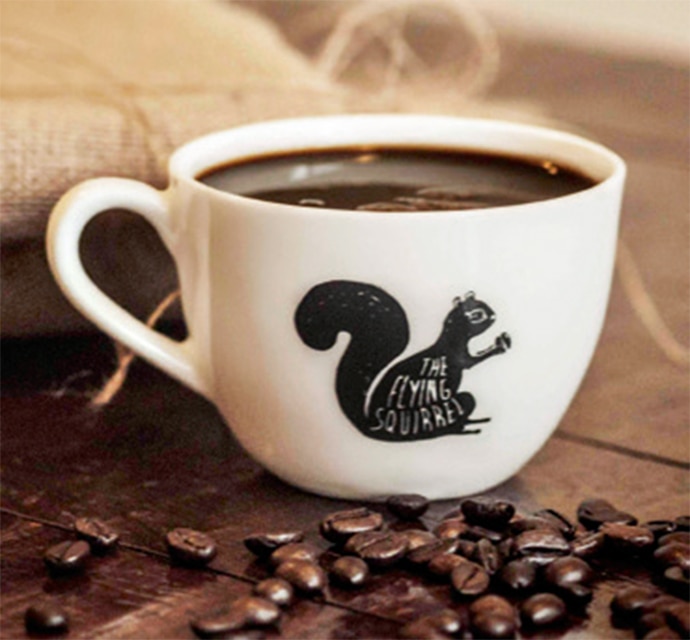 “Our first few years were filled with research, development, and taking stock,” says Tej, asserting that consumers need to understand that coffee is a perishable product. As owners of a plantation, he continues, “We have a) pick of the crop, b) no bad bulk buys, and c) can also tell the different between bean grades, unlike many roasters.” They retail at the best stores, and sell what they consider lower quality to bulk buyers.

The Flying Squirrel is named after the estate’s most frequently seen visitor, the Malabar squirrel, and we love that they retail their specialties. There are seven gorgeous coffee blends, and brewing equipment like an Aeropress, milk frothers, dripper paper, the Chemex, south Indian brass filters, espresso, and pour-over coffee kits. 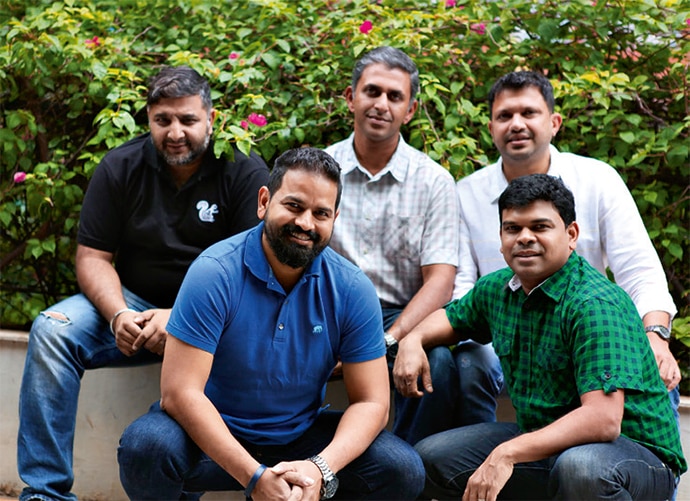 Ashish ends with, “Looking ahead, we would like to take the brand pan-India by starting roasteries-cum-cafés,” referring to their recent Bengaluru café launch. “We’ll work from the ground up. There’s a long way to go, but one thing is for sure: No more Nescafé.”

Kunal Ross developed a taste for quality coffee early on. The percolation process, he claims, started, “at a coffee tasting in culinary school, because tea was never my cup of tea.” So even after moving from hospitality to advertising—first with Bates and later with J Walter Thompson—chai never vied for the 36-year-old’s attention. But it wasn’t until a fleeting holiday to the picturesque BR Hills of Karnataka in 2011 that he chose to professionally pursue what made his palate happy. During his trip he met Ganesh, the one-man army behind the Watapi Estate plantation—not only is it known for its aromatic brew, but also its wildlife sanctuary and 600-year-old Biligiri Ranga temple. “Single-estate coffee culture, organic farming without fences, flowing water bodies, and the ethics with which the beans were harvested there made me realise that there were many conscious farmers in India and I wanted to sell their produce,” says Ross, who started The Indian Bean one year later. Now, he spends his time roasting small batches of his offerings from Andhra Pradesh, Coorg, Chikmagalur, and BR Hills in Karnataka, and Kodaikanal in Tamil Nadu.

As one of the forerunners in the artisanal coffee movement, Ross takes his responsibility of educating the consumers rather seriously. “Did you know that a good coffee has over 1,000 more tasting notes than wine?” he asks. The spectrum starts with flowery, fruity, herby, nutty, spicy, bitter, salty, sweet, and sour before moving to harsh, mellow, acidic, and bland. And he’s committed that his clientele knows this. To that effect, he had turned his house into a makeshift coffee tasting room, and created ‘how to brew’ tutorials for their website. While he’s working with traditional farmers, he’s moved on from old-school silver packaging, a mainstay in India, to the more modern, US-style, brown paper bags. “Apart from the usual coffee tastings, and a mobile coffee kiosk, we’ve created a reusable cloth filter targeted at instant coffee drinkers.” It’s time to spread the revolution.

Available at The Indian Bean and select retail outlets.

The two things Arshiya Bose is very particular about are the perfect pour-over—coffee made using the old-school method of pouring hot water over a medium to finely ground coffee grind through filters or drippers—and the concept of sustainability. That’s no surprise. Bose is armed with a masters in environment development and a PhD in coffee production and biodiversity conservation from the University of Cambridge. 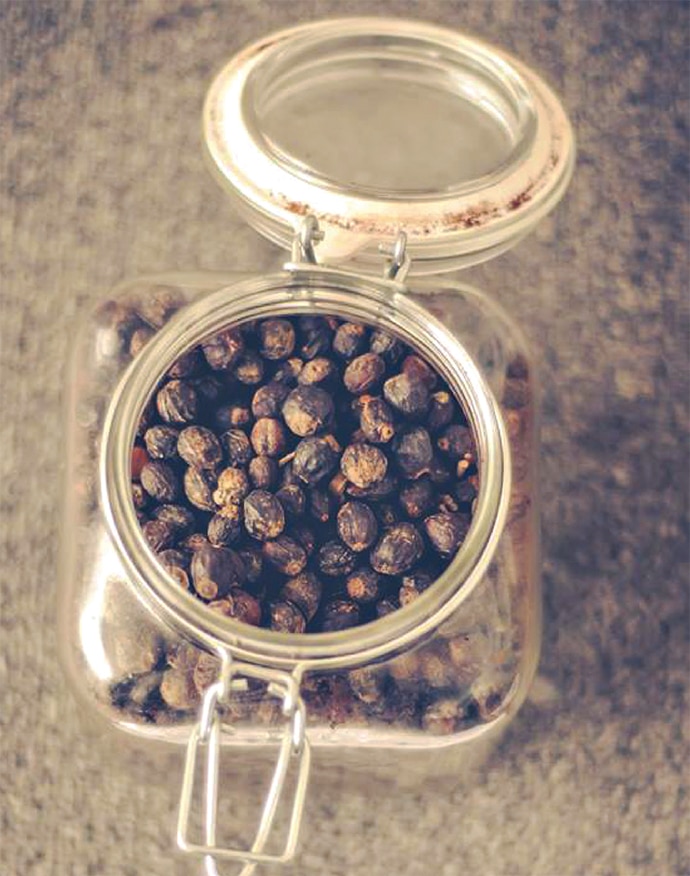 Her first move as an environmental conservationist was to set up the Urveeja (Sanskrit for ‘from the earth’) Conservation Trust. Through the NGO, she explored different ways to support coffee farmers, by conducting surveys, outreach programmes, and environmental campaigns, all in a bid for the growers to adopt biodiversity-friendly farming. Think 100 trees—spanning at least 25 species—per acre, water bodies, no pesticides, ample wildlife, and more. Bose soon realised through research “that just research wasn’t enough and therefore I had to bring about a change through enterprise.” That’s when the 33-year-old decided to market her trained farmers’ produce as Black Baza Coffee Co. 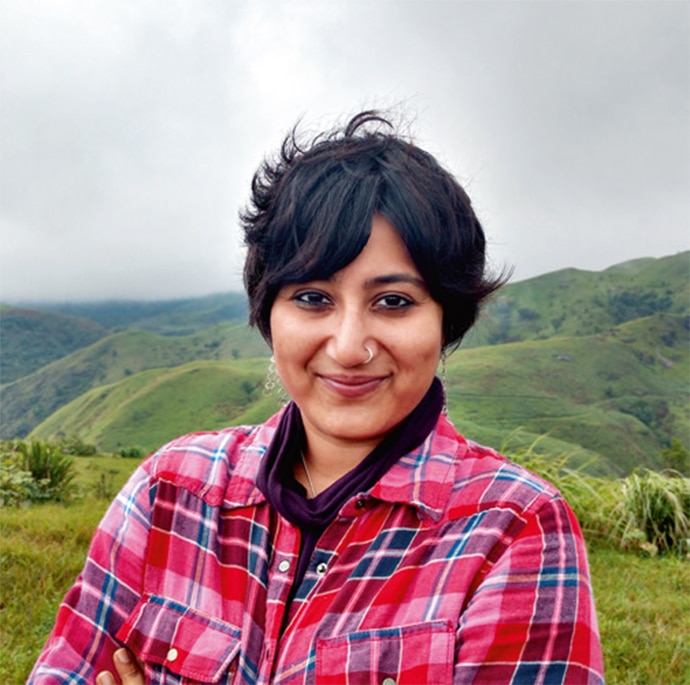 Currently, the year-old brand roasts (twice a week) six grinds—arabica, robusta, and even a filter coffee replacement packed with tasting notes of dark chocolate, walnut, fruit—sourced from 35 farmers in Coorg and the BR Hills of Karnataka, all practicing shade-grown cultivation as supplied under her conservation agreements. “If we aspire to try single-estate, limited edition, or imported coffees from Brazil or Costa Rica, then why not an Indian, biodiversity-friendly coffee grown under the canopy of trees?”

Very few people could tell you that we all have a 16th century sufi saint, Baba Budan, to thank for bringing coffee to India. The Shetty brothers are among them. According to local legend and the owners at Seven Beans, the saint discovered the coffee beverage qahwa while on Haj, and decided to smuggle seven coffee beans out of the Yemeni port of Mocha to grow back at home. He planted the beans in Chikmagalur (now named Baba Budan Hills), caffeine kick-starting the Indian coffee industry and giving this artisanal brand its name. For Abhijit and Advith, construction was the third-generation family business and their 2,000-acre family coffee plantation, spread over four estates, was a weekend getaway for the five siblings. And yet, that changed for the civil engineers in 2012, when they decided to stop working on canals and tunnels to instead turn around their 100-year-old farming legacy into a full-fledged “bean-to-cup” enterprise, with the help from one of Italy’s premier roastmasters, Dr Dante Cagliari.

“Seven Beans Coffee was launched in 2015 only after we understood every stage of production, growing, cultivating, roasting, grinding, and packaging,” recalls Abhijit. According to family stories, it seems the Shettys have been exporting their produce for over a 100 years, but it’s only now that we can try seven unusual gourmet-grade blends created in partnership between Indian coffee planters and Italian roasters. This label’s attention to detail doesn’t begin and end with blending and roasting. On being asked about their logo, which looks more like a medieval crest or coat of arms, Abhijit says, “We wanted the logo to look like it was a coming together of coffee cultivation and roasting,” hence Italian castles and fern-filled Chikmagalur hills. Caffeine kick, anyone?

It was over cups of their single estate, 100 percent, clean arabica coffee three years ago that Tejini Kariappa, along with her mother Nalima and sisters Anusha and Manavi realised, “that we were giving away more coffee as gifts than we sold.” The all-women family-run concern has been producing coffee since 1948, which was sold in the open wholesale market until the ladies decided to rebrand and sell their coffee under the name Halli Berri—Kannada for village and berry—in 2014. 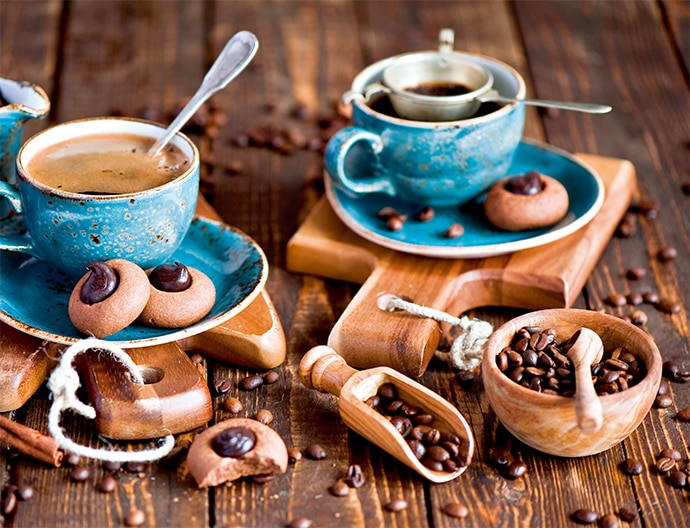 The story, however, started in 2008 after Nalima’s husband, the owner of Halli Berri, passed away, and she decided to open a small coffee shop called Coffee Barn on their family-owned Kambihalli Estate in Chikmagalur, Karnataka. Since then, her three daughters have taken on different roles across the plantation. Tejini, who runs a Mumbai-based PR company called Estrada—managing clients like Masaba, Indian Football League, and Nikhil Thampi—helps her mother with the estate operations, branding, and marketing.

The middle sister, Anusha, a pilot with IndiGo Airlines, is in charge of the ethereal Halli Berri Cottages, an on-estate resort. Meanwhile, Manavi, a MetLife Insurance employee, serves as the brains behind the project from New York. 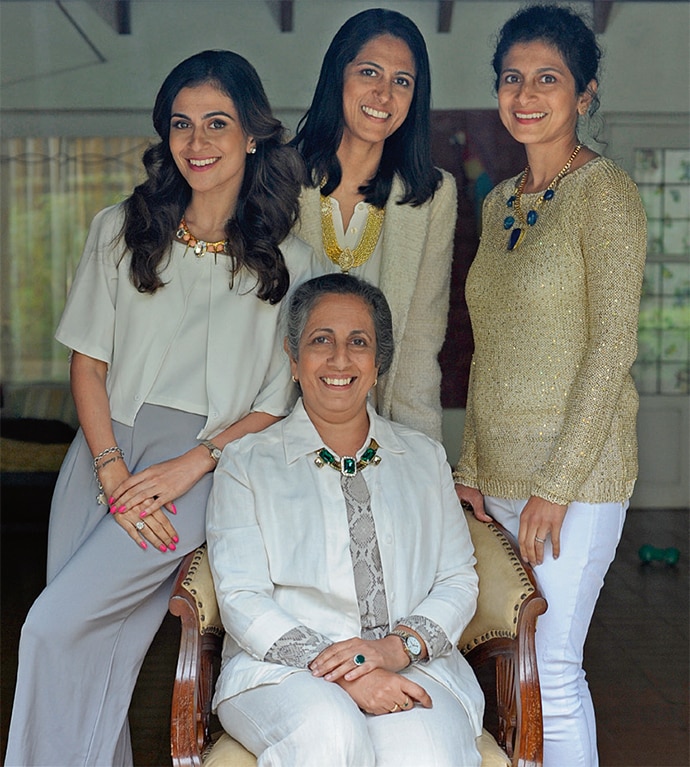 This Rainforest Alliance-certified brand “built on relationships,” in Tejini’s words, aims to provide a quality cup of delicious coffee that is earth conscious, hand-picked, shade-grown, and sustainably farmed, with its very own ecosystem. “We’re not here to be famous. We just want to sell beans that make Indian coffee cool.”

Also read - Need for a comprehensive history of Kohinoor

#Brewers, #Harper's Bazaar, #Coffee, #Valentine's Day
The views and opinions expressed in this article are those of the authors and do not necessarily reflect the official policy or position of DailyO.in or the India Today Group. The writers are solely responsible for any claims arising out of the contents of this article.

Jharna Thakkar is a former chef who is currently a reporter/editor at the Indian Express, Hindustan Times, Vogue, Conde Nast Traveller, Time Out India and the Times of India.