A carefully curated collection of tweets and pictures.

Friends, Indians, countrymen, the moment is here. The day we have all been waiting for has arrived.

Virat Kohli and Anushka Sharma have both tweeted out pictures of their wedding, laying to rest the intense buzz about whether or not they had tied the knot.

Today we have promised each other to be bound in love for ever. We are truly blessed to share the news with you.This beautiful day will be made more special with the love and support of our family of fans & well wishers. Thank you for being such an important part of our journey. pic.twitter.com/aobTUwMNAK

Today we have promised each other to be bound in love forever. We are truly blessed to share the news with you. This beautiful day will be made more special with the love and support of our family of fans & well wishers. Thank you for being such an important part of our journey. pic.twitter.com/Scobdiqk7l

Heartiest congratulations to @AnushkaSharma & @ViratKohli on getting married. Words can't describe how happy we are for you both ???????? #VirushkaWEDDING pic.twitter.com/Jbg5viOxZ2

Twitter has been understandably a-titter over the wedding. The reactions so far seem divided into three broad categories – polite people congratulating the couple, emotional souls struggling with their feelings, and some, who the Bard said are made of sterner stuff, just having fun. Here are some of the reactions:

This gentleman, who is already speculating on the afterlife:

This one, whose cricket connection is strong:

And this user, who raised the bar:

I won't believe it until virat kohli tweet about it ?? Kya patah December fool Ho !! ????#VirushkaWEDDING

This one, who meant business:

@filmfare You better commit SUICIDE????...warna We're gonna find U and KILL U?????? #VirushkaWEDDING

This one who is frustrated wedding guests have forgotten digital India:

It seems no one using Twitter from the guest list who present in virat wedding ceremony no one posting a single pic Damnnnn ????????#VirushkaWEDDING

This one, who remebered the greater good

What else we know

Virushka chose to deprive all Indian resorts of a slice of history and got married in a land far far away – an eminently sensible decision, considering the hysteric buzz we manage to make in India.

They also seem to have used decoys – Anushka’s family on December 7 had flown to Switzerland, reports earlier had suggested the wedding would be held in Milan, but the final venue, in an interesting twist, is Tuscany. 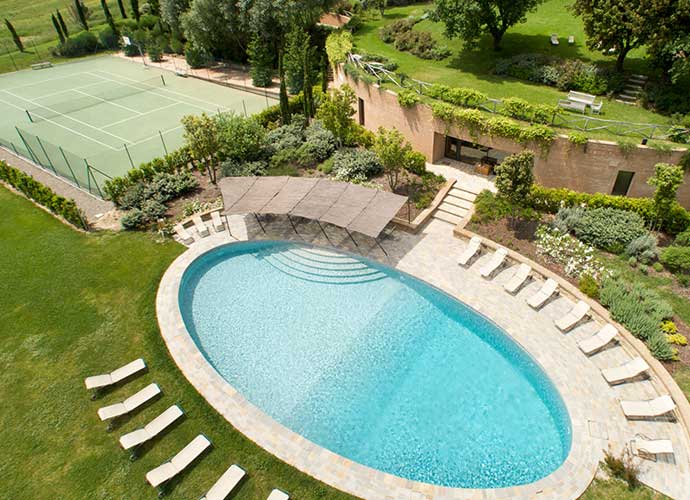 Kohli, we know, likes figures in hundreds. The venue they have selected for the wedding is an 800-year-old restored village called Borgo Finocchieto resort. It is “on the road that the medieval pilgrims took on their way from Canterbury to Rome".

And though Shruti Kakkad of Band Baaja Baaraat fame managed to plan beautiful weddings even on a budget, Anushka seems not to have spared any expense. Another report cited Forbes to state that Borgo Finocchieto was “the second-most expensive holiday rental during Christmas and New Year. The hotel charges Rs 94,83,210 in entirety per week, which translates to Rs 13,54,744 per night.”

According to some reports, Anushka’s father called up some close friends and invited them to the wedding before December 7.

According to other reports, from the film industry, Shah Rukh Khan, Aamir Khan, Aditya Chopra and Band Baaja Baaraat’s director, Maneesh Sharma, were invited. Among cricketers, Sachin Tendulkar and Yuvraj Singh were supposedly there.

“Not many people have been invited, as it is a really small function. Just close ones are invited; Virat’s childhood friends and few of our family members. From cricket fraternity, only Sachin and Yuvraj will be seen, if they make it to the wedding. And of course, Virat’s coach Rajkumar Sharma who once taught him. There were others too, but they can’t make it for the day,” a source close to Kohli was quoted as saying by MensXP.

Slowly, more details will emerge, and surely, the hardworking and obliging media will bring them to us. Till then, we wish the couple the best.