If you have received a WhatsApp message that can be “deemed anti-national”, and deemed by those with very little understanding of either law, or the sociological nuances behind mis/using them, be scared. A precedent has been set in which a wrongful arrest of a man belonging to a minority religion happened over a WhatsApp message that he received, and not forwarded, or even created. This happened in Chennai, and mercifully, the district magistrate let him go citing lack of evidence to show antinational activities.

Such is the state of affairs in India.

According to a report in the Indian Express, 36-year-old Tadikala Akbar Saleem was arrested at Chennai airport on July 15, after his friend, who was en route from Dubai, was found to have exceeded gold carrying baggage allowance. Saleem, from Kadappa, Andhra Pradesh, was “booked on sedition charges for a random audio message he had received on WhatsApp, which was deemed antinational”, according to the report.

“The sedition case was registered by Chennai airport police after the man — Tadikala Akbar Saleem — was taken into custody by the air intelligence unit of the Customs department, which is under the Union home ministry. The incident took place on Saturday, and air intelligence is learnt to have referred the case to Chennai airport police on Sunday, with a warning that it carried 'anti-national' content. An FIR was registered and Saleem was produced before the magistrate on Monday, an inspector from airport police station said.”

Saleem was taken into custody by the air intelligence unit of the customs department, that comes under the Union ministry of home affairs. Now why was Saleem’s phone searched at all? It was a “routine” affair because it was suspected that having a Muslim friend hailing from Dubai and having a Muslim name himself warranted such invasive actions. A “smuggling ring” was suspected and in a country where gold is hoarded, is obsessed over, where the government itself has put a minor GST of mere three per cent on gold, that connection itself becomes a reason for the encroachment into someone’s privacy, as signified by his phone and its contents. 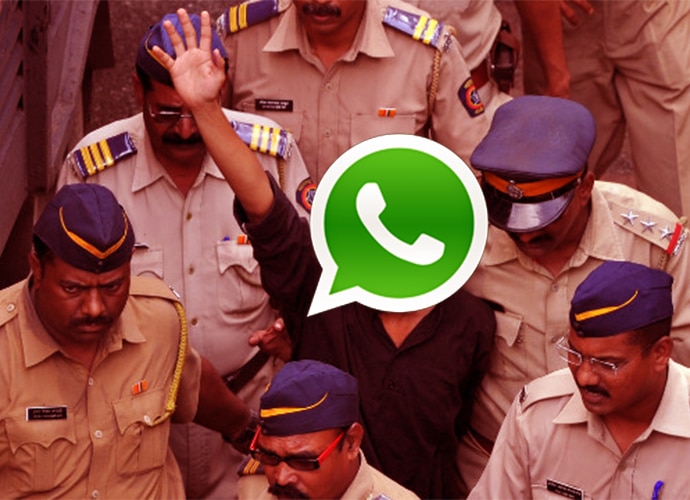 Abysmally enough, the humiliation doesn’t stop at Saleem’s phone being searched. The contents of his WhatsApp – particularly the picture of a woman stomping the Quran, and an audio message asking Muslims to congregate at Delhi’s Jama Masjid to protest the denigration of the Holy Book – become searched items. Then, it’s the latter that is “deemed antinational” even though there is no date and time designated for such a gathering, there’s no violence attached to the message, and there’s practically no forwarding contact given as part of the audio message.

How’s it Saleem’s fault if he has received the message? How can we stop others from sending us messages, unless we block them? How are we to block our friends, they their friends? How’s it possible to verify every fake or innocuous message before receiving them? Why is this being conflated with those maliciously creating, generating and circulating fake news with the intention of riling up communal harmony, of upsetting the country’s delicately secular fabric?

There in lies legal nuance.  A broadstroke and utterly misusable law, draconian in its colonial origin, Section 124A of the Indian Penal Code, or sedition, is prone to being used by the majoritarian authorities to unleash terror on vulnerable people from the minority communities. This is exactly what happened in the case of Akbar Saleem.

The alleged “anti-national” audio message was about Muslims being called for a show of strength at Jantar Mantar. It apparently was made in the name of “Maulana  (Syed) Asad Madani” of Jamiat Uleme-e-Hind, an Islamic body from Malaysia. How’s congregating in the name of religion a crime, when that’s exactly what is happening all over India, only it’s the Bajrang Dal, the Vishwa Hindu Parishad, the Hindu Mahasabha, and the Rashtriya Swayamsevak Sangh doing it in the name of Hinduism. Isn’t this hypocrisy of the highest order, and isn’t law being unfairly being used to weaponise that very majoritarian hypocrisy?

According to The Wire, an officer related to the case and filing of the FIR against Saleem, said:

“Of course this is suspicious. Sedition is anything that instigates communal violence and disharmony. You know, what they want to do is teach a lesson to other religions. That’s what they are trying to say. Why do they want to assemble in a group? It is to go against the government. It is anti-national.”

This is dangerous looseness of legal interpretation and enforcing of law where it doesn’t apply. While some like Shashi Tharoor are trying to get the sedition law read down or struck off from the IPC, there are those, particularly in the ruling dispensation in the Centre now, who want to reinvigorate sedition and apply it left, right and centre.

In fact, the BJP vice-presidential nominee M Venkaiah Naidu was quoted telling India Today that the government is mulling giving sedition law a new lease of life to push a leash on what he called the “azadi gang”.

Whose speech would be deemed seditious, and when? As it happens, a WhatsApp text on which the receiver has no control, can become a reason for his/her harassment if s/he belongs to a minority community or the oppressed classes.

The menace of fake news had prompted judges in April this year to rule that a WhatsApp group admin can be arrested if his/her group circulates fake news. Now defining what constitutes misleading information with the intention to malign or harm others from a different community is such a loose and nebulous thing in the first place. Plus, given the electronic medium, the explosion of Photoshop and other methods to tweak photos and images and texts, the smartphone becoming the most ordinary item of possession – differentiating the real from the fake is not only a tough job, it’s also a slippery slope.

Receiving a WhatsApp message – real or fake – cannot be a crime in a democratic society. In the age of data and digital lives, people’s online avatar’s matter as much, it’s precisely for the right to dignity, liberty and privacy of our digital versions that a number of cases are being heard in the Supreme Court as we speak. Let’s not jump the gun and adopt regressive policies in the name of nationalism, real or imagined.