It took one heatwave — just one — to kill about 34 per cent of the spectacled flying foxes in Australia. Shocked? Wait. It is not over yet.

All the animals — also known as the spectacled fruit bats — reportedly died in two days.

Before the heat wave last November, Australia had an estimated 75,000 spectacled flying foxes— mostly in the northeast state of Queensland — according to government-backed statistics.

Researchers from Western Sydney University finalised their conclusion earlier this month that about 23,000 spectacled flying foxes died in the event on 26 and 27 November.

In their habitat, the temperature typically tops out at about 28 degree Celsius in November. However, the Australian Bureau of Land Management noted that 2018 was the fifth hottest year on record for Queensland with temperatures exceeding 42 degree Celsius. According to scientists in Australia, the bats weren’t able to survive record-breaking heat in temperatures over two days in November — and one-third of the continent-nation's spectacled flying foxes were wiped out.

According to media reports, locals saw bats toppling from trees into backyards, swimming pools and other locations like Cairns — a city in Far North Queensland. One can only imagine the dreadful bleaching of the Great Barrier Reef owing to the heat wave— Cairns is considered the gateway to Australia's Great Barrier Reef. 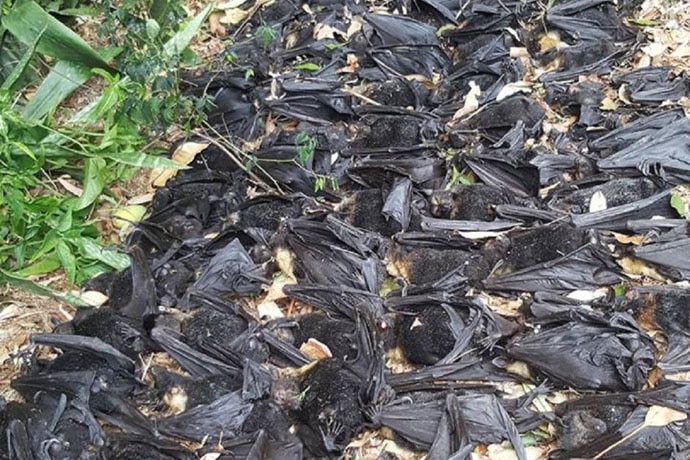 Scores of dead flying foxes lined up on the ground in a backyard after an extreme heatwave. (Source: Facebook/Lisa Eagleton)

Spectacled flying foxes are far from the noisy pets they are portrayed to be.

Once considered abundant in the region, their numbers have significantly dwindled in the past 50 years and are now classified as ‘Vulnerable’ under the Australian Federal Government’s Environment Protection and Biodiversity Conservation Act 1999 (the EPBC Act). Declines in the populations of these fuzzy little herbivores will have significant environmental ramifications as they spread seeds and pollinate native trees.

The spectacled fruit bats —bearing marking around their eyes akin to spectacles — are endemic to Australia.

In an interview with BBC, Dr Justin Welbergen, the ecologist from Western Sydney University who led the count, said that the fruit bats "the canaries in the coal mine for climate change."

Only the fruit bats?

No, sir. The damage goes way beyond.

About 10,000 black flying foxes, another bat species, died during the same two-day period.  "This sort of event has not happened in Australia this far north since European settlement," says Dr Welbergen, who is also the president of the Australasian Bat Society, a not-for-profit conservation group.

“These extreme heat events are a very serious and ongoing issue for the conservation and management of flying-foxes. This issue is set to escalate under climate change, which does not bode well for flying-foxes and other wildlife in Australia and beyond”, he adds. 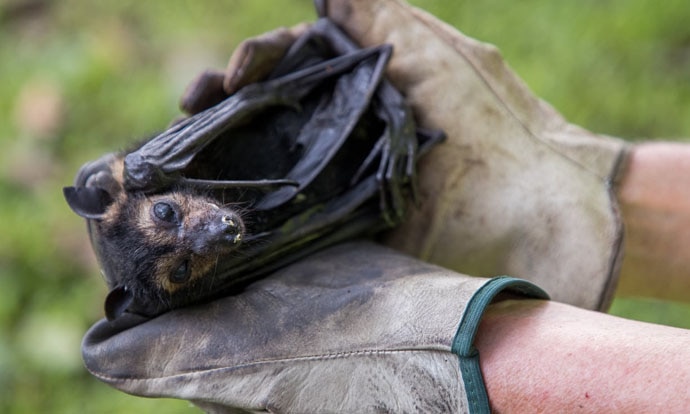 A spectacled flying fox — one of the many thousands that perished in the heatwave. (Source: Marc Mccormack/EPA)

The climate has not changed just for the bats — with temperature in Cairns touching a record 42.6 degrees Celsius — the previous high, 37.2 degrees Celsius was set in 1900 —scientists have predicted that it would precipitate a coral die-off in the Great Barrier Reef later this year.

According to reports, over 130 bushfires burned across Australia last November — with thousands of residents being evacuated and schools closed — a counterpart to the California wildfires in the US last spring and fall.

Not the last collateral damage

Clearly, the flying foxes in Australia are not the first collateral damage to climate change.

However, with such high casualty, let there be no trace of doubt that with climate change shaking the precariously balanced fragile ecosystem, the day is not too far when the human race will collapse like a house of cards.

It is time our political leaders wake up and stop calling climate change a hoax or denial stories of how "climate has not changed. We have changed. Our habits have changed."

It is time we changed our thoughts and re-evaluated our plan of action.