Why plastic is a more serious threat than atom bomb

The discovery of plastic has proved to be more dangerous to mankind than the atomic bomb itself. It is thus not surprising — but definitely commendable — that India has chosen "Beat Plastic Pollution" as the theme for World Environment Day 2018. Given the colossal harm that plastic can do to us, it is an issue that requires urgent attention. Plastic planet: There are 500 times more pieces of microplastic in the sea than there are stars in our galaxy.

World Environment Day is the single-largest celebration of our environment each year. However, given the way we have treated the environment, there isn't really much left to be celebrated.

A report published in The Independent claims there are 500 times more pieces of microplastic in the sea than there are stars in our galaxy and by 2050 it is estimated there will be more plastic than fish.

The event gives us an opportunity to reflect upon how we can make changes in our everyday lives to reduce the heavy burden of plastic pollution on our natural places, our wildlife - and our own health.

While plastic has many valuable uses, we have become over reliant on single-use or disposable plastic — with grave consequences for the environment.

Looking to #BeatPlasticPollution on #WorldEnvironmentDay? Here's how you can take action for our planet ???????????? https://t.co/R9UemxB2zL pic.twitter.com/Wi01Kk6iCg

It is hardly surprising that we have overused and abused plastic. Plastic is cheap, it is durable and it can be turned into so many shapes and brought into so many uses that we just go on buying and using more of it.

It has proved so useful to humans that since the 1950s, we have produced an estimated 8.3 billion metric tonnes of the stuff.

Shockingly, about 79 per cent of the plastic produced over the last 70 years has been thrown away, either into landfill sites or into the general environment. Just nine per cent is recycled with the rest incinerated.

Scientists have warned that this reckless dumping of plastic is an "uncontrolled experiment" on planet earth.

Around the world, one million plastic drinking bottles are purchased every minute. Every year we use up to five trillion disposable plastic bags. In total, 50 per cent of the plastic we use is single use, which means we use it and throw it. The only problem with this — it is non-biodegradble. So it just stays in the environment forcing us and the other life forms such as animals and fishes to become victims of its toxicity.

It is neither possible nor desirable to remove all plastics from society. However, the realisation from consumers and policymakers that urgent action to stop the flow of disposable plastics is needed is growing, and alternatives can have a significant role in reducing our dependence.

Concern over plastic waste has been rising primarily on two counts. First, it can contain hazardous chemicals; two, it also attracts and concentrates other chemicals.

In 2016, the Plastic Oceans Foundation warned that plastic should be considered "toxic" if it gets into the natural environment because of its ability to attract poisonous chemicals "like a magnet" .

The foundation said: "Evidence clearly shows that plastics contain or are formulated with chemicals that are known to be toxic, such as phthalates, and bisphenol A, and which cause a broad range of effects including critical diseases and health conditions.

"Plastic also attracts chemicals 'like a magnet' the moment it enters the ocean, as well as causing physical harm to marine life."

In 2017, the National Green Tribunal announced a ban on plastic "less than 50 microns" . The crackdown that followed in Delhi resulted in the collection of about 9,000kg of plastic. And then came the bigger problem, the agencies just did not know what to do with the plastic that was collected. And that is the bigger problem — once created, we can't wish plastic away from our environment. 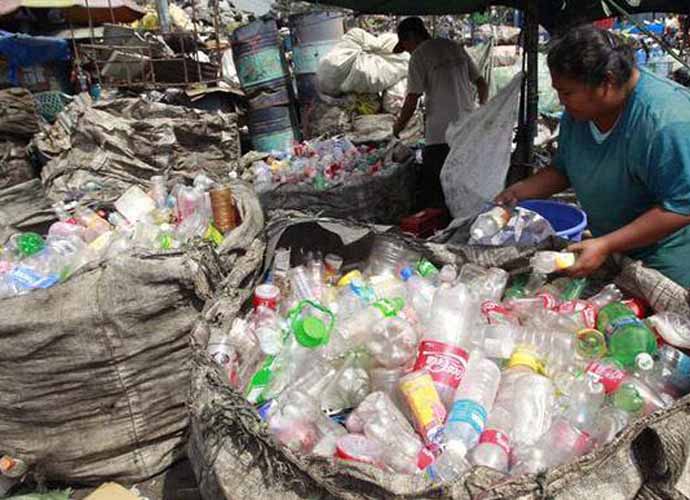 Choking hazard: We are mindless to the environmental cost of the plastic we throw around.

This problem is so alarming that paleontologist, Jan Zalasiewicz, said that if the plastic wastes will be transformed into a cling wrap, it will be enough to cover the globe.

A random conversation with a local grocer or vegetable vendor on the use of plastic can give us an idea about just why the problem has assumed monumental proportions.

While the cost of plastic carry bags has risen, grocers and vendors are forced to use it because consumers refuse to buy stuff without a plastic bag. Any grocer would tell you that people sometimes insist on being given a plastic bag to carry even packets of chips that are anyway plastic. Vegetable vendors say people get angry if two or three types of vegetables are handed to them in the same packet. They insist on separate packets for different vegetables.

While we gulp down bottle after bottle of health or refreshing drinks and throw the bottles away, we are often mindless to the environmental cost of it. Consumers can do a lot by forcing companies to be more mindful of the environment while packaging perishable items. But the fight is tough because the consumer is yet to wake up to the magnitude of the problem, to care enough to act.

Even a straw served with our drinks is plastic. Some of us use it and throw it, some of us don't even use and just throw it. But hardly do we care to tell the shopkeeper or waiter to not give it in the first place. A straw may seem like a small piece of plastic but if the 7.8 billion people who inhabit this planet were to throw a straw each on an average every day, we can only imagine what we are leaving behind. A straw is an example of the mindless use of plastic, there are many many more such plastic items that we add to the environment daily.

Recycle and reuse of the material are a must but it will all begin with a sense of awareness that reckless use of plastic can cost us dear. Behavioural changes are the need of the hour because it not the responsibility of the vendor or grocer to stop us from using plastic, the onus is on each one of us because the cost is for each one of us to pay.