DailyOh! Lives are longer by 10 years, but it's not all healthy, to how much food you can eat

How long you live depends on which state you are from.

Our life expectancy has risen by 10 years but what age we will die at depends on which state we are from. At the two extremes are Kerala and Uttar Pradesh. Keralites are likely to live up to 77.3 years, but people in UP are expected to live 10.4 years less than a Keralite. 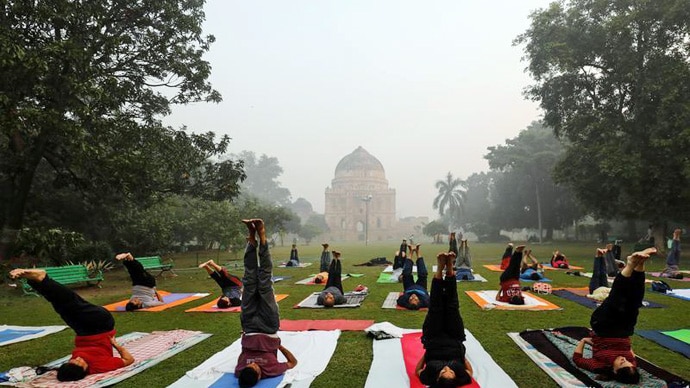 Life expectancy has risen by 10 years but what age we will die at depends on which state we are from. (Photo: Reuters)

A man in Uttar Pradesh died not because of liquid oxygen but from a bullet fired by local BJP leader Dhirendra Pratap Singh in Ballia. In his defence is BJP MLA from Bairia in Ballia, Surendra Singh. Surendra Singh believes that Dhirendra Singh fired in self-defence.

The shooting came after an argument between Dhirendra and the man who Dhirendra allegedly killed over allotment of ration shops in the village. In the list of eyewitnesses to the case are local police officials, sub-divisional magistrate and the circle officer. All eyewitnesses, to begin with, have been suspended.

#WATCH One person dead after bullets were fired during a meeting called for allotment of shops under govt quota, in Ballia. Devendra Nath, SP Ballia, says, "The incident took place after a clash erupted between two groups during the meeting. Probe on." (Note-abusive language) pic.twitter.com/sLwRgkr9s4

The ration shops, of course, couldn’t be allotted because first the blame had to be allotted. The shops can wait like the shops had waited so long. But food can’t wait when it’s time for food. We are not saying this because today happens to be World Food Day but because food can’t wait any day. In 1945, the Food and Agriculture Organization (FAO) of the United Nations was founded on October 16. World Food Programme (WFP) which got this year’s Nobel Peace Prize for battling hunger, says one in nine people in the world go hungry. Not that the eight other are getting all the nutrients they need.

There are people who die of hunger, but this 23-year-old eat-it-all woman died of this one meal. She actually died while she was having the undigested part of the meal surgically removed from her stomach.

So don’t stuff, but eat your food, because you can’t eat your words.

Food is our Word Of The Day, which you sure can eat. Food come from farms, but the word comes from Germanic word fodjan. You may want it to mean food is jaan but it actually means ‘to feed’. Until 1300, food and meat meant pretty much the same thing like Colgate means toothpaste to many Indian households. That was because people ate meat for most meals. Then diversification began and everything we ate and could eat came to be called food. A lot of what we eat, but are advised not to eat, is called junk. Bunny Chow lies somewhere in between food and junk and which side you take it to, depends on how you make it. It's our Recco for today.

From food, let’s move to fake news. A man, who claims to be a lawyer, has been caught on the wrong side of law. Vibhor Anand has been arrested by Mumbai Police for allegedly levelling false allegations in the Sushant Singh Rajput and Disha Salian death cases.

BJP MP Subramanian Swamy, on his part, wants the Health Ministry to constitute a new medical board to analyse the AIIMS report in Sushant’s death case. Swamy wants this done before the CBI concludes its probe.

Madhya Pradesh CM Shivraj Singh Chouhan, meanwhile, has ordered an inquiry into the Ujjain hooch tragedy in which 14 people have died so far. Actually more could be dead, since 14 bodies have been recovered so far since Wednesday.

Maharashtra Home Minister Anil Deshmukh wants the Narcotics Control Board (NCB) to probe the link between actor Vivek Oberoi and Sandip Ssingh for an alleged drug link. Allegations are that NCB is neither going hard, nor soft on Vivek because he is close to the BJP government.

In the probe that is going on in the Sandalwood drug case, Priyanka Alva was summoned today because her brother Aditya Alva is wanted in the case but has been absconding.

Now, Priyanka Alva is married to actor Vivek Oberoi, whose Mumbai residence was raided yesterday in search of Aditya.

Talking of this marriage, we are reminded of what Prime Minister Narendra Modi said today about the right age to marry for women in India. Modi said the government will decide on the age factor once the concerned committee gives its report.

The ‘right age’, remember, is only for people marrying people of the opposite gender since same-sex couples can’t marry no matter what the age. Not yet, that is.

The committee can decide the right age for heterogeneous couples. But whether you want to attend a wedding, invited or uninvited, in Covid times, is for you to decide.

For us, it is time to say bye.

Also Read: From MUF to People’s Alliance, what are Centre's new challenges in Kashmir?

#Covid-19, #Sushant Singh Rajput, #Ballia, #Worldfoodday
The views and opinions expressed in this article are those of the authors and do not necessarily reflect the official policy or position of DailyO.in or the India Today Group. The writers are solely responsible for any claims arising out of the contents of this article.