World Radio Day: From ‘song requests’ to ‘cricket commentary’ how radio made everything better

On World Radio Day, here's re-visiting the wooden box that once was as essential as roti, kapda and makaan in the middle-class household in India.

A now neglected, almost redundant app on your mobile phones — often in-built, yet the least cared for — radio, was once as essential as roti, kapda and makaan in the middle-class household in India.

The journey of the humble radio in even the last 50 years, going from the most useful to the most useless thing, is baffling. Quite like the Boroline in a Bengali’s earthquake survival kit, it is taken for granted — only to be pulled out when all else has failed.

Like when your Wi-Fi doesn’t connect automatically and you can Netflix and chill no more.

But there was a time when a few things only — and only — worked on the radio:

The enigma that was Jhumritelaiya

Legend has it that Rameshwar Prasad Barnawal, a businessman from Jhumritelaiya, simply wanted to hear his name and the name of the place where he lived in on the radio, and so, would flood Vividh Bharti with song requests. The name ‘Jhumritelaiya’ caught on so fast that others would pretend to be calling from Jhumritelaiya, which led radio jockeys to believe it was a fictional place.

But don’t you just love the sound of that name?

It’s got a nice ring to it.

In the 1960s, Indian cricket introduced Hindi commentary — something that was not only unheard of until then, it was also considered weird. Why would anyone possibly want to listen to cricket — in Hindi?

But there was something about the crest and trough in those voices that made the nation sway with them.

And perhaps opened our minds as to how we would reinvent the classic Englishman's game.

Though this wasn’t the only or even the first song request programme on the radio, it stood out simply because of how it bridged the gap between the soldiers deployed at the borders and us, sitting in our living rooms, both of our ears stuck to the wooden box.

It was an instant dose of nationalism that didn’t need the Republic Day or Independence Day tag to spurt. 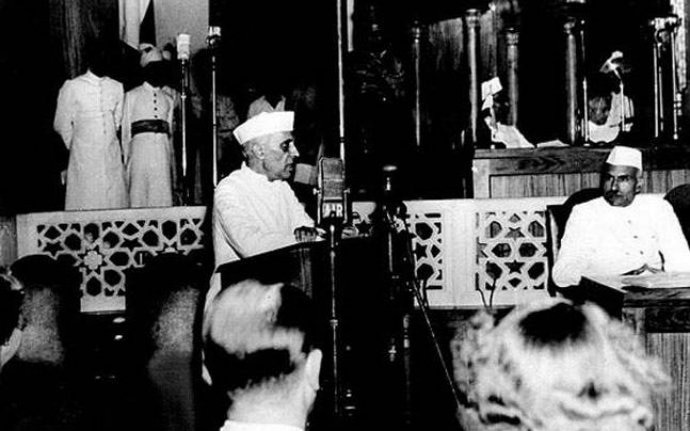 When news wasn't about breaking, but building. (Source: IndiaToday.in/IndiaHistorypic)

“At the stroke of midnight...”

Even in the era of hyperactive breaking news, no one can match the earnestness of an entire nation thronged around a single radio, waiting for that sentence to end.

The radio also gave us the terrible news of the Emergency and then, that of Indira Gandhi’s assassination.

The shock and the fear were all too real, too palpable to forget.