Everyone is confused why Dangal star Zaira Wasim is apologising

'This is an open confession/apology. I know that many people have been offended and displeased by my recent actions or by the people I have recently met.'

16-year-old Zaira Wasim, who played the critically acclaimed role of Geeta Phogat in the Aamir Khan movie Dangal has left people on social media confused, after she put up a long apology on Facebook and Twitter, for allegedly "offending and displeasing people", by her recent actions or by the people she recently met.

This is an open confession/apology. I know that many people have been offended and displeased by my recent actions or by the people I have recently met.

I want to apologise to all those people who I've unintentionally hurt and I want them to know that I understand their sentiments behind it especially considering that what had happened over the past 6 months but I hope people can also understand there are certain circumstances that emerge which one cannot control and I hope people still remember that I'm a just a 16 year old girl and I hope you treat me accordingly. I'm sorry for what I did but it was not a deliberate decision and I really hope people can forgive me.

There are few more things which are very important and I want to clear them as well. The first and foremost thing is that I am being projected as a role model for Kashmiri Youth. I want to make it very clear that I do not want anyone to follow in my footsteps or even consider me as a role model. I'm not proud of what I'm doing and I want everyone, especially the Youth to know that there are real role models out there whether they be in this time or in our history.

To even consider me as a role model would be disgracing them and their disgrace would be OUR DISGRACE! I do not wish to start an argument here, this was a just a mere confession from my end which I really wanted people to know. May Allah bless us and guide us. Wasim’s apology raises a lot of questions. When she says "offended and displeased by my recent actions or by the people I have recently met”, does she refer to Jammu and Kashmir CM Mehbooba Mufti, whom she met on Sunday, January 15? During their meet, Mehbooba Mufti appreciated Zara and her family and spoke to them about the native Kashmiri's interest in creative endeavours. 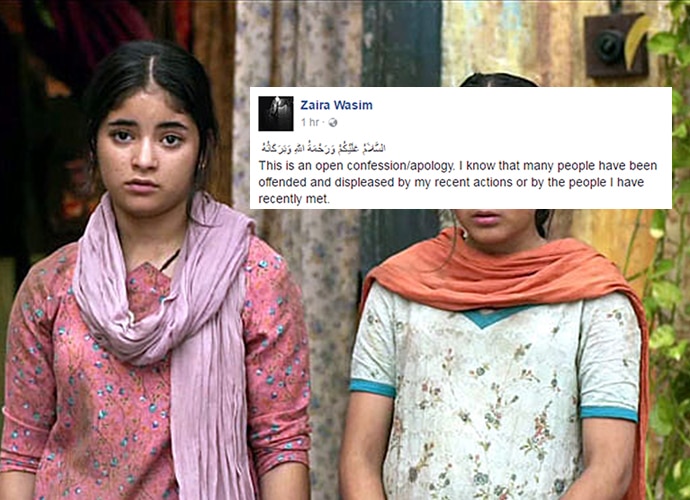 Wasim’s post led to a storm of speculation ranging from whether her account was hacked, or whether she had received threats from militants/separatists in Kashmir. So far, nothing is certain.

Shocking open letter by #Dangal actress @zairawasim apologizing for her work. Was she harassed and threatened by the extremists in #Kashmir? pic.twitter.com/cHl2HhkzA2

What a shame! Is she made to apologise for meeting the CM of her own state? https://t.co/DKi7mOZbgU

Is this document genuine? If yes, this is INSANE! https://t.co/9kDxufYXK2

What the hell? Dangal star @ZairaWasim puts out statement on twitter apologising for what she's done & who she has met, seeks forgiveness: pic.twitter.com/mdKYYcZXLx

Former Jammu and Kashmir chief minister Omar Abdullah, too, has condemend this.

A 16 year old shouldn't be forced to apologise & that too allegedly for meeting @MehboobaMufti. What are we coming to!!!!! https://t.co/MFz3ZKykV1

I've a problem with @MehboobaMufti trying to userp other peoples success to cover up her own failures but why punish/troll people she meets?