DailyOh! Zomato executive denies assault allegations, to the time when the British made fun of Mahatma

The plot in the Mukesh Ambani bomb scare case gathers new twists with each passing day. API Sachin Vaze — the controversial cop who has been facing the heat in the Mansukh Hiran death case — has been transferred to the Special Branch 1 of Mumbai Police from the Mumbai Crime Branch. Where was Vaze before this? The encounter specialist was with the CIU (Crime Intelligence Unit), a prestigious unit of the Mumbai Police department, where he and his team are credited with solving several high-profile cases. Since the Mukesh Ambani bomb scare case is not profile, this case was also given in Vaze’s hands until the allegations by Hiran’s wife surfaced against the cop. So who is in-charge of this high-profile case now? It is Mumbai ACP Nitin Alaknure.

There have been allegations against Vaze in connection with Mansukh Hiran’s suspicious death. A car that was in Hiran’s possession was found parked near Mukesh Ambani’s residence with 20 loose gelatin sticks and a threatening letter, on February 25.

While Vaze battles high-profile allegations, Zomato delivery executive has denied the allegations levelled against him by a Bengaluru woman. 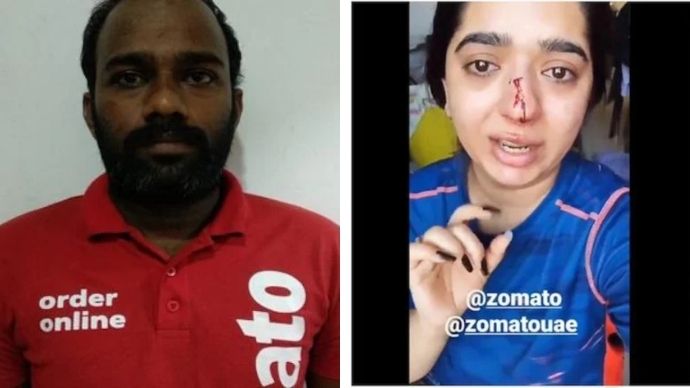 What he said versus what she said. Allegations and counter-allegations between Zomato executive Kamaraj (R) and customer Hitesha Chandranee (L). (Photo: India Today)

The allegations against the executive, Kamaraj, were of physically assaulting the woman, which left her with a broken nose. The woman, Hitesha Chandranee, alleged that Kamaraj "barged" into her home and "attacked" her. Nope, says Kamaraj, counter-alleging that Chandranee first hurled expletives at him and then hurled her chappal (footwear) at him. So how did her nose break? Kamaraj says that he used his hands to defend himself and Chandranee accidentally hit herself with her finger ring on the nose during the altercation, which led to the bleeding.

Zomato founder Deepinder Goyal, meanwhile, has issued a statement on the incident, saying that Zomato is looking at both sides of the incident and helping both the delivery person and the victim.

All this allegation, counter-allegation and denying of the allegation, brings us to our Word of The Day. It is allegation and no prizes for guessing that. Allegation means the action of alleging. Allege means to claim or assert that someone has done something illegal or wrong, typically without proof.

The word ‘allegation’ stems from the Old French word alegacion, which comes from the Latin word allegationem which is the noun of action from past participle stem of allegare or adlegare which means to "send for, bring forth, name or produce in evidence". A charge with no proof is an allegation. Once the allegation has been proved in the court of law, it becomes a conviction.

The world of politics is filled with allegations and counter-allegations. Tamil Nadu Chief Minister Edappadi K Palaniswami denied the allegations of corruption against him today. Who alleged? His arch political rival — DMK. The CM went on to counter-allege that it was the DMK that was riddled with graft accusations. Where did the denying and counter-allegations happen? At the India Today Conclave-South 2021. You can watch the full coverage of the conclave here. Tamil Nadu goes to the polls on April 6, less than a month from today.

In news from the state that is going to polls later this month, BJP leader Suvendu Adhikari filed his nomination this morning from the Nandigram seat. His opponent from the seat? West Bengal Chief Minister and TMC chief, Mamata Banerjee. Union Minister Smriti Irani was campaigning for Adhikari at Nandigram. You can trust Irani with taking jibes. Today, it was at Mamata, saying, "You have done khela (played) with Bengal. You do khela, Modi will do poriborton (reforms).”

That is what Modi will do if BJP wins the elections in West Bengal. We will get to know of that on May 2, when the election results will be announced. But what was PM Modi doing today? Inaugurating the 'Azadi Ka Amrut Mahotsav' event in Gujarat to celebrate 75 years of Independence. 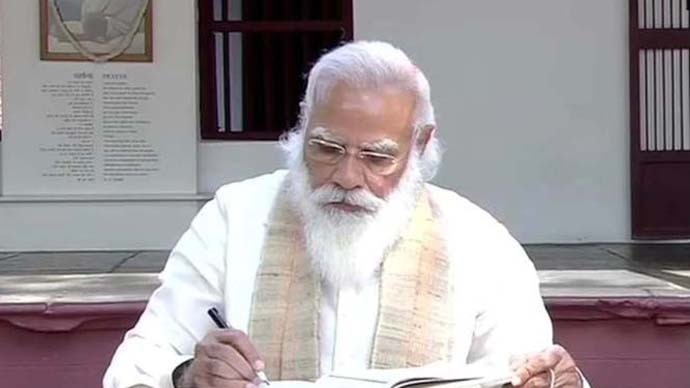 He flagged off a 241-mile march from Sabarmati Ashram in Ahmedabad to Dandi in Gujarat's Navsari district. Incidentally, it was on this day (March 12) that the original Dandi March was led by Mahatma Gandhi in 1930.

While today the historic march of March 1930 has attained iconic status, did you know that 91 years ago, Gandhi's idea of salt as the symbol of protest made him a laughing stock in British and world media? In fact, the prominent British daily The Statesman wrote, "It is difficult not to laugh, and we imagine that will be the mood of most thinking Indians." So uncertain was the world, and even Indian leaders like Jawaharlal Nehru, Sardar Patel and other top Congress leaders were sceptical. Patel even suggested working on the land-revenue boycott. But Gandhi was confident about the idea. He reasoned with the leadership that Salt March will catalyse the Purna Swaraj Movement and will spread the message to the lowest strata. 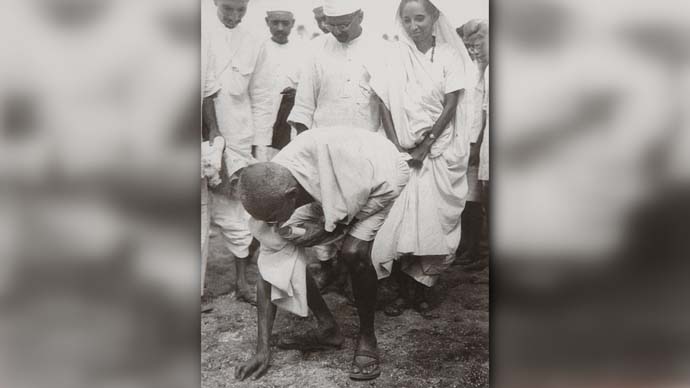 Mahatma Gandhi picking salt on the beach at the end of the Salt March, on April 5, 1930, at Dandi. (Photo: Wikimedia Commons)

He embarked on the march with mere 80 followers before the crowd swelled, and by the time he reached Dandi on April 5, 1930, he had about 60,000 to one lakh followers marching alongside. The rest, as they say, is history. Mahatma made the first lump of salt and dealt a blow to the British Raj. We eventually got our Independence from the British in 1947, 75 years ago. This year, 'Azadi Ka Amrut Mahotsav' will mark an event every week for 75 weeks, till August 15, 2021.

Who else is celebrating today? Janhvi Kapoor and Rajkummar Rao, who have a good reason to celebrate. Their movie Roohi, which hit the theatres yesterday has minted Rs 3.06 crore on the first day of its release.

Roohi is among the first major Bollywood films to have a theatrical release after the government allowed cinema halls to operate att full capacity. It is a horror-comedy produced by Dinesh Vijan and Mrighdeep Singh Lamba — the makers of Shraddha Kapoor and Rajkummar Rao’s smashing hit Stree (2018) — that set a Bollywood precedent in the comedy-horror genre. The film marks the directorial debut of Hardik Mehta.

That gives you something to look forward to the weekend if you are a horror film buff. Or if you are a fan of comedy. However, if neither of these genres appeal to you, we give you the recipe of the no-bake cheesecake. This super-easy dessert is a chill way to welcome the summers.

Speaking of chill, the weather gods gave the capital city a pleasant and cool surprise this morning. Mercury dipped in Delhi-NCR, as the region witnessed rainfall and strong winds in the morning. While the rains were light, the sky turned quite dark. See for yourself: That was the capital in the morning. But what of Pune at night? Not such a happy scenario there, as the city will again see a night curfew from 11 pm to 6 am. Similar curfews have been imposed in other parts of Maharashtra. The reason? Centre’s “worry” and the world’s unending nightmare — the coronavirus. With over 14,000 cases, Maharashtra recorded the highest number of daily coronavirus cases of 2021 on Thursday, taking the state’s active case tally to over one lakh.

The vaccine drive has been actively on. But whether or not you have been inoculated, remember that your best friends against Covid are your mask and sanitiser. And of course, your own prudence.

The prudent leaders of the world — Indian PM Modi, US President Joe Biden, Australian PM Scott Morrison and Japanese PM Yoshihide Suga — who will virtually meet at the QUAD leaders’ summit today — will also be discussing the Covid vaccine. 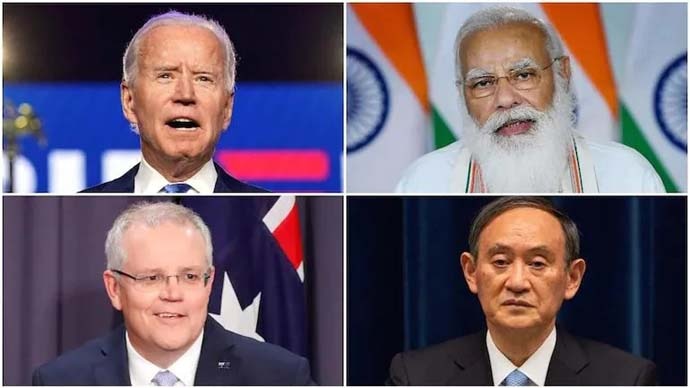 In his address, PM Modi is expected to speak about India's vaccine initiatives and outline the 'Vaccine Maitri' initiative that has reached 67 countries so far. The vaccine initiative will be one of the deliverables that India will focus on, as it will further allow exports to the Indo-Pacific region — a synergy that will help QUAD nations to expedite vaccine delivery.

BCCI president and former India captain Sourav Ganguly, who was recently vaccinated, is travelling to Ahmedabad to attend the first T20I between India and England at the Narendra Modi Stadium today. All the Covid-19-related precautions are in place at the stadium that has opened with only 50 per cent of booking, as per the standard operating procedures (SOPs).

Winning the toss, England captain Eoin Morgan has opted to bowl with five pacers and a lone spinner in Adil Rashid. On the Indian side, the Men In Blue have rested Rohit Sharma, while Shikhar Dhawan and KL Rahul are opening. Axar Patel has joined Washington Sundar and Yuzvendra Chahal as the third spinner. Clearly, a cracker awaits us this evening!

If you are in Ahmedabad and unable to go to the stadium, or if you are elsewhere in the country, you can watch the match live from 7 pm on Star Sports Network. Don’t have a TV, or will be on the move? Fret not. You can still enjoy it on your mobile on the Hotstar app. Or find live updates here.

While Hotstar might be your go-to today, for web series and movies, it is usually Netflix. And sharing Netflix password among friends and family is a given, isn’t it? Not for too long, though. While we all share passwords to divide the subscription cost, the streaming platform does not seem to approve of it and is testing a new feature that might stop users from sharing passwords in the future. So make hay while the sun shines and binge on your favourite movies and series on Netflix this weekend before the party ends.

We will see you on Monday with more news and views.

Have a great weekend.

#Quad summit, #Netflix, #Dandi march, #Suvendu adhikari
The views and opinions expressed in this article are those of the authors and do not necessarily reflect the official policy or position of DailyO.in or the India Today Group. The writers are solely responsible for any claims arising out of the contents of this article.