AAP is the victim: Delhi CM Arvind Kejriwal has no option but to camp in L-G's home

It takes a maverick politician to employ the Gandhian satyagrah to remind the BJP and its L-G that India is still a democracy.

In classic Arvind Kejriwal style, the Delhi chief minister and three senior-most ministers of his Cabinet have been on a sit-in in the waiting room of lieutenant-governor Anil Baijal's residence since Monday evening.

It was arguably the only means of highlighting a historic injustice being done to the people of Delhi and Kejriwal appears to have succeeded in setting the agenda on this issue.

How many people in Delhi, let alone the country, knew that it has been 113 days since any IAS officer serving under the Delhi government has met any of the seven Cabinet ministers of Delhi? Before this protest, no one paid attention to the IAS officers' strike, which is in its fourth month.

When you have an L-G, who encourages officers to continue their strike, and a central government that finds pleasure in harassing members of the Aam Aadmi Party (AAP), it takes a maverick politician like Kejriwal to employ the Gandhian satyagrah and remind the BJP and its L-G that India is still a democracy.

The dharna is an instrument of last resort — when all else has been tried unsuccessfully. Kejriwal has already explained in his press conference that he and his Cabinet members have approached the L-G on eight occasions requesting him to order officers to attend government meetings. On all occasions, the L-G assured the elected ministers that he would convince the officers to work with the government, but refused to issue written orders. 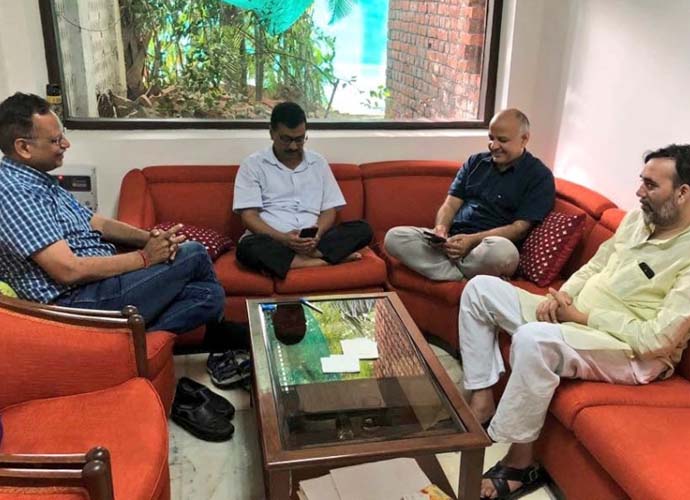 In 2016, the Delhi High Court ruled that the services department of the Delhi government will be under the control of the central government through the L-G. Officers are required to follow directions only from the L-G, and not from elected ministers. It thus appears that the strike cannot be taking place without Baijal's endorsement.

The Delhi government's appeal in the Supreme Court against the Delhi High Court's order was heard by a constitutional bench in 2017, but the apex court has reserved its judgment for over six months. Due to the strike, several key government projects that were being driven by the elected government, have been suffering. The only option before the chief minister was to take the battle to the L-G and force him to order that officers get back to work.

How work has suffered

When the IAS Association initially decided to boycott meetings, ministers began communicating with them through official file notings and letters.

The Transaction of Government of NCT of Delhi Rules, 1993 (TBR), Rule 17 states, "Every Monday or if it is a holiday, on the next working day, the secretary shall submit to the minister-in-charge, a statement showing the particulars of important proposals or matter disposed of in the department by the minister and the secretary and the other officers during the preceding week." Since officers refused to interact with ministers verbally, ministers began using Rule 17 for getting officers to work on important projects.

The AAP ministers clearly underestimated the Indian babu's determination to slack off, especially when they had official sanction from the very top. Shilpa Shinde, director of the Women and Child Department, one of the senior IAS officers in the government, week after week, responded to the Minister's Rule 17 request for a status report, with the following: Nil.

In any other organisation, such an open display of insubordination would merit an immediate termination. But in the Delhi government, such officers are routinely rewarded. Officers, who are marginally better behaved towards AAP ministers, are either transferred or relieved of their charge.

A representative example of how officers are purposefully delaying projects as a part of their boycott is the Signature Bridge. The construction of the bridge, which has gone through multiple revisions in terms of completion date as well as cost estimates, has been stuck in red tape for several months. Each time the ministers of Public Works Department and tourism, Satyendar Jain and Manish Sisodia, have called for a meeting to push for expediting construction, the concerned IAS officers have refused to attend it.

Frustrated with the situation, Sisodia decided to visit the construction site himself and asked the officers to accompany him. Once again, none of the IAS officers turned up. In fact, the two departments have been passing the buck from one to the other and the files concerning the bridge have been moving in circles for many months.

The IAS Association has claimed that the reason IAS officers have boycotted every meeting called by ministers in the AAP government is, "...the CM and ministers have failed to give any assurance regarding safety, security, dignity and respect to the officers, including women officers." This is in reference to the alleged attack on chief secretary Anshu Prakash that supposedly took place at the chief minister's residence in February.

The Delhi Police have already questioned several AAP leaders, including the chief minister, the deputy chief minister, MLAs present during the meeting, among others. For once, the wheels of justice appear to be turning for a resident of Delhi.

This is why the AAP has escalated this protest to one about full statehood for Delhi. The Delhi Assembly passed a resolution demanding that Delhi government be given powers on par with other states. No matter which party one supports, Arvind Kejriwal has been elected to office by the people of Delhi. It is against the spirit of democracy and federalism that he has no powers over his own government's bureaucracy. How will he continue serving the people who elected him if IAS officers continue boycotting the government?

What amazes many is that despite such seemingly insurmountable hurdles, the AAP government has been able to push through a number of critically acclaimed reforms, especially in education and health sectors. If this government is allowed to work like other governments, much more can be achieved.

Post your comment
#Lieutenant Governor, #Anil Baijal, #Arvind Kejriwal, #Aap government
The views and opinions expressed in this article are those of the authors and do not necessarily reflect the official policy or position of DailyO.in or the India Today Group. The writers are solely responsible for any claims arising out of the contents of this article.