Terror calls for a hard martial response. And that should entail no guilt

A misguided interpretation of Hinduism has idolised non-violent retaliation or ahimsa. There is a far greater tradition of martial valour to protect the nation and fight for the just cause.

I rolled out of my bed and took a quick look outside my bedroom window — one can never trust the notorious swing of Chicago weather. We go to bed with a foot of snow on the ground and wake up to a temperature that may feel like a heat wave.

I was happy that there was no fresh snow on my driveway and I did not have to shovel before heading out of my house. Relieved, I went downstairs to the kitchen.

I put all the ingredients for ‘adarak-wali chai’ in a pot to boil on the stove. And, as usual, I picked up my phone and started going through my Twitter feed.

I turned the stove to the lowest heat setting and started to scroll down my phone. There had been a terror attack in Kashmir and several CRPF soldiers were killed.  The casualty count started with 15-20. By the time I headed out to work, it had already reached 40. 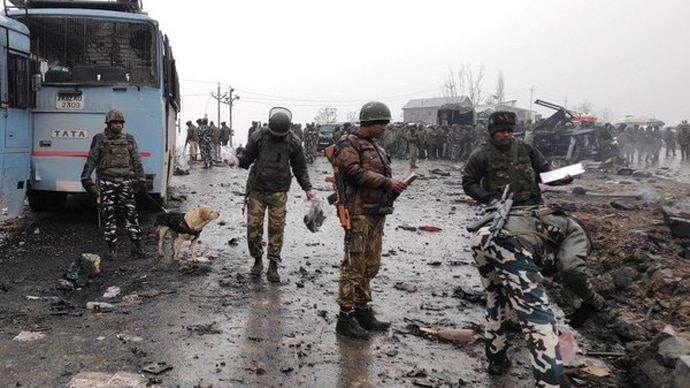 Pulwama Attack: Does this dastardly act merit a response based on kindness to the enemy? (Image: Reuters)

The pictures of blood-soaked bodies were plastered all over social media platforms and outrage was starting to build. The militants of the Islamic jihadist group Jaish-e-Mohammed had claimed responsibility.

This wasn’t the first time — India has a long history of dealing with jihadist excesses. The invasion of many Muslim rulers reportedly saw enslavements and murder. The gore and devastation is well documented, in many cases, in the autobiographies of the invader-rulers themselves as well as in accounts of historians. Koenraad Elst list these sources in his work ‘Was there an Islamic “Genocide” of Hindus’. Similarly, Sitaram Goel’s monumental two-part book (co-authored with Arun Shourie, Harsh Narain, Jay Dubashi, and Ram Swarup) Hindu Temples –What Happened to Them lists temples that were destroyed. Such violence didn't stop in medieval history. Closer in time, excesses during Partition, such as the Direct Action Day in Calcutta, and then, the mass murder and subsequent exodus of Hindus from the Kashmir valley in 1990 speak of a pattern. As recently as in 2017, Hindu pilgrims on the holy Amarnath Yatra were ambushed and killed by jihadi terrorists. 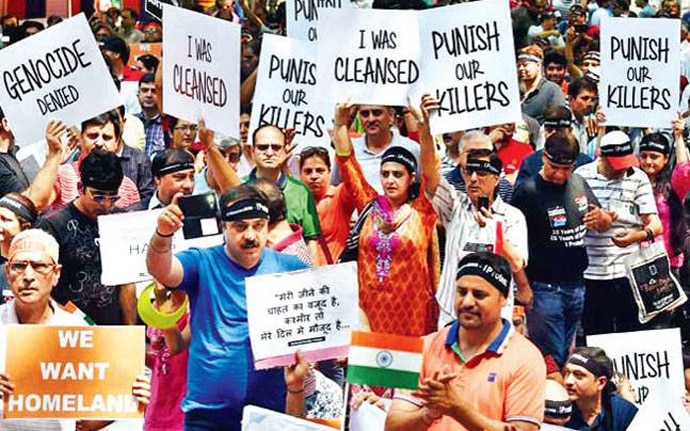 Roots in Kashmir (RIK) has been demanding investigation into the killings of Kashmiri Pandits in the 1990s. (Photo: Reuters)

The Pulwama terror attack on the CRPF convoy was also inspired by religious bigotry. This is borne out by the video recording released by the perpetrator. There were reportedly several religious references in the video including to cows, cow urine, etc. Such references, according to prominent political commentator Tufail Ahmad, are made “as a challenge to Hindu religious practice of worshipping cows.”

Such violence has to some extent numbed the collective psyche of the Indian nation, making us correctly appalled by it but also making us hesitant about responding with apt martial valour. Here, as voices began clamouring soon after Pulwama, for 'non-violent' measures to deal with the terrorists, it was evident that damage had also been done by the Nehruvian-Leftist-Marxist education system that India adopted post-independence.

Generations of Indians, by now, have been fed half-cooked concepts of ‘Ahimsa Paramo Dharma’ and ‘Vasudaiva Kutumbakam’ — without providing any contextual explanation, be it from the Shashtras or Dharma. 'Ahimsa' in Hinduism is actually an ordinary Dharma — contrary to the wrongly assigned popular status of the ultimate or supreme Dharma by the ideologically inclined or the Dharma-illiterate. In fact, ‘Himsa’ can be used to protect (higher) Dharma — to establish this, Lord Krishna’s sermon in the Srimad Bhagwad Gita is intended to encourage Arjuna to fight the great war of the Mahabharata for the sake of Dharma when the ace fighter almost chickened out. Even Lord Rama, the ‘Maryada Purushottam’, waged a war to rescue his beloved wife Sita from the king of Lanka, Ravana, who had abducted her. 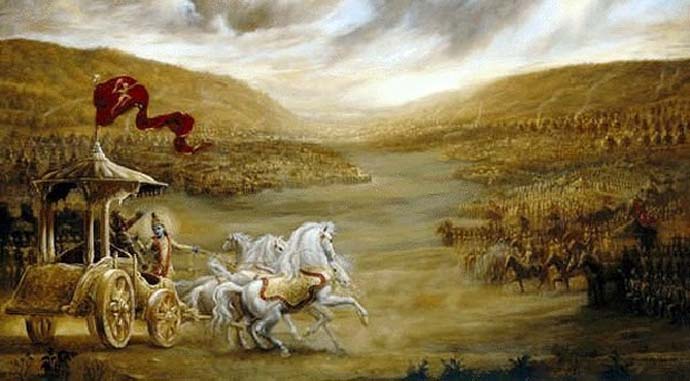 Lord Krishna’s sermon is intended to encourage Arjuna to fight the great war of the Mahabharata — for the sake of Dharma. (Photo: Facebook)

Similarly, Indian pupils are taught inaccurate facts about having won their azaadi (freedom from colonial rule) ‘bina kharag, bina dhaal’ (without any weapons). Gandhiji’s ahimsa and satyagraha were deeply instrumental, no doubt. However, thousands of Indians also took to arms, most notably, the great revolutionaries as well as the soldiers of Netaji Subhash Chandra Bose’s Azad Hind Fauj. The mutinying native soldiers of the British armed forces made their contribution as well to securing azadi, as Dr Bhimrao Ramji Ambedkar in a famous BBC interview explains. Strategic thinker and author Brahma Chellaney writes, “Yet the myth of India uniquely charting and securing its independence through non-violence was propagated by the inheritors of the Raj, the British-trained “brown sahibs”. No objective discourse was encouraged post-1947 on the multiple factors — internal and external — that aided India’s independence”

Under the same education system, Indians from grade school to graduate school are taught about the battles they have lost — but not about the wars they have won.

Economist and author Sanjeev Sanyal, in his talks famously gives the example of Raja Martanda Varma of Travancore. He inflicted a crushing defeat to the Dutch Navy (1741), considered to be the strongest in the world at that time. This part of history is conspicuously absent from most history textbooks in India. Based on his research, Sanyal also talks about how the fake history around Asoka (the Mauryan king) — his nonviolence and his statecraft was invented apparently to legitimise the Nehruvian doctrine of statecraft. This doctrine — many would argue — has severely compromised India’s security apparatuses, internal and external.

As a result of such blatant omissions and commissions of the Indian education system, Indians have developed what linguist and Indologist Kapil Kapoor calls the ‘Hanuman Syndrome’.

When Lord Rama and his army were looking for a volunteer to cross the sea to go to Lanka to look for Sita Jambavanta, the king of the bears, recommended the name of Hanuman. According to the legend, Hanuman had a curse that made him forget his physical capabilities. Jambavanta made Hanuman realize his immense physical prowess and convinced him to fly to Lanka to look for Sita. We all know how Hanuman not only found Sita — but he also razed most of Ravana’s golden city to the ground. Extolling his moral and physical strength, Jambavanta enabled Hanuman to cross the ocean in a leap. (Photo: YouTube Screengrab/ Ramayana by Ramanand Sagar)

India has been a civilisation of knowledge and people have worked hard to protect this knowledge. In the Prithvisukata of Atharvaveda, there is a prayer mantra — “O Mother Earth, destroy those who want to subdue my rashtra (nation) by shastra (weapon) and/or by shastra (knowledge).” In the intellectual sphere, Yaska — the grammarian-philosopher-etymologist (5th or 6th century BC) — defended the Vedas from the materialists who claimed Vedic mantras were meaningless. Adi Shankaracharya intellectually countered the challenges put up to Hinduism by the Buddhists. More recently, Swami Vivekananda, Sri Aurobindo, Ramana Maharshi, all countered challenges from Christianity and/or Western ideology. In the martial sphere, we are all familiar with Kshatriya dharma. The valour of the Rajputs, the Marathas, the Jats, the Ahirs, the Bundelas, etc., is part of everyday lore in India.

India has a long tradition of warrior saints too. Guru Gorakhnath (the protector of holy cows) was one such warrior saint. The modern city of Gorakhpur is named after him. His Natha sampradaya of Yogis and his martial Gorkha (go-raksha) sadhus countered the challengess of Islamic conversion. Naga martial sadhus are also from warrior saint traditions founded by none other than Adi Shankara. There are several akharas of Naga sadhus and they still have their ceremonial fight to have the right to bathe first during the Kumbh. After his father Guru Teg Bahadur was beheaded for resisting religious persecution, the 10th Sikh Guru Gobind Singhji founded the Khalsa panth with the goal of fighting Mughal oppression. Hindus gave one male child from their families to join Guruji’s Khalsa.

With such rich martial traditions, what India needs today is another Jambavanta to make its citizens realise their self, instill a sense of self-confidence, and wake them from their slumber or ambivalence, so they can take on their enemies in one voice and with complete confidence.

Also read: Imran Khan in denial over Pulwama attacks - a waste of videotape and air time

#Shastras, #Vedas, #Non-violence, #Mahatma Gandhi
The views and opinions expressed in this article are those of the authors and do not necessarily reflect the official policy or position of DailyO.in or the India Today Group. The writers are solely responsible for any claims arising out of the contents of this article.