Why peoples' coalitions are uniting against Hindutva — the 'new Peshwai'

The militant mass movement and the ensuing bandh in Maharashtra in the first week of 2018, spearheaded by Dalits and other marginalised groups, carried in their wake a swirl of an assortment of forces aimed variedly to either ride or repel this wave. On the one hand, there are those knitting new unities beyond caste and community, while on the other, there are few aiming to sharpen and consolidate old sectarian divides.

The unifying as well as polarising focal point has been the commemoration of the 200th anniversary of the Battle of Bhima Koregaon that signalled the end of the Peshwa rule at the hands of a British Army contingent comprising a large number of Dalit soldiers.

Remembering the past within the present

The context of their present will impel succeeding generations to remember and memorialise their past in particular ways. Historical events naturally get commemorated differently in different times. The Battle of Bhima Koregaon is a case in point.

The early commemoration of this battle by Mahar community leaders around the turn of the 20th century was witnessed after an 1892 British notification demobilising Mahar troops and halting their recruitment, after the community was excluded from the Army's listing of so-called martial races.

At the time, the commemorative observances mainly highlighted the valour of the Mahar fighters and martyrs. Their prime purpose was to remind the British of the sacrifice and martial prowess of the Mahar soldier and point out the gross injustice meted out to the community by demobilisation, and thus press for resumption of their recruitment into the Army.

The context for Babasaheb Ambedkar's 1927 visit to the battle site was provided by his own historic launch that year of radical mass movements against untouchability. The Bhima Koregaon battle then naturally served as a potent symbol of militant struggle for the annihilation of the caste system. The battle became not only about the bravery of its warriors and their contribution to British victory, but also a remembrance of the smashing of the authority of a most viciously casteist Peshwa state apparatus that brutally inflicted the horrific code of Manu.

In 2018, the context has been created by three and a half years of belligerent Hindutva rule at the Centre and in various states, with its rabid cocktail of blatant communal polarisation, increasing atrocities on Dalits, lynching of minorities, gender violence and bans on inter-community love enforced by ruling party storm troopers, state crackdown on dietary choices and clampdown on universities — all accompanied by a shrill pseudo-nationalist discourse that paints all dissent as anti-national.

The regime’s aggression has also been seen in the rapid, forced implementation of economic and political centralisation measures like GST, Aadhaar and demonetisation, which have favoured big capital and finance to the detriment of small business, farmers and the toiling classes.

Many of these decisions have had their opposite if not equal reactions and the ruling dispensation has been met with fortitude as much as fear. After an initial period of silent disquiet, pockets of opposition have risen from 2015 onwards — first from students and Dalit youth and then from ever-widening sections and strata.

With the ruling regime having similarities with Nazi Germany, more and more people are coming around to identify it as a form of fascism — Hindutva fascism. As resistance grows, coalitions of various sorts are emerging. While most remain focussed on the elections of 2019, there are also those who see the danger as more long term and want to build unities that will forge a front against fascism.

The Bhima Koregaon Shaurya Din Prerana Abhiyan (Bhima Koregaon Day of Valour Inspirational Campaign) — a statewide movement with a march to inspire, the Prerna March, comprised such forces. It culminated at the Elgaar Parishad that was held on December 31, 2017 at Pune's Shaniwar Wada, the historical seat of Peshwa power. The Abhiyan, with retired Supreme Court Justice PB Sawant as its chairperson, besides having a large number of Dalit organisations and leaders like Prakash Ambedkar, also had a number of non-Dalit bodies like the Maratha-based Sambhaji Brigade, OBC caste associations, Muslim-based parties and groupings from the Left.

The focus of the 200th anniversary commemoration was unequivocally on the fight against Brahminical Hindutva fascism. The central slogan of the campaign was "Bhima-Koregaonne dilay dhada; Navi Peshwai masnaath ghaada" (Bhima-Koregaon has shown the way; send the New Peshwai to its grave). By branding the present regime as a fascist “New Peshwai” and drawing a historical parallel with the “Old Peshwai” that was vanquished in 1818, the Abhiyan managed to capture the imagination of large sections who have been yearning to challenge the new regime.

Besides the major push from Dalit youth, the campaign appealed to the Muslim community, and also smaller OBC castes and progressive Maratha organisations.

These were the sections that reacted militantly and spontaneously throughout Maharashtra and even neighbouring states to the January 1 attacks by Hindutva organisations on the defenceless masses proceeding to Bhima Koregaon.

When Prakash Ambedkar gave the call for Maharashtra Bandh on January 2, it received massive support not only from these sections, but also from some students and the working class. The success of the bandh led to more organisations and leaders, even liberals and social democrats, gaining the confidence to lend their support. 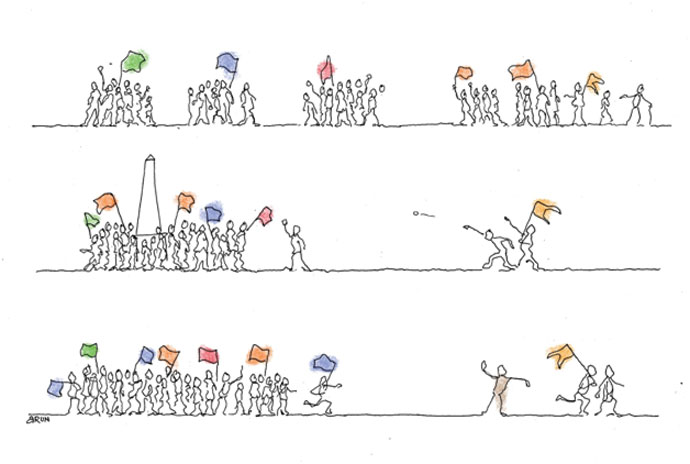 Baji Rao II did not concede without a Bhima Koregaon; it is unlikely the New Peshwai will. Graphic by Arun Ferreira and Vernon Gonsalves

This rising swell of support is being taken seriously by the ruling class and state repression on a mass scale — unprecedented in recent times — has been launched. Combing operations of mohallas and bastis, arrest of thousands of youth, including minors, mass beating and torture, are all intended at pounding the opposition into submission.

But the ruling Sangh parivar well knows that repression is a double-edged sword — it also begets resistance and has the potential to broaden and deepen the opposing forces. The more tried and tested model is that of divide and rule.  Parivar loyalists, Manohar Bhide and Milind Ekbote, who have been accused of masterminding the attacks at Bhima Koregaon are not the only forces at work.

Other saffron outfits are fomenting caste hatred, particularly among Marathas. They seem to be preparing for a caste or communal conflagration, which, if it takes place closer to the elections, could create the Hindu vote consolidation they need.

The possibility of Bhima Koregaon symbolism reinforcing identitarian divides, which has been raised from within the Abhiyan itself by one of its convenors, Anand Teltumbde, cannot be denied. This had been guarded against throughout the campaign with all efforts to make it as inclusive and unifying as possible.

It is perhaps a tribute to whatever success such unifying efforts accomplished that the ruling Hindutva forces, having recognised the danger to themselves, are invoking and provoking identitarian polarisation.

The coming weeks and months will see varied contestations between anti-fascist unifiers and pro-regime polarisers. During these testing times, those who initiated and those who later joined the Bhima Koregaon campaign to bury the New Peshwai will have to rise to the challenge of maintaining and growing the anti-fascist consolidation attained this far.

The immense mass support obtained by the campaign and the bandh has led many ruling class parties and leaders to jump on the bandwagon and announce their support. Congress, NCP, CPM and even NDA partners like Ramdas Athawale have announced “Save Constitution” rallies and caste amity gatherings.

While the demands raised by such mobilisations may not have much that is objectionable in their content, there may be a need to suspect their intent. Such elements have been known to hijack and divert movements in directions far away from their original objectives.

It is by these sections, as also from the state agencies, that the bogey of the “Naxalite leadership” of this movement is being raised. While the revolutionary Left has consistently had an association with and been a source of inspiration for militant anti-caste movements since the times of the Dalit Panther movement, Namantar and Riddles, through the protests against Ramabai firings and Khairlanji killings, they have not been in the leadership.

The leadership of the anti-fascist counter-offensive in the present phase rightly belongs to radical Ambedkarite leaders like Prakash Ambedkar, Jignesh Mevani, Bhim Army's Chandrashekhar Azad and others. It is they who represent the sections who have, so far, most consistently been in the forefront of Dalit battles. It is they who have espoused a vision that transcends community boundaries and best encompasses most of the forces that can today be united.

While strengthening present unities, they will also be forging an alliance with farmers, unions, small business and other sections that see themselves as oppressed by the ruling regime.

A final word about the militancy and violence that has occurred during this movement, particularly during the Maharashtra bandh. A criticism from within the movement, which had similarly been raised earlier against the Bhim Army, is that the militancy is self-defeating.

Some, like Gopal Guru — who upholds the bloody battle of Bhima Koregaon and even links it to another very violent historical episode of those times, the French Revolution — wish to memorialise it in a non-violent  21st century avatar. But history often does not offer such luxuries to the oppressed.

The Peshwa Baji Rao II did not concede without a Bhima Koregaon; it would perhaps be far-fetched to expect the New Peshwai to be different.

Also read: Like Savarkar to Godse, how Indian right wing is killing Gandhi all over again