Why does the BJP need to dig the grave of history after 80 years?

After the Film and Television Institute of India (FTII), Jawaharlal Nehru University (JNU) and Hyderabad Central University (HCU), it’s now the turn of the Aligarh Muslim University to suffer at the hands of the Hindutva activists.

Yes, this is the new India where all universities and institutions are turning into battlefields of divisive politics, compromising on the atmosphere of learning. The ruling party and its allied right wing proxies continue to barge into the internal affairs of the institutes of higher learning.

First, they wanted a RSS shakha at AMU. Then, the BJP MP from Aligarh parliamentary constituency raised a demand to remove a historic portrait of Ali Mohammad Jinnah, which has been there at the union hall since 1938. He expressed his wish in a letter to the Vice-Chancellor of the university, though he is a member of the University Court. He never spoke of it in the Court meetings or in Parliament.

On May 3, the former vice president of India, Hamid Ansari, visited the university to receive the honour of a life-time membership of the AMU students’ union. The honour has historic significance, being conferred on Gandhiji, Jawaharlal Nehru, Sir Syed Ahmad Khan, Mother Teresa, Sir Mohammad Iqbal and Maulana Azad. As the aggressors barged into the campus and reached near the gate of the guest house where Ansari was lodged at, our union leaders met the protesters and called for peace. The activists didn’t relent and finally six of them were detained. Yes, only detained. There was no FIR against them, despite their belligerent attempt to vitiate the university atmosphere.

The AMU Students’ Union led a protest march denouncing the provocative sloganeering and sought action against the miscreants. The students were thrashed and most of the students’ leaders were beaten to pulp, left bleeding and rendered unconscious. The university failed to understand the massive impact of lathicharge by state police against AMU students. The students, however, understand that Jinnah is merely being made a scapegoat; the core issue is to divide India. The Hindu right wing has not only issues with Jinnah, they have earlier killed Gandhi, blamed Nehru for Partition, blackened the statue of Ambedkar, demolished the statue of Azad and glorified Godse and built temples in his name. Thus, the right-wing Hindus have problem with all those who have created India through a historic struggle, in which the ilks of right-wing Hindus, like the RSS and the Hindu Mahasabha, have no role. 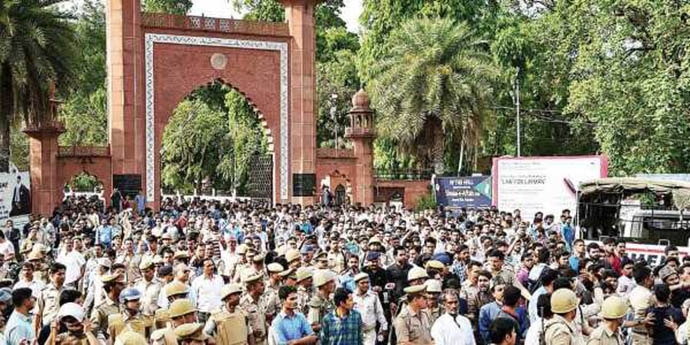 We, the students, understand that Indian Muslims have made a choice to live in the India of Gandhi, Nehru, Azad and Ambedkar. It is the right-wing Hindus who have to make a choice whether they want to live in the secular India. India belongs to those who created a secular republic and not those who want Hindutva and envision a fascist state.

Thus, the issue of Jinnah is an eye-wash. The radical Hindus are trying to create a fascist Hindu state where the history is distorted and the heroes are demons. It is a movement to attack the symbol of Muslims, after demolishing the Babri Masjid.

It is to divide India to create a communal situation as a plank for 2019 parliamentary elections.

Why does the BJP need to dig the grave of history after 80 years? Because, Modi has emerged as someone who can't fulfil promises. From jobs to money in the accounts, from waiving the debts to saving girl children, from bringing back black money to safeguarding the educational institutions, from Kashmir to Kerala, Modi has failed on all fronts.

The Alig fraternity is standing by its history and won't allow the removal of portraits of Jinnah, Gandhi, or for that matter, Ambedkar or Iqbal. They are part of our legacy. AMU must withstand a corruption of historical realities.

We must condemn the state machinery for abuse of power.