Spare us the clichés on 'Mumbai's spirit': Maximum City is dying due to minimum care

Mumbai is famed for never stopping, always carrying on, no matter what. However, what option does it have?

“The tragedy of the poor is that they can afford nothing but self-denial,” wrote Oscar Wilde. As cities grow, we find them crumbling under the weight of 'development' as well as verbosity.

This trend, to my memory, somehow began with the Mumbai bomb blasts in 1993, where the failure of the state in protecting the lives and livelihoods of its citizens was hidden neatly behind loud platitudes and near-ridiculous voices celebrating what was called the 'indomitable spirit of Mumbai'.

As Maximum City then moved from one tragedy to another, year after year, the hollowness of this glamorous slogan started to look more and more ridiculous.

The truth is, terror strikes or collapsing bridges, the city's citizenry is left to fend for itself, to scrape through meagre resources provided by a corrupt bureaucracy. The city came into being out of a conflict with nature, connecting five islands — and we find the conflict continues, with no effort to placate the conquered beast which waits in the darkness for the first opportunity to hit at the living souls inhabiting these spaces.

But no one in power cares.

The spectacular success of the megapolis keeps up appearances, while the regressive politics of the city, stuck somewhere in the last century — the North Indian-South Indian, Marathi-Madrasi narrative — eliminates the possibility of any real accountability on the part of those who rule. 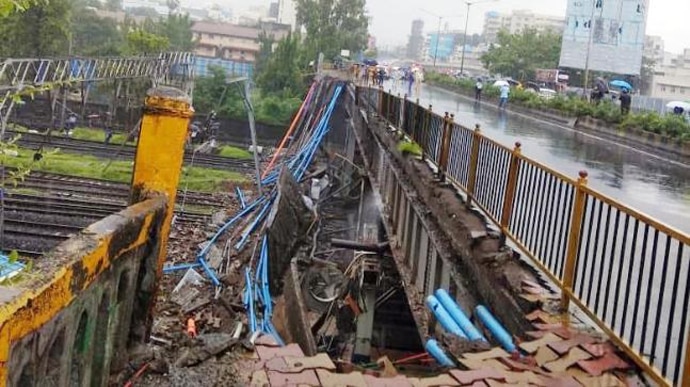 Things Fall Apart: The Andheri bridge after it collapsed.

Every monsoon, as the rains reach the beautiful shores of the city, the rich return to the beautiful terraces in their secured societies, sipping their wines, writing their poetry, listening to their music. The poor, on the other hand, living on the line where the public and private spaces merge, are left to bear the brunt of the capricious weather whose wrath falls with vengeance on this city — every monsoon, with predictable frequency, every year.

The roads get choked, public conveyance comes to a standstill, infrastructure collapses. The argument breaks between which arm of the government holds which part of the debris after each disaster. The leaders squabble. The citizens suffer.

The stench rises, the drains overflow, the corpse of a dead river criss-crossing the city lies in the middle — a stinking reminder of almost a century of administrative apathy.

Commuters spend the night in stationary buses. The sky opens in a day or two.

Mumbai's colonial infrastructure continues to serve its millennials silently, dying every day. Obituaries are published — of the dead city and its dead people in the aftermath of every disaster.

This dance of destruction mocks democracy. This failure of the state in Mumbai is now a pessimistic reality. The choking city doesn’t even bother to ask questions anymore. Burying its dead and cremating collective hope, the city wades through the stench of mendacity which it has learnt to live with.

The 'unstoppable city', without the possibility to pause or to mourn or ponder, keeps moving. It keeps moving because it needs to. What else could it do? Mumbai moves on because Mumbai has no other choice.

Citizens don’t ask, politicians don’t answer. A new-age cosmopolitan city celebrates modernity with bright lights while underneath the dark shadows of the tall skyscrapers, death slides like a serpent, slithering through the dark, congested alleys.

Our newspapers celebrate this 'invincible spirit' of the city.

A city that gasps for breath, wants to die and sleep. But it has no choice. Christopher Morley wrote: “All cities are mad: but the madness is gallant. All cities are beautiful, but the beauty is grim.”

Will we some day stop glorifying the routine tragedy this city faces with a sense of inescapable certainty?

It was Elphinstone last year, today it is Andheri, tomorrow it will be some place else. Death and destruction have become its destiny.

Will we stop drowning the sobs and sighs of this constantly-on-the-move city with hollow sloganeering?

Will we seriously attempt to give a new glimmer of hope to the tired old eyes of this great city overlooking the sea — a city which has run out of tears?

The cancer which affects the city can’t be fixed with a band-aid.

Mumbai needs a comprehensive overhaul. Its British-era infrastructure can’t cope with today’s Mumbai. The past can only take us this far into the future. History is witness that cities which can’t reinvent themselves die slow deaths. We, in India, with the Indus Valley civilisation so close to us, over our long history, have seen cities crumbling under the weight of their own successes.

It is high time we stopped mocking the 'indomitable spirit' of Mumbai — which is nothing but a demonstration of desperation.

This tagline is no excuse for inaction.

If anything, this silent fortitude is a cry for urgent attention — and action.

Post your comment
#Monsoon, #Mumbai Rains, #Andheri bridge collapse
The views and opinions expressed in this article are those of the authors and do not necessarily reflect the official policy or position of DailyO.in or the India Today Group. The writers are solely responsible for any claims arising out of the contents of this article.

Saket Suryesh is based out of Delhi. Works in IT, blogs and writes on Political and social issues.