The BJP won't let the former president of India rest in peace.

Such is the desperation of the RSS for new ideologue constructs that it will not hesitate to hijack the legacy of any historical or contemporary figure that fits their narrative of Hindu nationalism.

In the recent past, the Sangh has brazenly attempted to usurp the legacy of a "Marxist" Bhagat Singh - because of his Arya Samaj ancestry - and showcase him in its hall of fame.

Sure, all parties try to appropriate national icons, but the saffron voices do so with an intellectual dishonesty that would put any make-believe choreographer to shame.

However, unlike Bhagat Singh, former president APJ Abdul Kalam fits snugly into this right-wing template - he represents the most successful appropriation by the saffron Hindus of a Muslim.

By a slender thread hangs the legend of the "Missile Man": A fable that seeks to project that for five years at least, a "Hindu" masquerading as a "Muslim" was the presiding deity at Raisina Hills - a great cultural "conquest" for the Sangh Parivar. 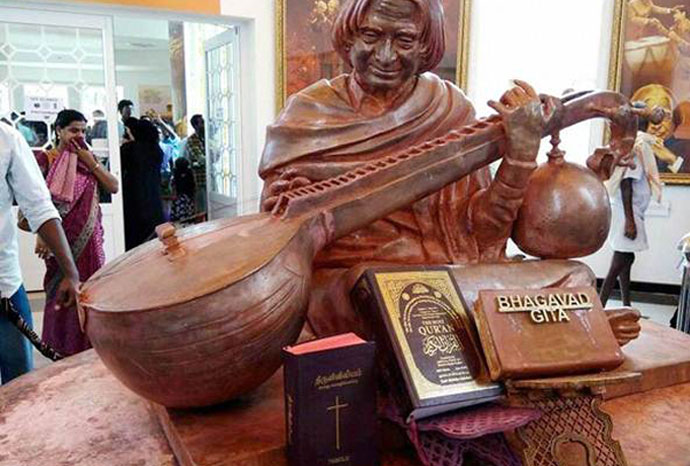 The copies of Bible and Quran were placed along side a wooden piece engraved with the words ‘Bhagavad Gita’ near the statue of APJ Abdul Kalam, at his memorial in Rameswaram, by one of his family members. They were reportedly removed later. (Credit: PTI photo)

The entire edifice rests on the chant that Kalam was far more enamoured of Hinduism than Islam.

By way of anecdotal evidence, the saffron voices harp on his love for Sanskrit; dwell on his childhood friendship with three boys - all from orthodox Brahmin families, including one who became a temple priest; and how events from the Ramayana were his bedtime stories. So were events from the Prophet's life but this fact is glossed over.

They cite his penchant for quoting from the Bhagavad Gita and the Upanishads; highlight the innate preference for vegetarian food; mention his keen interest in Hindustani classical music and expertise on Rudra Veena - the enduring image that Kalam's bust at Rameswaram seeks to reinforce.

And here the analogy gets stretched to the outlandish - the saffron piece de resistance - the fact that he was "not a practicing Muslim".

So, mildly put, a pragmatic Kalam did not allow faith to come in conflict with his checkered career; and he found "all-round acceptance" by allowing his Hindu orientation to subsume his Muslim identity.

The bigot, of course, is delighted at such a construct - of a Muslim president who owes his "liberal" outlook to his Hindu milieu rather than his orthodox upbringing and schooling - underscoring in a big way the intrinsic strength and resilience of Hinduism.

The saffron protagonists also point out with glee how Kalam refused to mix feasting with fasting during Ramzan and that no Iftar parties were hosted during his tenancy at Rashtrapati Bhavan.

But they stick their heads in sand when told that the former president preferred charity (zakat - a Quranic obligation) and the presidential Iftaar budget was set aside for orphanages. Conveniently, they leave out any such unpalatable truths, such is the sophistry and deception.

So, they would rather dwell on what was an unusual deviation for a moderate Muslim - Kalam refusing to be a chief guest for an event organised to mark Prophet Muhammad’s birthday and his former roommate recounting that he had never seen Kalam offering namaz or discussing his Muslim relatives.

Ironically, others scholars too were taken in by this spurious narrative. Islamic scholar Rafiq Zakaria brings out this dichotomy when he says Kalam had kept himself completely aloof from his communal brethren; he refused to mingle with them and "even when invited to participate in their nationalistic activities", he politely declined.

Trying to unravel the mystique, Zakaria argues that there is nothing Muslim about Kalam except the name. “[H]e should not be put in the same category as the two former Muslim presidents, Dr Zakir Husain and Mr Fakruddin Ali Ahmed. Both of them were as great patriots and Indians to the core as Dr Kalam. But they were also Muslims in the real sense of the word; they believed in the tenets of the Quran and faithfully followed the traditions of the Prophet. They worked for the uplift of the Muslims as much as for the progress of India."

However, in all fairness, Kalam did acknowledge in public that he greatly valued the holy book - "which was his constant companion" - and the Hadiths; he also believed in interpreting them in liberal and humanitarian terms.

In his published work, Ignited Minds, Kalam recounts that he had four favourite books - Man, the Unknown by Dr Alexis Carrel, Thiruvalluvar’s Thirukkural, Lillian Eichler Watson’s Light from Many Lamps and the Quran. Only one of these - the Quran - was lying at the side of his bust at Rameswaram when the engraved Bhagavad Gita appeared out of nowhere, igniting a controversy.

Saeed Naqvi, a senior journalist, seeks to transfix Kalam in a different orbit: of Sufi tradition. There are still others who see him as a simple, politically naive and unassuming person who understood rocket science but not politics.

But Kalam's detractors, especially in the Left, are convinced that he diluted his Muslim identity once he became a president because he was indebted to the saffron parivar for hoisting him into the august chair.

Indubitably, the Muslim identity did come into play: one cannot disregard that Kalam had become president two months after the anti-Muslim mayhem in Gujarat - in the first course-correction by the Vajpayee government - ousting other strong probables such as PC Alexander and Krishan Kant.

But Kalam, who was otherwise known for his eloquence, maintained a tactical silence on the Gujarat riots and did not visit the state after his appointment; the Ram mandir was the other prickly issue on which he stayed mum.

A "liberal" and "humanitarian" Kalam could have changed the national narrative had he acknowledged the unsavoury chapters in the country’s history, admitting to the wrongs perpetrated in the past and responding in an appropriate manner, whether by offering apologies or making amends, and by making sure such wrongs are not inflicted again.

RSS sarasanghachalak Mohan Bhagwat had described Kalam in his final tribute as a great visionary who ignited innumerable minds. But Mahesh Sharma, PM Modi's culture minister, gave the game away when he declared that Kalam was a "great nationalist despite being a Muslim" - an outrageous remark for which he was never criticised within the party; rather he was later the beneficiary of Kalam's official bungalow.

That one cannot be both a nationalist and a Muslim and that the two cannot possibly cohabit is the kind of rubbish to which the Sangh subscribes. Having been a jovial bystander in the freedom struggle, the RSS does not have a sense of history.

It is not even aware that the 1857 war of independence was fought under the leadership of the nationalist Muslim king Bahadurshah Zafar.

Belated amends were made by the BJP for Mahesh Sharma's calculated "faux pas" when the name of Aurangzeb Road in Lutyen's Delhi was changed to that "of a great human being who, despite being a Muslim, was such a great nationalist and humanist - APJ Abdul Kalam".

Also read: Why India won't see another Kalam in politics any time soon

Post your comment
#Hindutva, #Muslims, #Hindu right, #BJP-RSS
The views and opinions expressed in this article are those of the authors and do not necessarily reflect the official policy or position of DailyO.in or the India Today Group. The writers are solely responsible for any claims arising out of the contents of this article.