It was his boldness, conviction and courage that won the late PM Vajpayee accolades and admirers who joined the RSS and the Indian Army.

One of my earliest and most vivid memories is watching television as election results were announced on Doordarshan after the general elections of 1996. The Narasimha Rao-led Congress government was widely expected to lose power and I found myself fascinated by the bar graphs and charts that were coloured in, now that I think about it, positively psychedelic colours! For me, the party of choice was the BJP — despite the fact that almost all of the politicians in my extended family owed an allegiance to the Congress. The reason for my choice was Atal Bihari Vajpayee. I remembered an interview that he gave to journalist Rajat Sharma a few months before the elections. He was loquacious, but articulate too and somehow came across as quite avuncular.

In this respect, he was quite unlike the taciturn and morose incumbent Prime Minister.

I also remember listening to his speech on the no-confidence motion — which was the first time that proceedings apart from Zero Hour were telecast on Doordarshan. As it turned out, Vajpayeeji’s eloquence could not win the day on the floor of the House and the BJP government could not last for more than thirteen days in power. What followed were two anodyne years under HK Deve Gowda first and then, Inder Kumar Gujral. In 1998, Atalji was sworn in again, this time at the head of a disparate coalition of seventeen parties, which was quite ironic as he had perhaps apocryphally described the previous United Front Government as a ‘Bhanumati kaa Kunbaa’.Be that as it may, the nuclear tests took place in 1998 and the political and diplomatic trajectory of the subcontinent was altered forever. 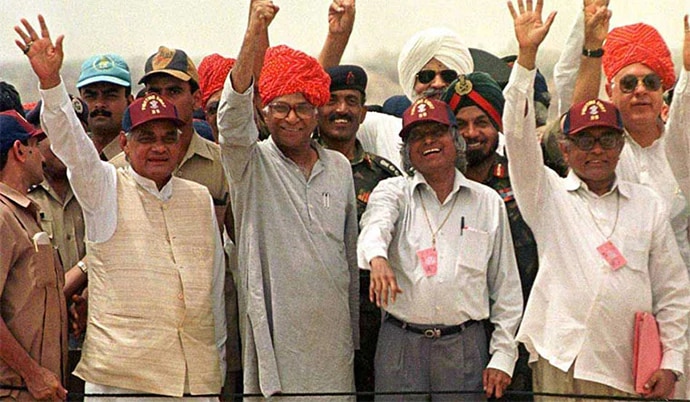 As an eleven-year-old, I did remember a lot of older people lamenting the same and making doomsday predictions about the damage all of this would cause to India’s economy since sanctions were almost inevitably going to follow.

As it turned out, their fears were misplaced and India’s economy progressed fine.

All of us born around the mid-80s and afterwards are children of liberalisation and a consequently stronger Indian economy and polity. Although the darbaari historians of the Congress party like to tell us that the process of economic liberalisation was ushered in by Dr Manmohan Singh, the truth, as attested to by Vinay Sitapati in Half-Lion: How PV Narasimha Rao Transformed India, his biography of PV Narasimha Rao, is that the party and the government both lost their stomach for further economic reforms post-1994. In stark contrast, Atalji stood up to the opposition that emanated from within his own ideological parivar, including the Bhartiya Majdoor Sangh as well as the Swadeshi Jagran Manch, and pressed ahead with economic reforms. When he demitted office in 2004, after a shock defeat in the general elections, which owed primarily to the fickle vicissitudes of regional politics in Andhra Pradesh rather than a dip in the incumbent’s own popularity, the economy was in rude health and the fundamentals were in some ways even better than they are now.

However, the crowning achievement of the Vajpayee years was the victory in Kargil. In many ways, the aforementioned victory was what altered India’s self-image as a nation for good. It literally was a cathartic moment. I remember rifling through the pages of India Today and reading stories about twenty-somethings from ethnic groups that had historically fraught relationships with the Indian Union, including Nagas and even some former ULFA cadres, joining the Indian Army to defend the country on the icy heights of Kargil.

Over the course of six years, despite the fact that there was opposition to peace with Pakistan from within his own party, Atalji reached out to Pakistan thrice. As a matter of fact, the peace process initiated by him was concretised in the form of the eponymous Four-Point Formula towards the end of Pervez Musharraf’s tenure. Even in Jammu and Kashmir, Atalji’s spontaneous invocation of the spirit of ‘Kashmiriyat, Jamhooriyat and Insaniyat’ is remembered fondly.

Although he was not a multiple-term Prime Minister except for in the most technical sense of the phrase, the magnitude of his legacy is quite humongous. Even in terms of infrastructure building, UPA 1 and 2 were both unable to match him.

One in fact wonders how much more he would have achieved if he was not hamstrung by the constraints of alliance politics. However, it would not be an exaggeration to say that it was on the watch of this soft-spoken but firm poet-politician that India finally took its first steps towards carving out its own niche in the comity of nations — and thereby winning a place on the global high table.

History shall remember him quite fondly.

#Diplomacy, #BJP, #Rashtriya Swayamsevak Sangh, #Atal Bihari Vajpayee
The views and opinions expressed in this article are those of the authors and do not necessarily reflect the official policy or position of DailyO.in or the India Today Group. The writers are solely responsible for any claims arising out of the contents of this article.

Author is a lawyer and RSS swayamsevak.