Recently, academic Audrey Trushke posted a detailed thread on how US Senator Tulsi Gabbard has ‘extremist Hindu Right links’, and how ‘militant Hindutva is a tool to oppress minorities in India’.

Tulsi Gabbard has extensive, financial ties with Hindu Right extremist groups. @TheDemocrats, listen up, if you would not accept someone with white supremacist ties running on your ticket, you should not accept Gabbard either. #TulsiGabbard #Hindutva https://t.co/U9op1OkD4M

In another tweet, she brought in a context apparently containing Hitler, Nazism, the 2002 Gujarat riots, etc., to further prove her point.

Alright folks, a little primer on Hindutva or the Hindu Right Wing, to which presidential hopeful Tulsi Gabbard has ties. This is meant for Americans without much, if any, prior knowledge of India. #Hindutva #TulsiGabbard THREAD

Tulsi Gabbard, of course, is the first Hindu woman to run for the post of US president, and clearly, Trushke seems strongly opposed to her candidature. 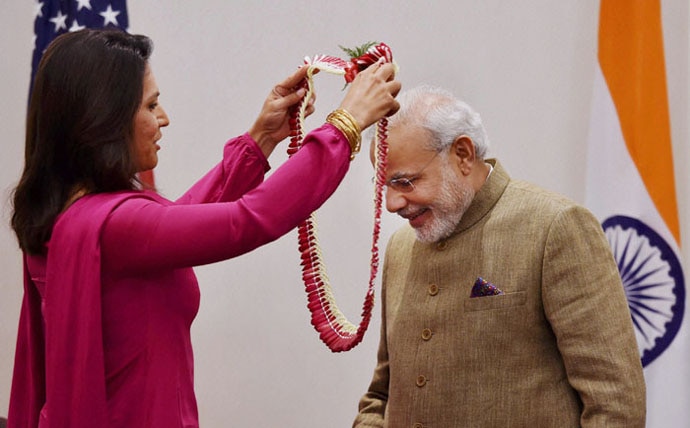 Tulsi Gabbard holds a high opinion of Prime Minister Modi, and has met him in the past. (Photo: PTI)

Now, context, while reading history or indeed, the present, is very important. We cannot judge the actions of a particular person appropriately unless we place him or her in context of the prevailing social customs, their own traditions, practices, threat perceptions, religious rites — and, importantly, family lineage as well.

If you read Trushke’s book on Aurangzeb, you will understand that she has “reassessed” the Mughal emperor on similar lines. Even though Aurangzeb has been termed ‘tyrannical’ by most Indian historians, according to Trushke, Aurangzeb Alamgir is a “severely misunderstood" figure.

Since the publication of her book (in 2017), other historians have opposed her views, by pointing out that her book is an attempt to “whitewash” the deeds of Aurangzeb and no matter how much you consider the context, the fact remains that Emperor Aurangzeb was a bigot.

These views have got support from several scholars, the most prominent among them being William Dalrymple, widely considered to be one of the most authoritative voices on the Mughal period in India.

In fact, in my opinion, Audrey Trushke has earned a name for herself not so much for her ‘scholarly’ books, but by misrepresenting Hindu texts, and more specifically, by furthering her own definition of Hindutva, which she describes as a ‘militant and intolerant idea aiming to make India a Hindu Rashtra (or a country of Hindus only)’.

It is because of her aggressive anti-Hindutva views — as I had argued earlier — that she is now a more popular scholarly figure in the literary circles of India than other renowned names such as William Dalrymple and Shahid Amin, who have been researching India for decades, but have never held a specific ‘anti-Hindu’ view.

In this article, I decided to adopt Audrey’s own research methodology and apply it to try to understand her better — in the same way she tried to understand Emperor Aurangzeb.

Historically speaking, India is going through a very unique phase.

After ruling the country for 70-odd years, the Congress lost power to Narendra Modi of the BJP in a decisive 2014 election, which permanently changed the course of India’s political history.

Modi is projected by some sections of the press as a ‘Hindutva icon’ who supports Hindu ideology. This narrative is not disputed at all. In fact, on the contrary, it is an established fact that a large section of Hindus form Modi’s core vote-bank and see him as somebody who would grant the majority Hindus equal rights and opportunities.

In less than three months, India will have its next General Election, where, despite multiple coalitions popping up, Narendra Modi is still widely touted as the favourite. This, despite the less-than-expected showing in the recent Assembly elections in Rajasthan, Chhattisgarh and Madhya Pradesh, where the BJP lost to the Congress.

Sections of the press have already pointed out that this is the beginning of a ‘resurgent Congress scripting a comeback’ under Rahul Gandhi. A section of the media also projects the Congress as a party which is more ‘sensitive’ towards the minorities. To some, a secular messiah: Certain voices are hailing the rise of the 'liberal' Congress under Rahul Gandhi. (Photo: PTI/file)

One of the narratives that seems to have worked politically against Modi is to associate the BJP (particularly Modi) with ‘militant Hindutva’ — which is supposedly aggressive, intolerant, perverse, authoritative and bases itself on a misinterpreted ideology.

Trushke has been writing on the same subject for years (there are examples here and here) and propagating the same narrative on her social media handles as well.

Coming back to her tweets about Tulsi Gabbard, it is now important to note the context: both Modi and Gabbard are running for the top posts in their countries, and their possible win seems to be a huge cause of concern for Trushke.

Now that it is established that Trushke regularly speaks against Hindutva, branding it as “militant” and “intolerant”, the question is: Why?

She is neither an Indian citizen, nor is she part of a political party. Then why is she trying to propound such a narrative? Why this sustained propaganda against the BJP and Narendra Modi?

As we have understood from Trushke, it is apparently important to understand familial ties and the religious background of a person as well before we evaluate them in full fairness.

Applying the same logic in her case, I first referred to her own website to understand her family background. Neither her website, nor any of the associated academic sites talk about her family.

But here is reportedly the family background of Trushke. She is apparently the daughter-in-law of Senior Pastor Nathan Rehn, who is reportedly a Christian pastor and well-known, it seems, for his evangelism and sermons. The website of the Church where he works in the USA has posted his family picture from Christmas 2013 (attached). Trushke can be seen in the group photo (standing far right). 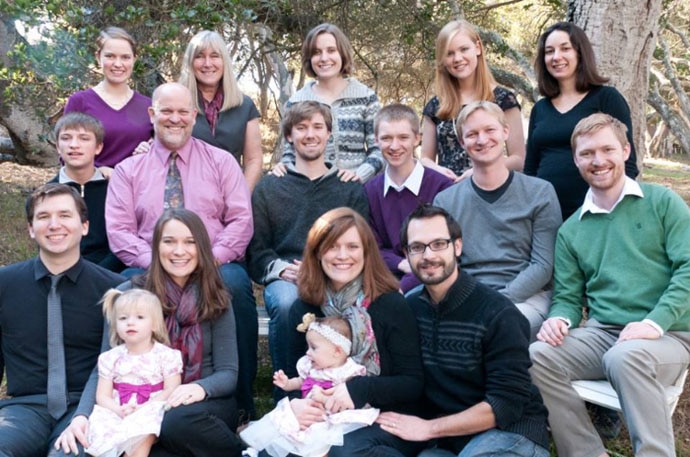 Audrey Trushke standing on the far right. (Picture: Via author)

Next, I visited an online profile of Pastor Nathan, where I found that he had proudly shared his daughter-in-law's works (the post is marked as “public”). 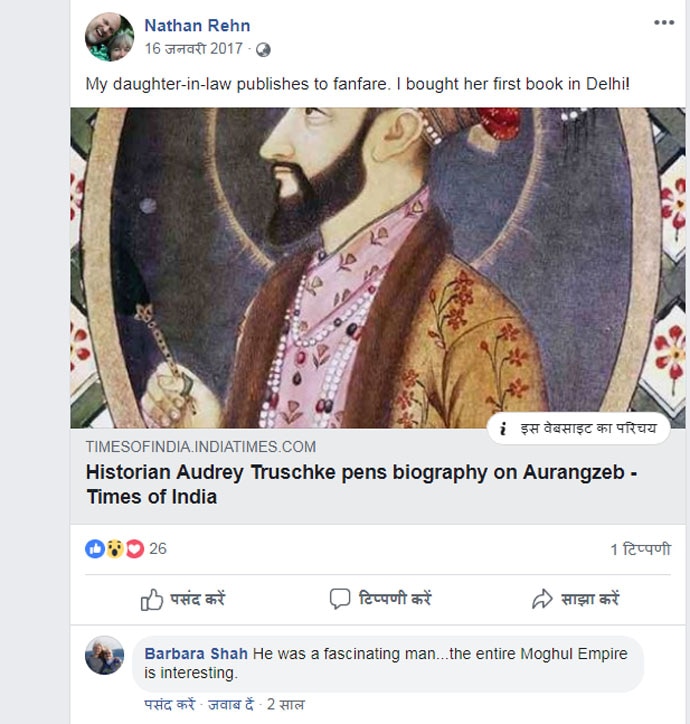 When I dug a bit further, I found that Pastor Nathan was apparently engaged in propagating Christianity and gives regular lectures on the importance of embracing the religion. I also came across this lecture reportedly by Pastor Nathan — which is on the subject, ‘The Problem With Idolatry’.

Listen to the lecture yourself to find out what he seems to think of other religions. Here is the link.

The Problem With Idolatry from First Baptist Monterey on Vimeo.

Pastor Nathan is also apparently the founder of NGO Bless India Movement, which describes itself as “Mobilizing American Christians to win India for Christ.”

However, the operations of the NGO in India seem to have folded up recently, and all the links have been killed, it seems, due to a series of “grave sins” committed by one of its key Indian officials. The site doesn’t say what the “grave sin” was that prompted them to stop the flow of funds to their Indian representative.

I visited the web repository and extracted the earlier page (screenshot attached), where you find a detailed description of Father Nate. The NGO Bless India has apparently shut shop. The exact reasons are not yet known. (Picture: Via author)

It does need to also be put into context that the Narendra Modi-led government has put under watch and come down heavily on foreign-funded NGOs, cancelling the registration of 18,868 NGOs under the Foreign Contribution (Regulation) Act (FCRA). It has also cancelled the FCRA licenses of NGOs for violating its provisions.

So, now we have a contextual picture of a family actively engaged in evangelical work — and at the same time, regularly bashing Hindutva.

So, in my view, Audrey Trushke’s narrative doesn’t pass muster through her own methodology. Put in proper context, as I have tried to do, she would appear to have a stake against the BJP — and particularly Narendra Modi — winning the popular mandate in India again.