By embracing Ayodhya, the BJP gained huge political mileage from a cause the Congress brought to the fore. The Congress should reclaim the Ram Mandir issue, and the votes it has lost on this.

The world’s largest democracy has been facing a "silent" crisis for almost three decades now — the Ram Mandir-Babri Masjid dispute in Ayodhya, a place close to the hearts of the majority population of Hindus in India. Ram ki Paidi, a ghat on the banks of the Sarayu river in Ayodhya. (Credit: Ramnath Bhat/Wikimedia Commons)

While we may feel that we are getting closer to the verdict, the reality differs.

While the Supreme Court is hearing the Ram Mandir-Babri Masjid case, the dispute hasn’t only loomed large, but it appears to be getting more and more distressing with fresh PILs by different sections of people filed to delay the verdict.

The long-drawn-out animosity between the Hindu and Muslim communities must end, and the country must move on to important issues that concern the development of the nation as a whole. The sensitive Ayodhya issue has been tearing apart the social fabric of the country ever since it surfaced. It’s about time we stopped running away from the verdict - it has been dividing the two communities for many years now.

Lord Rama is the Maryada Purushottam for most Hindus. Lord Rama was born in Ayodhya during the Treta Yuga is the gospel on this. It needs no validation. Still, the verdict on his janmabhoomi (place of birth) awaits evidence.

Over the years, there has always been tremendous speculation that the Mughal emperor Babur purportedly destroyed several temples in India and many Islamic structures do stand atop destroyed temple sites. Even then, many ask for 'proof' that there was a pre-existing temple of Lord Ram on the site where the Babri mosque was built.

Well, to me, it doesn’t matter whether a temple was there or not, as long as I truly believe that my Lord Ram was born there. It is owing to this belief that I fully support the verdict in support of a Ram Mandir and will continue to do so.

In 1885, when the Nirmohi Akhara filed a suit in the Faizabad court seeking approval to build a Ram temple on the Ram Chabutra, next to the Babri Masjid, it was more of a local issue. Eventually, it materialised into a national concern.

In the 1980s, the Vishwa Hindu Parishad (VHP) started a campaign to gain access to the Babri Masjid and other establishments that had been purportedly built over Hindu holy places. The movement spread far and wide. But, on December 6,1992, the Babri Masjid was demolished by a mob of kar sevaks. 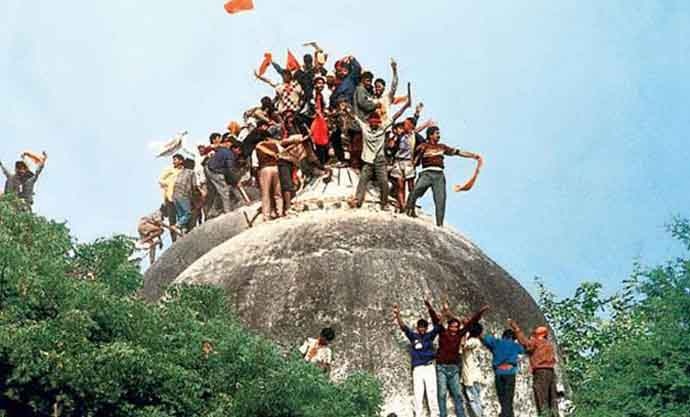 That wounding blow: It has been 25 years since the Babri Masjid was demolished on December 6, 1992. (Credit: India Today)

It was a damaging blow to the pride of secular India.

In the wake of the Babri Masjid demolition, thousands of innocent lives were lost during the ensuing 1992 Bombay riots, and later, the 2002 Gujarat riots.

Given the geography of Indian politics, the Ayodhya dispute never dissipated, resulting in two significant outcomes  — the decimation of the Congress party in Uttar Pradesh and the emergence of the Bharatiya Janata Party (BJP) as a dominant player in the country’s politics.

Later, in a 2010 judgment of the Allahabad High Court, the disputed site was divided into three equal parts among Ram Lalla, the deity, Sunni Central Waqf Board and Nirmohi Akhara. More recently, the Supreme Court is continuing the hearing of 13 appeals filed against the 2010 judgment.

Although the BJP largely resorted to politics over “Ram”, “Ram Rajya” and “Ram Mandir” since its rise, it never did justice to any of them.

Today, Narendra Modi has taken the Ayodhya dispute for granted and is gradually building a narrative that the BJP will construct the Ram Mandir  –  all that he needs is another term at the Centre.

For the last 26 years, the Ayodhya dispute continues to be a burning issue. And whenever an election is around the corner, the BJP never ceases to bring this dispute to the fore.

What originated as an emotional issue has now been transformed into a political issue by the BJP - the party is busy garnering votes on the sentiments of Hindus.

The Congress, on the other hand, continues to shy away from talking about Ram, Ram Rajya and the Ram temple, hence ceding the space to the BJP.

Perhaps the party has failed to recollect that Mahatma Gandhi’s entire life was influenced by Lord Ram, and so were the movements led by him. He was the man who found solace in the Ram dhun, and even breathed his last, saying “Hey Ram”.

Yet, the Congress vacillates when it comes to Lord Ram and the Ram Mandir.

Also, we must remind ourselves that in 1986, Rajiv Gandhi convinced the-then Uttar Pradesh chief minister, Bir Bahadur Singh, to open the locks of the Ram Janmabhoomi temple to give Hindus access to the birthplace of their Lord Rama.

Also, after Mahatma Gandhi, it was Rajiv Gandhi only who envisioned the dream of bringing Ram Rajya to the country.

He further embraced the Ayodhya issue, and in November 1989, Rajiv Gandhi sent the-then home minister, Buta Singh, to Ayodhya to participate in the shilanyas ceremony of the temple. For me, it is hard to avoid the conclusion that had Rajiv Gandhi been alive, he would have resolved the dispute by now – bringing the two communities together, and we would have had a magnificent Mandir at the disputed site.

Even BJP leader Subramanian Swamy admires Rajiv Gandhi’s “noble efforts” to resolve the Ayodhya dispute, as he once said that Rajiv Gandhi would have built the Ram Mandir if elected prime minister for a second term.

Unfortunately, over the years, the Congress party has been in a quandary over the dispute, giving enough time to the BJP to attach itself to the politics of polarisation centered on “Lord Rama”.

Why the party is irresolute in stating the obvious is beyond my understanding.

The failure of the Congress to admit the Congress itself stood for the Ram Mandir has given enough space to the BJP. The Congress, fearing a backlash from the Muslim community, doesn’t even want to take the credit that it was their leader and former PM Rajiv Gandhi who had opened the locks of the Ram temple site.

If the party is trying to protect its Muslim votes, then it must remember that it has already lost a majority of Hindu votes owing to this timorousness to support a verdict in favour of the temple.

Sadly enough, whenever I try to bring this truth to light, Congress-leaning people troll me and label me a 'Sanghi'.

It feels ridiculous that we are living in an era where taking Lord Rama’s name brands one a 'Sanghi'. Many even believe that the demand to build the Ram Mandir is 'regressive'. So, does that mean that “liberalism” is all about “not building” your Lord’s temple? The most liberal countries in the world have the most magnificent churches.

When in 2007, during a dispute over the Ram Setu in the Sethusamudram Shipping Canal Project near Tamil Nadu, the UPA government claimed in an affidavit before the Supreme Court that Lord Rama did not exist and that the Ramayana has no historical basis. The party hurt the religious sentiments of millions of Hindus across the world by saying so. It was this very incident that damaged the Congress party the most, and it still has to bear the brunt of Hindu sentiment which couldn’t withstand the "harm" done to their religious beliefs.

After Congress veteran AK Antony highlighted the party’s pro-minority approach as one of the reasons for its tragic electoral performance in the 2014 Lok Sabha polls, the party and its leaders are striving for course correction. But the efforts will remain hollow as long as the party turns away from the Ram Mandir dispute. 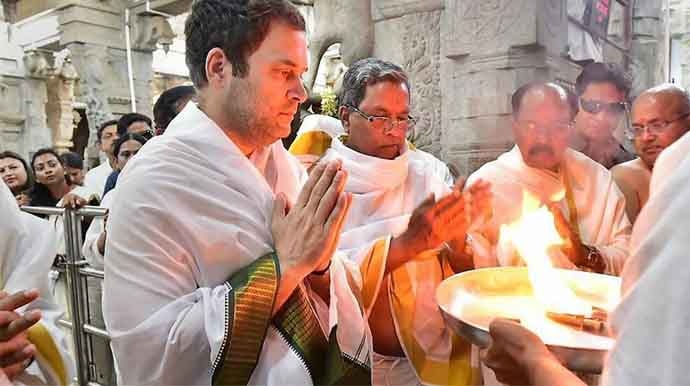 For its revival in the Hindi heartland, the party must identify itself with Lord Rama.

It’s a move that is long overdue. And I truly feel that only the Congress can be the real “unifier” in this dispute between the two communities.

The need for magnanimity

Ayodhya is sacred to Hindus, just as Mecca is to Muslims. Hindus share a strong emotional connect with the place – a connect that extends over thousands of years.

Those who oppose the Ram Mandir being built on this sacred piece of land fail to recognise the sentiments attached to the place. They must understand that there is no other Ayodhya and there is no other Ram Janmabhoomi. It is just this one place. And to respect the sentiments of the Hindu community, the Ram Mandir must be built where it belongs. A mosque can be built at an alternative place.

On a recent visit to Bali, Indonesia, I learnt how the people there revere Lord Rama immensely. Huge, stunning statues of Lord Rama adorn road intersections in Indonesia. There are even temples where "Ram Lila" is performed daily. When the love for Lord Rama isn’t inhibited in other countries, why do we shy away from embracing him?

On a recent visit to Spain, I got the opportunity to see the Sagrada Família, which will be the tallest church in the world after its completion in 2026. Imagine the sentiments of the people attached to this Barcelona church whose construction started in 1882 and continues to be built even after five generations.

Religion and faith are given due importance in every part of the world. So, what’s wrong if Hindus demand the same respect towards their religion? Why can’t we have a temple built in our reverence of Lord Rama?

For what we have failed to do till now, it’s time for both the communities to come together and show magnanimity.

Hindus must apologise for the demolition of the Babri Masjid and help Muslims to build a mosque at an alternate place. And Muslims must consider the Hindu community’s sentiments attached to the site and forgo their claim on the sacred Hindu land.

The final verdict must be in favour of the nation. To restore peace, to maintain its social fabric and to break free from the chains of polarisation, the Ram Mandir must be built, and the Congress should fulfill its role by uniting the two communities, which the BJP has divided, and thus win back the hearts of millions.

Also read: How did Lord Rama become a Hindu god?

#Congress, #Babri Masjid, #Ram Janmabhoomi, #Ayodhya
The views and opinions expressed in this article are those of the authors and do not necessarily reflect the official policy or position of DailyO.in or the India Today Group. The writers are solely responsible for any claims arising out of the contents of this article.