The time of the day, or night, when a woman should be outside her home or inside, is dependent on only one thing. Whenever she chooses to be.

For about at least two seconds when that video was playing in front of me and the man walked up to her and (possibly) held her face, I felt as if he knew her. As if maybe they share a common history, and perhaps he is entering a space where he has already been granted access by her. And then immediately after, the myth breaks.

It is this thought that made me feel most nauseated while I read about and watched in horror the numerous cases of sexual violation which transpired in Bangalore on New Year’s eve.

The fact that the man, while getting off from that motorcycle and making his way towards the woman, like a seasoned actor in a play, managed to convince me that there exists a justification inside his head behind his actions which followed.

I always was of the opinion, especially having grown up in the 90s in the pre-internet era, that any crime needs its fair share of preparation. It’s a chilling thought on its own, if you believe that the guard who’s supposedly protecting the four walls of your house, underneath his smiles is secretly conspiring to strangle you and your family with his gamcha. Or that your sibling who you grew up with and even shared knickers with, is maybe in the lookout to poison your tea to get a better share of your family property.

These were mostly the nature of reports on violence which newspapers during the 90s served. But the new era of crime is different. This is an age of entitlement. That’s why it’s the shadow of that man walking towards her which will keep haunting me the most every time I think of that night. There’s no sense of apprehension in that walk, there’s no doubt in his movements that he may not get what he’s out there to get. He’s assured, by an abhorrent system of both thoughts and governance which has crept its way into the moral structure of this country like termite, where he knows deep within his system that his minister also knows that “these things happen”. 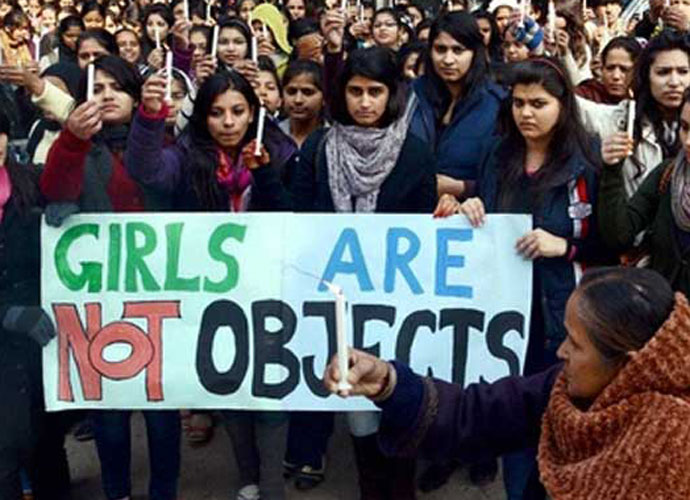 In his walk I witnessed the unflinching confidence of a reel playing in his mind, and by his I mean hundreds and thousands of us, where he’s the self-defined hero of a story in which he’s the caretaker of his own culture, thereby only responding to the despicable behaviour of these women who have bowed down to the “Western culture” and brought shame to his country. As if there is a clause in our Vedas that says: Raping women is fine if you’re doing it for the Indian culture.

If someone removes the woman from that video and I watched it without knowing, I wouldn’t be able to tell whether he’s going to molest a woman in the next few seconds or buy aloo chaat from a thela. It’s this relentless ever-growing irreverence towards other people’s space and privacy which needs to be corrected first. And if our elected representatives don’t stop blaming her clothes, her habits, her friends, chowmein or even the Chinese for being reasons behind sexual crimes, then it’s our responsibility, as voters of this country, to remind them that if they don’t change themselves then we will do what’s in our power to change who sits in their chair in the next term.

The time of the day, or night, when a woman should be outside her home or inside, is dependent on only one thing. Whenever she chooses to be. And if you are one of those who has been reading about Bangalore over the past couple of days and then starting a conversation about it with the words #NotAllMen, then this will be a good time to lock yourself up in a room permanently, because today's fragile masculinity is only tomorrow's act of sexual violence in the waiting bro.

Also read: CCTV footage of girl molested in Bangalore makes us sick to the stomach

Post your comment
#Bangalore molestation, #New Year's Eve, #Women's safety
The views and opinions expressed in this article are those of the authors and do not necessarily reflect the official policy or position of DailyO.in or the India Today Group. The writers are solely responsible for any claims arising out of the contents of this article.