Everything for 'Ebar Bangla'.

"When in Rome do as the Romans do."

Bharatiya Janata Party (BJP) chief Amit Shah seemed to be going by the adage when he came to West Bengal last week on a two-day visit to encourage party workers and leaders.

What could be a better way of touching a culturally-rich Bengali's heart than paying homage to the great Bengali writer Bankim Chandra Chattopadhyay, who gave the country its national song “Vande Mataram”?

Shah chose to warm up to the Bengali intellectuals and prominent persons by delivering a lecture on the nationalist icon, which was well-researched. The writer's evocation of Bharat Mata and the way he perceived her as Mother Goddess were tackled in detail to arouse the pride of Bengalis. Amit Shah at Tarapith to visit the Kali Temple, in Birbhum district of West Bengal on Thursday. Photo: PTI

Incidentally, the picture of Bharat Mata that adorned the dais was a piece of artistic creation by another Bengali. Famous painter-writer, Abanindranath Tagore's Bharat Mata composition was another milestone to tell the audience that BJP, largely known as a party of Northern India — the Hindi belt, was taken in by Bengali culture, literature and its heroes.

Apart from Syama Prasad Mookerjee and Swami Vivekananda, the party is trying to line up a set of Bengali icons in its pantheon to establish that BJP is respectful towards Bengal's great sons.

For the last one year, the party has celebrated the birth anniversaries of Rabindranath Tagore, Netaji Subhas Chandra Bose and Ishwar Chandra Vidyasagar, and participated in Rathayatra festival, Saraswati, Durga and Kali pujas.

The party’s instruction was to soak in the festive spirit of the Bengalis and use this as a platform to mingle and build connections with people.The idea was to absorb Bengali sentiments and their culture to gloss over the Hindi belt associations of the party.

BJP is known as a party of rich industrialists and the “pan-bahaar chewing and spitting baniyas”. "For once the party was smelling of Rajanigandha and juin flowers, which are so typical of any occasion in a Bengali home," said an intellectual, who was part of the audience. He was obviously not ready to be named.

It's important to soak in the flavour and fragrance of Bengal and try and be a Bengali at heart to be able to read the pulse of Bengal. Amit Shah has advised his brigade to do so. 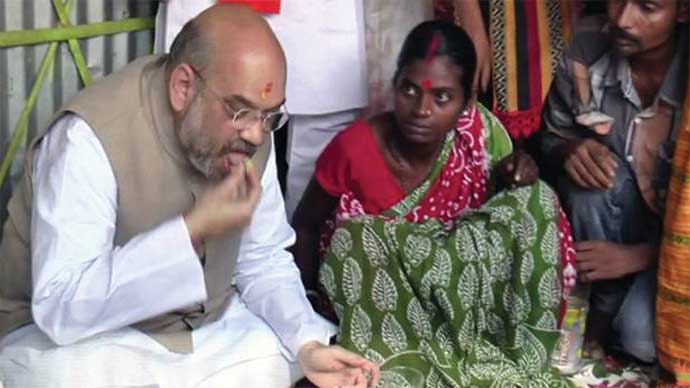 At the Viswa Bharati Convocation ceremony, Prime Minister Narendra Modi began his speech by uttering a few lines in Bangla. Amit Shah has also developed the habit of dropping a Bengali word here and there. The accent and pronunciation are jarring, but the efforts BJP leaders are taking to be perceived as “Bengali Babus” cannot be missed or ignored.

"Ebar Bangla" (this time Bengal) is BJP's slogan for the 2019 general election and in keeping with this, the party has prepared a blueprint.

Inviting former president Pranab Mukherjee, a person close to Bengalis’ hearts, to deliver the valedictory address to a batch of its trainees has been a masterstroke by the RSS.

The participation of a man of Mukherjee's stature and popularity in the RSS’ programme has established in a way that the Sangh is not “untouchable”.

Taking a leaf out of the Sangh’s book, the state BJP unit invited a group of intellectuals to be part of the audience for a discourse on Chattopadhyay.

Invites were sent to eminent authors, poets, painters and singers but other than writer Buddhadeb Guha, all prominent faces were conspicuous by their absence.

May be they thought a lecture on Bankim by Amit Shah wouldn't be exciting enough. They were also wary of being branded as being close to the saffron party. Evidently, BJP is very much focussed on its next destination — Bengal — and determined to win Bengali hearts.

Read this story in Bangla.

Post your comment
#BJP, #Bengal, #RSS, #Amit Shah
The views and opinions expressed in this article are those of the authors and do not necessarily reflect the official policy or position of DailyO.in or the India Today Group. The writers are solely responsible for any claims arising out of the contents of this article.