The much-vilified Indian police force – especially that of Delhi, Haryana, Jharkhand and now Jammu and Kashmir (J&K) – have a task at hand beyond their capabilities: that is, tracking the phantom braid-chopper.

This August, 65–year–old Mana Devi was killed by a mob in Agra, home to the Taj Mahal. She was believed to be a "witch" and accused of using sorcery to cut off braids. A few days later, a 40–year–old homeless woman and her nine–year–old boy were lynched in Jharkhand after a girl in the area reported that her braids had been mysteriously chopped off. This was perhaps the second braid-chopping death reported in the country. Internet services in Jammu and Kashmir had to be shut down when a frenzied mob stoned to death another suspected braid chopper, 70-year-old Abdul Salami Wani, in Anantnag in south Kashmir – the hotbed of terrorism in the region. Since September, more than 100 incidents of braid chopping or attempted braid chopping have been reported from different parts of the Kashmir valley. Widespread protests forced the J&K government to shut down internet facilities on mobile phones and impose curfew on five areas in downtown Srinagar.

Hysteria isn't new to India. As a young reporter, I remember covering the hitherto unparalleled incident of stone idols of Ganesha, a Hindu deity, drinking milk. Perfectly rational men and woman, all of whom earned their living by professing science and logic, that day suspended their disbelief. That day, they showed little faith in their training. Kolkata, the seat of Communist rule for 18 consecutive years at that time, ran short of milk. Eateries and pubs had no option but to serve black tea and coffee.

Commenting on the "phenomenon" later, Vishnu Hari Dalmia of the Vishwa Hindu Parishad (VHP), said, "I think it was a divine miracle. Scientists who dismiss it are talking nonsense. Most of them are atheists and communists."

Politically speaking, "atheists" and "communists" of those days are the rough equivalents of "libtards" and "anti-nationals" of today. 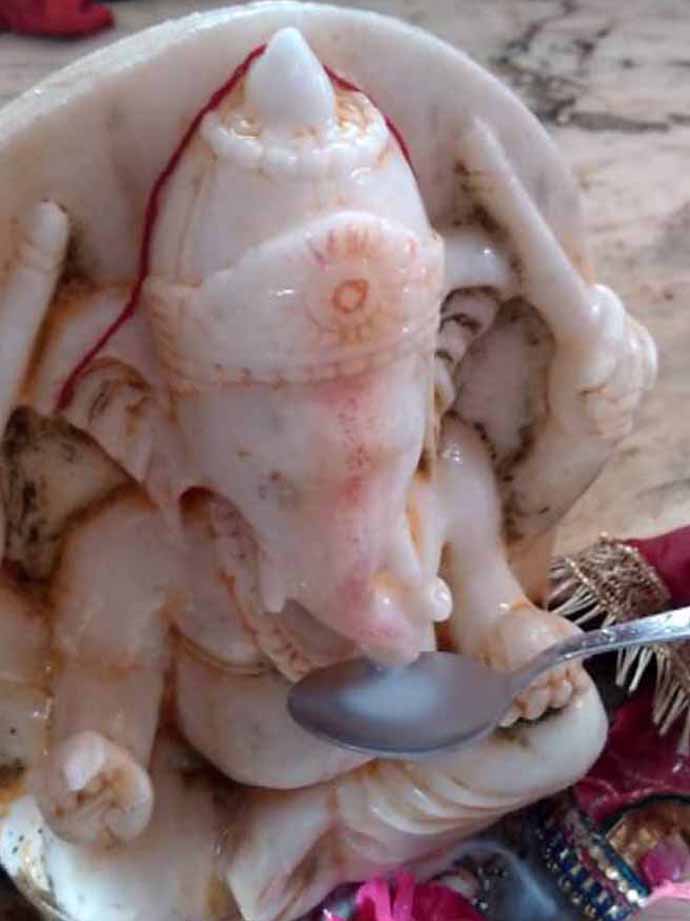 Who was behind making the physical phenomenon of "capillary effect" change into a "divine miracle", which went to possess the entire country? The IPS (Inter Press Service) in a prescient report pointed to political parties. Professor Chetan Bhatt in his book, Liberation And Purity: Race, Religious Movements And The Ethics Of Postmodernity, on new religious movements, said the "miracle" started with an "RSS member" visiting a temple in Southall, London. "The VHP and RSS were quick to mobilise their international networks to generate the miracle globally," he writes.

If we were to draw a parallel, while the culprits behind the "braid chopping" phenomenon are yet to be caught, it is easy to hazard a guess as to who they might be – persons who stand to gain from spreading a concoction of fear and religion. And here, the list won't be too long.

The age of social messaging

Subhash Chandra Bose's death in a plane crash while fleeing Japan as the Allied forces were closing in has always been a topic of serious debate. Recently, like many others, I too received a WhatsApp message about an alleged letter written by Jawaharlal Nehru to then British Prime Minister Clement Attlee, describing Bose as a "war criminal". At first glance, it appeared to be a smoking gun. Closer examination of the letter revealed it to be a poorly concocted fake.

Interestingly, the letter surfaced soon after Prime Minister Narendra Modi declassified 100 files pertaining to Bose. The newly declassified files, however, made no mention of such a letter. Soon enough, the hashtag #NehruKilledBose was trending on Twitter. No points for guessing who gained from this fake message, and therefore who was behind it.

A few years earlier, during a routine visit to the wine shop for my regular tipple, I was accosted by the owner with a WhatsApp message that listed names of people – mostly Congress politicians – who had allegedly stashed millions in Swiss Bank accounts.

"This is what the media hasn't and will not report," he said accusingly, repeating the last line of the message. "We need to check, counter–check facts, verify every last detail," I reasoned with him, not wanting to offend him. "But WhatsApp says so," he retorted and went off.

These WhatsApp messages about money stashed abroad away by some politicians somehow stopped circulating after the Modi–led BJP government came into power. I still wonder why?

Getting a taste of their own medicine?

Recently, a senior Union minister appealed to the public not to believe every social media message. In the last three–and–half years, the government has got a taste of the malevolent powers of social media.

As the Seventh Pay Commission – a government committee that revises wages and allowances of central government employees every 10 years – wound up, the Ministry of Defence (MoD) faced an odd situation. A letter that downgraded the rank and parity of the armed forces was travelling fast on WhatsApp across far flung formations of the military. The letter, purportedly singed by a senior bureaucrat and printed on a government letterhead, was marked "confidential" and looked just like an official communication.

Only, the letter was fake.

But by the time this came to the fore, resentment among the military for having been given a raw deal yet again was growing. Messages flashed on secured lines from formations to senior officers in the headquarters seeking clarifications. Exasperated, the MoD ordered an inquiry and the services sent out a signal – an official communication – to all formations to ignore the letter. The signal eventually managed to douse the fire that was spreading through the ranks.

The list of such fake messages is endless and how they affect people-at-large is equally illuminating. Web analysts at media houses will tell you that the topic of Mahatma Gandhi's apparent "sexual debauchery" – about which at least a hundred videos across social media platforms came up in 2013 and 2014 – trends each Gandhi Jayanti, his birthday.

But authentic documentaries about how Gandhi's philosophy of non-violence got African-Americans in the USA their rights and coloured people in South Africa their freedom have no takers on social media. Just an aside – despite the years, Gandhi isn't yet obsolete. The Catalonian movement for freedom from Spain is inspired by Gandhi and is being carried out according to his philosophy of non-violence.

What do these messages have in common?

I am sure all of us have received such messages over social media. They generally have a few common things.

These messages, typically, are about a conspiracy – Nehru was behind Bose's disappearance.

They are sent by ordinary people, some whom we may know and therefore tend to believe.

They seemingly have an altruistic motive, such as making you aware of things that governments, judiciary, media, and other mainstream institutions have long known about but have manged to keep a secret.

There is also another interesting aspect to these messages – they play on our gullibility and our lack of will to verify.

We are a strange country, indeed.

Are rumours and propaganda the same? Not according to the dictionary, but the line is thin, especially when the latter is done cleverly and borders on the sinister. And that is precisely what we are encountering today. Innocuous rumours and falsehoods are spread to propel people in a particular direction. In the past, both the Left and Right have depended on propaganda. For instance, the Bolsheviks also used propaganda and the "economy of truth" to rally people.

Nazi Germany is another example of using propaganda very effectively, and six million Jews were incinerated before the propaganda could be brought to an end.

Down the years, the USA would use propaganda, though in a more artistic manner. Think about the Rambo series – how John Rambo, the indomitable US Special Forces commando, fought in Vietnam and Afghanistan against the evil Communists? The message was always one: the good guy – the USA – taking out the bad guy – Russia.

But what we face today is more sinister than plain propaganda. In the age of classical propaganda, one knew where the messages were originating from and what these messages intended to achieve. That is not the case in the present times. Given both the anonymity of the messenger and gullibility of the receiver, it has become easier to mislead people.

However, we aren't alone in this today. Both France and the USA, which went to polls in the recent past, are grappling with fake advertisements on social media that could have influenced the outcome. Not long ago, in a signed post, Facebook chief security officer, Alex Stamos, said fake accounts put out advertisements on issues such as guns, race, and immigration that were focused on sowing seeds of disunity rather than on promoting a particular candidate.

What made us the republic of rumours?

Earlier this year, global communications and marketing firm Edelman published the 2017 edition of the "Trust Barometer". The results are shocking. It states that trust in "the institutions of business, media, government and NGOs" has all but disappeared. "Technology has allowed the creation of media echo chambers, so that a person can reinforce, rather than debate, viewpoints."

About "59 per cent of respondents" would believe a "search engine" over a human editor, is one of its conclusions. The survey was conducted across 28 countries and had over 33,000 respondents. It finds at least 50 per cent of people no longer believe in institutions that, in previous decades, were the pillars of society: businesses – expected to innovate, produce wealth for society; government including the judiciary – which acts as the referee and regulator; the media – that acts as the watchdog; and NGOs – the conscience-keepers of society.

Globalisation has had a fascinating innings of nearly 70 years since the end of World War II. Despite a few bumps like the Cold War or the invasion of Iraq and Afghanistan, never before in the history of mankind have things been so great. Poverty, riding the increasing trade flows across the world, has declined. Advancement of science and technology has made distance irrelevant.

But now, the party appears to be souring. Increased automation threatens jobs and livelihoods of communities on an unprecedented scale. The 2008 recession that wiped out life savings of people and countries has only added to our fears.

Use of cheaper communications at times borders on the sinister and has led to the implosion of trust. What cheaper communication has done is perhaps best described through the "Butterfly Economics" of Paul Ormerod. He borrows from the Chaos Theory to say that a butterfly beating its wings has the potential to cause a tornado on the other side of the globe and concludes "that individual decisions in a social community are influenced by information provided by the behaviour of others".

No one can be sure how exactly things will pan out. But when the rise and acceptability of a political idea depends upon on how much hate, fear and divisiveness it can spread, it would be good to remember the prophetic warning of Heinrich Heine: "Where they burn books, they will also ultimately burn people."

And the people's republic of rumours is only a step in that direction.

Also read: Why Zakir Naik's presence in Malaysia is a threat to the region's stability