No ODIs, no IPL games, still Pujara has clawed his way to 50 Tests

Cheteshwar Arvind Pujara’s Test career already appears to be as long as his name. More so because of the stops that have been handed out to him than the many starts that he’s built for the Indian team.

For once, the media appears to be buzzing with Pujara, because of something other than his long marches with the bat. On August 3, 2017, when Pujara takes the field against Sri Lanka, it will be for his 50th Test match.

The long imposing Test shadows of Tendulkar and Dravid are long gone. There isn’t quite a Test master in the Indian team as Pujara but yet, will he or rather can he ever get the respect and recognition that he deserves? For that to happen, perhaps, Test cricket will first have to garner some of that respect and recognition. Unlikely as it sounds, it can happen and has happened. It’s rather simple – the Indian batsmen need to collectively dig a hole, and Pujara has to dig them out of that hole.

Pujara’s batting is anything but sexy for most people. Except probably me, I find him, to put it quite bluntly, more watchable in a Test match than any Indian batsman – even Virat Kohli on song. Virat Kohli in the eye of a storm, battling it out though, is a very close second.

Che Pujara is and has been my favourite batsman for a long, long time. Possibly from the day I decided to call him that. It appeared to me, after Sehwag, here was another great cricket investment – one that I was connecting to, almost subconsciously. And much like Sehwag, I could tell with Pujara, when he would score, when he wouldn’t, when he would fall early, often, eerily, in the precise over.

It had to be one of those weird cosmic things. Then one day, Siddharth Monga of ESPN Cricinfo, contacted me, to write his magnum opus on Che Pujara. We spoke of many things Pujara – from how Che Pujara came to be, to my insecurities of Pujara’s place in the team, how it would always be under threat, as he will never be a star batsman. Of how being solely a single-format player, his place in the team would always be under threat from one of those two format (ODI and T20) star sports’ players. 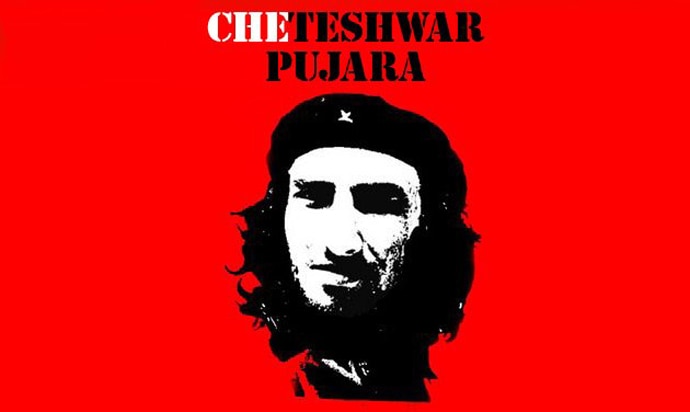 I was travelling, and off cricket, when I read Monga’s piece. It was both emotional, and liberating – and strangely, from that day, I stopped worrying about Pujara. About the runs he made, the runs he didn’t, whether he would be picked or not. It was as if Monga’s piece which went deep into the early struggles of Che Pujara, the cricketer, documenting the family’s tectonic shifts in residence chasing cricket across India, had placed such a warm, tight embrace around Pujara – and with it, taken the world at large with it, to know and embrace Pujara, that I could just relax a bit, and enjoy his cricket, in a detached way. Where it wasn’t about Pujara so much, but his cricket.

I returned to watching Pujara again, with his 153 in the first Test. The focus was on Shikhar Dhawan’s 190. It was off just 168 deliveries. Pujara’s 153 took 265 deliveries. Much as I thought I was detached, I was waiting for someone to take off on the strike rates again – even though Pujara was striking at 58, Dhawan was flying at 113. Kohli didn’t score many, so I reckoned that would shut the strike rate baiters a bit. And then Rahane scored his 50 at a strike rate of less than 50. That was that, Pujara’s workmanlike 150 was safe from the hungry mob.

But what about me? Why was I being drawn into my age-old Pujara paranoia? Just when I thought, I was done with it. When Pujara was dismissed though, I shrugged a little, got up, investing myself in something other than cricket.

When Pujara returns to play his 50th Test, walking in to bat, I’ll be standing, serving him a light applause, and feeling pretty damn good about one of my best cricket investments ever.

He was here and now, in my present.

He was on the field.

He was in my mind.

He was Che Pujara.

Post your comment
#Tendulkar, #India, #Test Cricket, #Cheteshwar pujara
The views and opinions expressed in this article are those of the authors and do not necessarily reflect the official policy or position of DailyO.in or the India Today Group. The writers are solely responsible for any claims arising out of the contents of this article.